Free-flow electrophoresis (FFE) is a separation technique that utilizes a pressure driven flow in combination with a perpendicular electric field to drive separation (Figure 1). To split the sample based on differences in charge, a carrier electrolyte fluid is mixed with the sample prior to being loaded in the device (Figure 2). Based on the differences in electric charge, the different components of the sample split into different lanes and can be individually collected and analyzed. 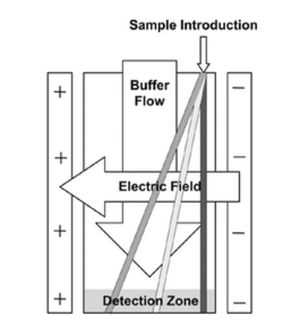 Other than electric charge, additional ways to move and separate particles includes sound, pressure, size, temperature, weight. Each method involves unique challenges and it selected based on the properties of the sample. Electric charge is selected for separating proteins due to the electrical charge differences of various proteins.

FFE is often used on the large scale for sample purification and on the small scale for continuous real-time monitoring of a sample. Additionally, future applications of micro-scale FFE could be in point of care devices to analyze patient samples [3]. 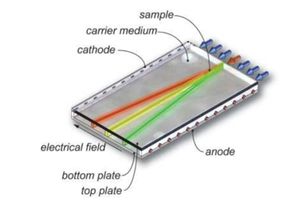 Figure 2: Free-flow electrophoresis allows for the separation of analytes, represented by red, green, and yellow lines, in a sample utilizing an electric field. Image adapted from Ref. 3. 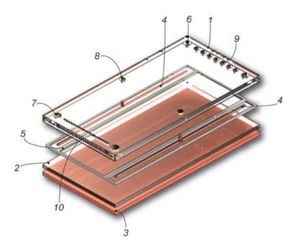 Figure 3: Diagram of the different components of a FFE that are assembled in the fabrication process. Image adapted from Ref. 3.

A large-scale FFE device is a chamber with two insulating plates, typically glass or polymethyl methacrylate (PMMA), shown in Figure 3. The two insulating plates are separated by several hundred micrometers using a membrane spacer, typically cellulose nitrate, to create a separation chamber. The membrane spacer determines the FFE device height and has the ability to conduct and electrical current [3].

There are three main regions of the device: the separation region, anode bed, and cathode bed. The separation chamber is located in the center of the device and the electrodes are attached outside this chamber to minimize the movement of particles within the chamber. A continuous electric current is applied to the device for a constant electric field to be applied to all particles and to continuously remove bubbles generated within the device. Due to the device being on the macro-scale, heat is unable to dissipate through the device and into the environment, therefore the device is often placed on a cooling plate to remove heat generated from the constant electric current, preventing the possible degradation of the samples. Additional challenges FFE devices face in large-scale are heat accumulation and efficiency in sample analysis [3].

In micro-scale FFE, the components of FFE devices are the same as large-scale devices with two insulating plates and a separation chamber. Many of the challenges faced in the large-scale devices are overcome in micro-scale. Heat is able to dissipate through the devices more efficiently due to the decreased thickness of the membrane spacer, therefore device overheating from an electrical source is a lesser concern [3].

Manufacturing of micro-FFE devices require special consideration because the materials are often too thin to handle. Techniques such as injection molding and milling, common for microfluidic devices, are utilized in the production of these devices. Additionally, alternative materials are often used for the membrane due to the necessary width of tens of micrometers. Challenges micro- FFE devices face that need to be considered in the membrane design are removal of gas and chemical side products without disrupting or contaminating separated samples, constant and uniform electric fields, and good voltage efficiency. Several design strategies are used to addressed the changes to the membrane in micro-FFE devices including electrode placements in relation to the separation chamber [3].

Challenges faced in the micro-scale include poor voltage efficiency due to the similar size of the separation chamber and the membrane spacer structure. Additionally, the membrane is thinner in a micro-FFE device, leading to low electrical resistance, leading to leaks in the device by the electrode ends [3].

Figure 4: Application of a micro-FFE device used to separate a solution of tagged primary amines. Image adapted from Ref. 5. 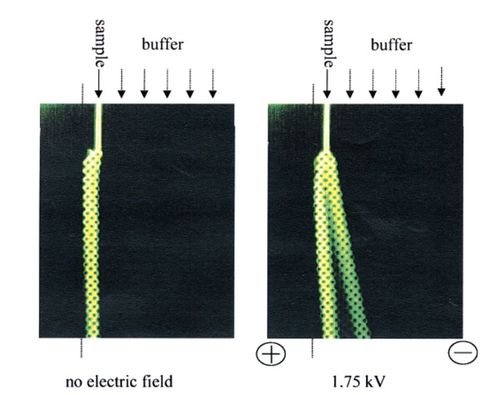 Figure 5: Application of a micro-FFE device used to separate a solution of fluorescent amino acids using a separation chamber with pegs to assist in heat transfer, device support, and flow guides. Image adapted from Ref. 7.

One of the biggest advantages to FFE and micro-FFE in particular, is the ability to continuously monitor a process in real time through continuous sampling through a FFE device. FFE devices are being used in purification processes such as protein separation in conjunction with HPLC and mass spectrometry to improve upon current analytical techniques (Figure 4) [6].

One example of FFE devices is in the separation of fluorescently labeled amino acids for on-line monitoring. Typically in FFE devices, the separation chamber is empty space, however in this application, the separation channel contained posts throughout the chamber (Figure 5). These posts serve to act as flow guides for the sample, support the top insulating plate made from (PDMS), and increase the heat dissipation by increasing the surface to volume ratio. When an electric field was applied, the sample split into two component streams that were later identified using analytical methods. Figure X shows an image of the FFE device and the component streams separating based on electrical charge [7].

Currently, most of the work on micro-FFE is laboratory scale and there are not examples of industrial applications of these devices in practice. There are several proof of concept studies using fluorescently tagged proteins to determine the presence of an analyte of choice. As the challenges associated with micro-FFE are addressed, micro-FFE devices could be applied in chemical process monitoring, point of care diagnostics, and protein separation [6].