Before spending time and resources in the wet lab, we wanted to model the biological systems in silico to better our understanding. A relatively simple, yet powerful, mathematical method is the use of Markov chains. 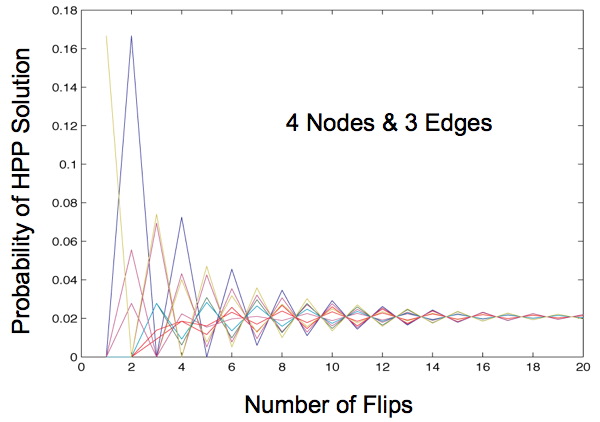 Question: Will the initial order in which we place the edges in our E.coli computers affect the probability of us detecting a Hamiltonian Path?

Our mathematical reasoning relies on the fact that the Hin/hixC DNA recombination system makes a large number of flips and for any one flip there is some element of chance that dictates which hixC sites are chosen to flip.

Answer: We developed a Markov Chain model in Matlab that takes every signed permutation of edges as a state. Matlab then finds the connections between these states and categorizes them using both the number of edges that need to be flipped to move between those states, and which specific edges needed to be flipped. Further, our Matlab program creates a transition matrix based on user-inputted weights to bias the probabilities of making flips of varying sizes.

Once this transition matrix is generated, we compute, for each possible starting state, the probability that the starting state will transition to any of the solved states after x flips, given the biasing of different types of flips. When our Markov Chain model is run for more than 2 edges we always observe a convergence of these probabilities, regardless of any initial bias. This shows that starting orientation does not matter, since the probability of being solved after a large number of flips is the same for each starting orientation.

Poisson Model For the Number of Plasmids

How many E.coli computers?

Question: If a Hamiltonian Path exists in the graph, how many E.coli computers do we need to have working on the problem to be highly confident that at least k of our computers will find it?

Our mathematical reasoning relies on the fact that the Hin/hixC DNA recombination system makes a large number of flips, and for any one flip there is some element of chance that dictates which hixC sites are chosen to flip. Note: This has now been shown to be true, but it needs to be stated that our math relies on it.

If this is the case, then our E. coli computers will be equally likely to have flipped into each possible signed ordering of edges by the time we screen our results. For more details on this see the above section about starting orientations.

We can use a cumulative Poisson distribution to answer this question.

Poisson is an appropriate distribution to use since:

For example, examine the Adleman graph. It has 14 edges and 7 nodes. This means that a Hamiltonian Path is represented in our plasmids by 6 edges in the proper order and orientation followed by 8 edges in any order and in any orientation.

We can then solve for m depending on how confident we want to be. If we use m=1 billion plasmids, then we expect to find the Hamiltonian Path when one exists 99.92% of the time.

Using this statistical method we made a chart showing the probability of finding true positives based on the number of plasmids for the Adleman graph.

The crux of our experimental design is the simplicity of detecting answers phenotypically. Unfortunately, there exists the possibility that a phenotypically-correct colony may have an incorrect genotype. Although it looks like it has computed a solution, in fact it has not; this is known as a false-positive. We estimated the ratio of false-positives to true positives using Matlab simulations for several graphs. 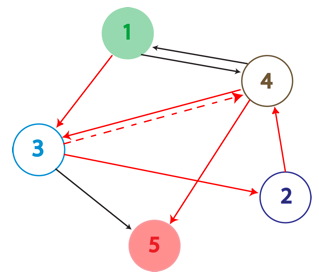 Highlighted in solid red lines is a Hamiltonian path. The dashed line shows where a false-positive can occur.

An example of a Hamiltonian Path in the above graph is shown with solid red arrows; below, its equivalent on a plasmid. There are in fact many possible true positive answers. Their PCR fragment lengths are identical, but the edges after the Hamiltonian path, following the transcriptional terminator node 5, can be arranged in any order. Some of these true positives might show the same path, whereas others may be different.

The plasmid orientation for a true solution.

The plasmid orientation for a false-positive solution.

Below are two graphs that show how quickly the number of possible orderings of edges grows when the instance of the Hamiltonian Path Problem increases in the number of edges and nodes. This makes a Hamiltonian Paths harder to detect. Also, from these graphs you can tell that even though the graphs are becoming complex, there is still at least a 1 true positive for every 20 positives. 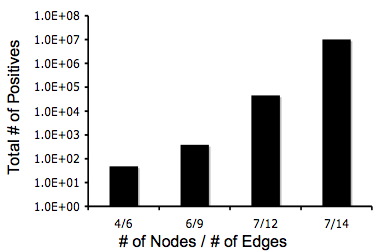 The total number of positive solutions for several different graphs, whose edge and node counts are shown.