In 1994 Adleman developed a system to solve the Hamiltonian Path problem using DNA in vitro. We have implemented a bacterial system to solve Hamiltonian Path problems in vivo. Our bacterial computer works by taking advantage of the Hin Recombinase protein and hixC sites to perform a "flipping" operation. By strategically placing hixC sites on a plasmid, along with reporter genes, we can simulate paths on a graph through flipping.

Salmonella typhimurium is a bacterium that moves using flagella. Depending on its environment, it expresses different sets of surface proteins on its flagella. It is able to change this expression through the use of Hin Recombinase and hixC sites. The Hin Recombinase enzyme catalyzes the inversion of DNA that lies between a pair of hixC sites. By flipping DNA segments between hixC sites S. typhimurium can express alternate flagellar surface proteins.

In the 2006 iGEM competition, Davidson and Missouri Western used Hin Recombinase and hixC to model a mathematical problem, called the Pancake Flipping problem. The problem is the following: given a stack of pancakes which are burnt on one side and golden on the other, and two spatulas, what is the minimum number of flips required to sort the stack by pancake size and with all burnt sides facing downwards?

How many flips does this take?

Using mathematical models it is possible to compute these estimates for small stacks. However, adding pancakes to a stack increases the number of possible permutations non-linearly. The number of possible stacks of n pancakes is equal to: 2^n (n!). Thus traditional computers are not well-suited for computations involving large pancake stacks.

However, it is possible to model pancake flipping using bacteria. If each pancake is given an identification number, along with a sign designating its orientation, then this can be stated equivalently using genes. Thus the following images show equivalent notations for pancake stacks:

A stack of pancakes.

Genes on a plasmid.

By taking advantage of this notation it is possible to use bacteria as computers to solve pancake-flipping problems.

We have demonstrated that it is possible to solve mathematical problems using bacteria, though it may not be obvious why bacterial computers are helpful. Although the initial programming of bacterial software is expensive and slow when compared with standard computer software, the hardware costs of each bacterial computer are negligible.

Others have emulated computer logic in vivo, yet the practical value is limited by the ease with which bacterial software can be programmed. Furthermore, traditional computers are already adept at logic and arithmetic.

Instead of adapting an electronics mindset to a bacterial system, we envision another type of bacterial computer that benefits from the ease of hardware fabrication through bacterial growth and minimizes the dependency on algorithmic sophistication. It is desirable, but not always possible, to develop efficient algorithms that reduce computational time. In the absence of an efficient algorithm, the only way to decrease the time until a solution is found is to buy more hardware. For problems of this type, bacterial computers have an innate advantage over traditional computers. 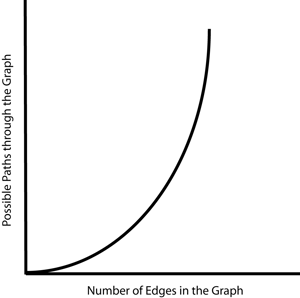 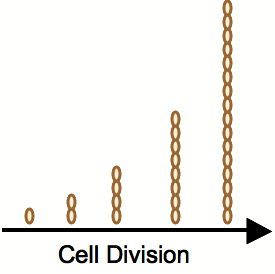 Exponential cell growth maintains parity with the exponential increase in graph complexity. Bacterial computers are so cheap to produce, that they could theoretically be more efficient than traditional computers at solving complex problems that have unsophisticated algorithmic solutions.