Stalled replication forks are a serious threat to eukaryotic cells, since replication forks that become stalled for long periods of time can undergo fork collapse when DNA polymerase and other replication machinery falls off or the fork can break and form a double stranded break. Upon sensing that a replication fork has stalled, a signaling pathway is initiated in order to halt cell cycle progression, allowing time for the fork to restart without additional stress. Since eukaryotes have multiple origins, if the fork is unable to restart, often replication is completed by a second replication fork coming from the other direction or a dormant origin that has been initiated. If all else fails, the cellular machinery responsible for homologous recombination repairs the stalled fork. Sometimes, however, in the presence of homologous regions of DNA, the strand exchanges with an incorrect template which can lead to non-allelic homologous recombination (NAHR) causing gross chromosomal rearrangements (GCRs). This study used Schizosaccharomyces pombe fission yeast as a model organism to study how stalled replication forks can lead to chromosomal rearrangements when improperly repaired. [1,2,3]

The authors created strains of S. pombe with inducible replication fork blockages by inserting the replication terminator sequence RTS1. A protein called Rtf1 is a DNA binding protein that can induce fork arrest by blocking progression of the replisome. The construct RuraR shown in Figure 2 contained two RTS1 sequences and the ura4+ gene between them, a second construct RuiuR was the same as RuraR with an additional inverted ura4+ gene and a spacer. Special probes, labeled pA and pB were used with a Southern blot to determine the amounts and types of chromosomal rearrangements upon induced blockage in these strains. RuiuR was found to have tenfold higher occurrence of GCRs than RuraR.

Rpal1 and Rpal2 were two other strains that replaced the centromere proximal ura4+ with his3+ of 0.2 kb and 1.8 kb respectively. Strain Tpal1R and Tpal2R replaced the tel proximal RTS1 with TER2/3 two sequences that cause pausing but not blockage of polymerase. The authors predicted that Rpal1/2 would have reduced levels of GCR and that Tpal1R/2R would have no GCR that occurred. In contrast they found that all of the constructs had some GCR occur, but that strains with double RTS1 sites had higher levels ~30%. In Rpal1/2, however, the sizes of the observed fragments were unexpected. Instead of corresponding to a NAHR event between the two RST1 site was consistent with double the distance between the BglII site and the center of the palindromic sequence. This suggested that, after restart, the polymerase did a “U-turn” resulting in an isodicentric chromosome.

In order to investigate this behavior further, a number of constructs were made containing palindromic sequences of varying length with spacers inside the palindrome of varying lengths to observe the effects on likelihood of U-turn occurrence while maintaining the center of symmetry the same distance from the stalled fork. Longer palindromes and smaller spacers had higher occurrence of U-turns. A third experiment using another series of constructs of the same palindrome and spacer length explored the idea that the center of symmetry was important for the likelihood of U-turn occurrence. The most U-turns occurred when the palindrome was directly next to the stall, suggesting that replication restart is initially very error prone, but upon “maturation” is better able to replicate without error although the observed rates of error are still higher than those normally observed. It is important to note that no DSB intermediate was formed for any of these replication forks. 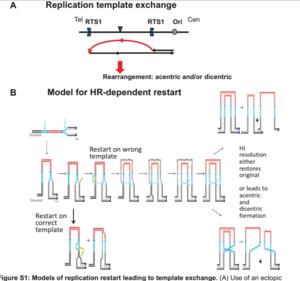 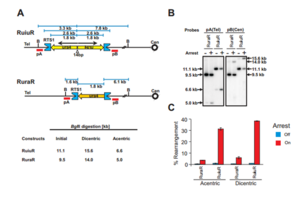 A. Cartoon of RuiuR and RuraR Cen3 indicates the centromere, tel indicates telomere, and red boxes indicate the RNA probe site. B is the BglII restriction sites. B. Southern blot for each strain with and without induced blockage C. Quantification of rearrangements[1] 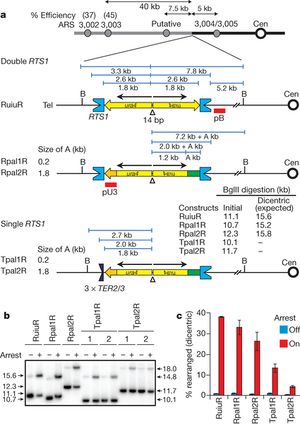 A. Yeast constructs. B. Southern blot for each strain with and without induced blockage C. Quantification of rearrangements[1]