DNA integrity is essential to life. However DNA is constantly subject to assaults from endogenous species, such as oxygen radicals, alkylating agents or replication errors. Or from exogenously generated agents like UV light and X-rays. DNA damage could manifest in the form of single-strand breaks, double- strands breaks, insertions, deletions or the formation of bulky adducts. Figure 1 below shows some common DNA damaging agents and some repair mechanisms [1]. 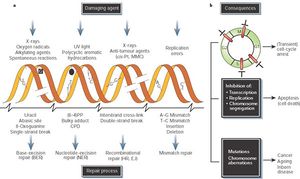 Chromosomes Double-strand breaks (DSB) in particular are troublesome because a single unrepaired DSB could lead to chromosomal instability or cell death [2].There are two ways in which organisms can repair DSBs; Non Homologous Ends Joining (NHEJ) and Homologous Recombination (HR). HR is a very important repair pathway in mitosis and in chromosomal exchange during meiosis [2]. Therefore HR is highly regulated. HR goes through three phases: presynapsis, synapsis and post-synapsis. In the presynapsis phase as a response to DSBs several sensor proteins detect the DSB and send signals to mediator proteins that activate effectors that repair the damage. Figure 2 below is a simplified representation of this process [3]. 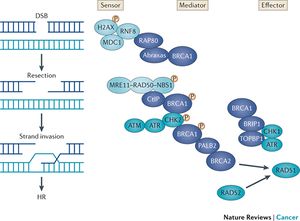 The focus of this study [4] is on the breast cancer susceptibility protein (BRCA2) and its goal in mediating the binding of the central protein in recombination (RAD51) to ssDNA, replacing replicating protein A (RPA) and stabilizing RAD51-ssDNA filament formation. All the previous knowledge about this protein came from studying its fragments or exploring its orthologues. Because of the large size of BRCA2 it was very difficult to induce and purify a functional full length BRCA2. Dr. Kowalczykowski’s group was able to clone and purify the full length human BRCA2 (3,418 amino acid) . This was successfully done by adding two tandem repeats of the maltose binding protein tag (MBP) at the N terminus of the protein (increasing the size to 470KDa) and expressing the construct in human 293TD cells. Cloning was verified by Western blotting on the C-terminus region and the MBP tag. The two MBP tags did not affect the function of BRCA2 as tested by comparing cell survival between brca2 mutant cells and brca2 mutant cells transfected with 2XMBP-BRCA2.Furthermore to confirm that the purified BRCA2 protein was folded correctly and biochemically active, this group used pull-down assays to test its interactions with recombinant proteins that were previously shown to interact with BRAC2 fragments. BRAC2 interacts with the strand-exchange protein (RAD51) and its Meiotic counterpart DMC1. Despite a report that BRAC2 interacts with the ssDNA-binding factor, replication protein A (RPA), no significant interactions were detected.