Introduction to Synthetic Meats and Organs

"Fifty years hence, we shall escape the absurdity of growing a whole chicken in order to eat the breast or wing, by growing these parts separately under a suitable medium." - Winston Churchill 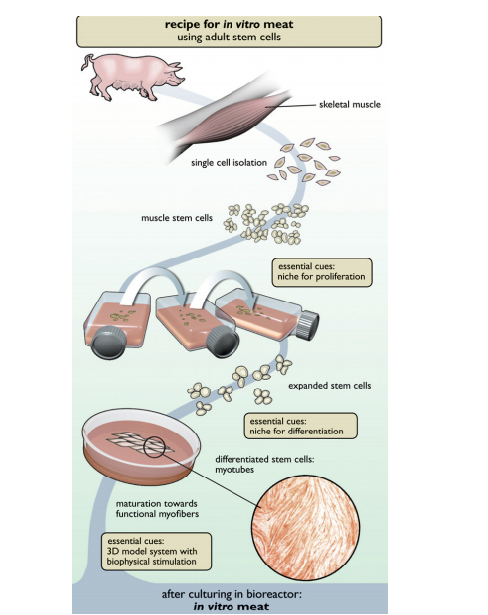 Since the advent of tissue engineering, the desire to create lab-grown replacement organs has accrued significantly in order to fulfill the needs of transplant patients. When organs deteriorate or fail due to issues like disease or adverse drug treatment effects the need for transplantable organs arise, but the demand is not always satisfied due to a lack of donors. In fact, over 100,000 patients are on the recipient waiting list and over 6,000 people die from the lack of a donor organ every year[2]. In some cases, the compatibility of the donor organs, instead of the lack of donor organs, can be more of a major issue. In vitro organs are potential solutions because these organs can be grown tailored specifically to each patient. In vitro organs are organs grown outside the body. In vitro organs are also known as synthetic organs. The main objective of research in synthetic organs is to maintain and direct the overall development of the organ's architecture.

In an environmental standpoint, in vitro meats could potentially cut down the carbon emissions caused by the slaughtering cows and producing cow feed. The raising, slaughtering and disposing of cows lead to the release of carbon via methane emissions or fossil fuels. Also, the requirement of feed forces a toll on the environment which prevents the efficient use of land. For example, cows require extensive grazing lands in order to grow. This unbalanced allocation of land is wasted on cow and other grazing animal where instead crops could be grown. For kilogram of beef produced, an estimated equivalent of 14.8 kilograms of carbon dioxide is produced. For comparison, one gallon of gasoline produces 2.4 kilograms of carbon dioxide(0.38 kilograms of carbon dioxide per kilogram of beef)[4]. World meat production contributes about 20% of total carbon emissions[4]. With in vitro meats, the need for slaughter houses and grazing lands would be diminished, focusing such lands to be placed under other roles. However, some look at this alternative solution skeptically, proclaiming that the mass production of in vitro meat will be counterintuitive in terms of carbon emissions.

Arguably, research conducted by the National Aeronautical Space Administration (NASA) into in vitro meats paved a way to encourage the scientific community to further the progress. In 1999, Willem van Eelen M.D., Wiete Westerhof Ph.D., and Willem van Kooten filed for a worldwide patent on a process to produce in vitro meat which required a matrix collagen to be seeded with muscled cells[5]. Although a patent was already filed, success in the in vitro meats fields has been credited to Benjaminson, Gilchriest and Lorenz[5]. Their research showed that edible meat could be produced from goldfish but proved infeasible for mass production[6]. Soon after, NASA eventually ceased funding in vitro meats research. In 2004, Jon F. Vein also held a patent (U.S. Patent 6,835,390) for the production of in vitro meat for human consumption from muscle and fat cells. Research in synthetic meats was encouraged by People for the Ethical Treatment of Animals (PETA) who offered a million dollar prize to the first company to offer in vitro meats to consumers[5]. Without a demand for in vitro meats, in vitro meats would not make little headway; therefore, this prize that was announced in 2008 greatly fuels the race to industrialize this field. The deadline for the prize has been extended to some date in 2013[7].

In vitro organs research evolves as new techniques in tissue engineering are uncovered. On June 9, 2011, the first synthetic organ was transplanted into a human subject with trachea cancer. A trachea composed from stem cells was placed into a 36 year old man at Karolinska University Hospital in Stockholm[8]. This is a huge step forward in the in vitro organs research.

In brief, there are currently two proposed approaches in the production in vitro meat: embryonic stem cells and satellite cells (progenitor muscle cells). Initially, muscles cells start with mononucleated myoblast of limited cellular division properties. As these myoblasts fuse into multinucleated myotubes, muscle fibers are created without proliferative properties. Both embryonic stem cells and satellite cells give rise to myofibers, but their approaches are fundamentally different. Embryonic stem cells are favorable for their unlimited proliferative ability but may inaccurately restart myogenesis. Contrastingly, satellite cells are favorable ability to accurately restart myogenesis but have limited proliferative properties. In a way, this is a fundamental debate of quality versus quantity. Nevertheless, either embryonic stem cells or satellite cells are cultured in a bioreactor in order for the cells to fuse into muscle fibers which requires a perfusion system. The perfusion system supplied by the bioreactor can deliver both nutrients and oxygen while expelling wastes[9]. The scaffold system directs the growth of the myofibers. The scaffold based method produces a thin myocyte layers at a time, hence the name shmeat- sheets and meat. There isn’t a need for a specific scaffold system, but current research favors the collagen matrix to aid in shaping the meat. The scaffold only needs to be as tough as the meat produced. Lastly, the muscle needs to be excercised for optimal growth.

Breakdown of In Vitro Meat process[10]: 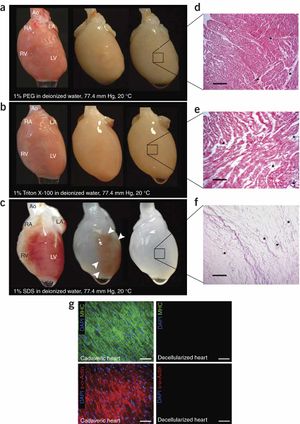 In the field of in vitro organs, all techniques require scaffolds in order to mold the cells according to their needed shape. This is achieved through various scaffolding techniques.

In 2010 IGEM competition, MIT underwent a project that sought out smart tissue that would proliferate in response to mechanical stress. Essentially, MIT presents a new approach to in vitro organ growth without the need of a scaffold. Specifically, in vitro bone tissue was created to sense mechanical stress and differentiate accordingly. Moreover, where more mechanical stress is found, the bone density in that region would be higher to compensate for the high stress. This smart in vitro bone tissue contains mechanoreceptor promoters that are able to sense the stress. This promoter regions are RE/CRE2 and NR1/2 that confer sensitivitiy to shear stress in shake tests.[13]