Cellular scaffolding is used in biomedical engineering to support tissue growth, usually during the process of tissue regeneration or tissue engineering. Scaffolding has been in use since the 1980's in an effort to support tissue growth and early structures used sponge-like biomaterials, which were useful, but limited for a number of reasons. Modern fabrication techniques have been developed over the past few decades to create new kinds of scaffolding that are more suited to grow a diverse number of tissue types. Modern scaffolds need to fulfill several requirements to viably support and guide the development of cells and tissues in vitro [1].

3) The scaffold needs to be rigid enough to support tissues, but porous enough to diffuse oxygen and nutrients to the cells inside. If the scaffold is poorly designed, it could collapse or starve the cells growing inside the scaffold [3][2].

4) The scaffold should be able to guide the development of new tissues. Pore size is a major factor in guiding tissue development. Most tissue cell types differ in size and, consequently, will not grow as well on scaffolds with pore sizes that are either too small or too large for that particular type of cell. For example, if the pore size is too small then the cells will not be able to migrate inwards and won't allow nutrients to flow through the scaffold. If the pore sizes are too large, then the surface area for cells to attach decreases which limits cellular adhesion [4].

5) The scaffold should degrade in a controlled manner as the developing tissue becomes able to support its own weight.

Cells can also be grown in vivo onto scaffolds by implanting scaffolding directly into the patient. This has been used for bone regeneration if large parts of bone are missing [5]. 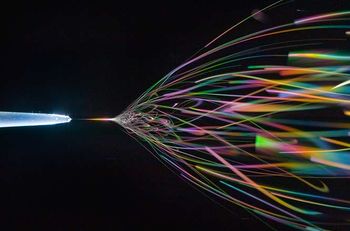 An artful picture of electrospinning. Multiple threads are shown in this photo due to a prolonged exposure shot. Picture taken from www.plantandfood.co

In this process, high voltage is applied to a capillary tube filled with a polymer solution. The polymer is charged by the electric field and when the field is intense enough, the polymer solution flies out the end onto a collector with the opposite charge. The solvent evaporates and the polymer hardens into a tangled web. The diameter of the threads can be adjusted anywhere from the nanometer to micrometer range [8][9].

This process is easy and simple and the resulting topography is similar to the ECM. It is widely used to engineer scaffolding for tubular tissues, like vascular or urethral, and other tissues [8][9]. 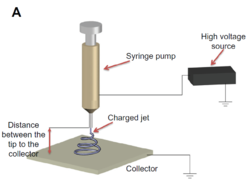 This diagram depicts the process of electrospinning [8] 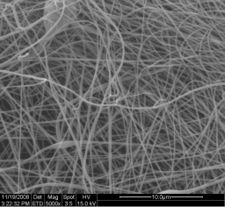 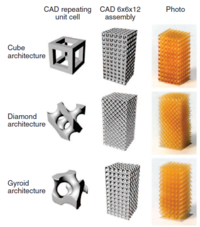 The scaffold is designed in a CAD program and printed using a 3D printer. This process is also called “Additive Manufacturing” since structures created by this process are built layer by layer. This method is relatively quick and cheap in that it greatly reduces the cost of creating a single copy of a particular scaffolding design and the scaffold can be created within a day. A drawback in 3D printing is that it is difficult to deposit material over an empty cavity, so a scaffold for the scaffold is needed. Another is that this process is limited by the number of available biomaterials that can be used to create these scaffolds [3].

A picture of a 285 um long racecar made using a high precision 3D printer. Source: tuwein.ac.at 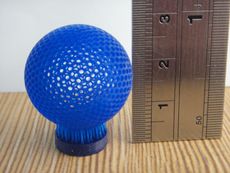 In this process, organs are extracted from animals (sheep, mice, ferrets, etc) and the cells are removed by washing with mild detergents (usually by pumping the solution through the vascular system). This kills and washes away the cells without damaging the extracellular matrix (ECM). The ECM is then reseeded ex vivo with human or animal cells. They repopulate the ECM and create a new, functional organ that can be transplanted. A limitation for this procedure (semi-xenotransplantation) is the lack of scaffolding for solid organs. Animal experiments, such as transplanting functional rat penile tissue, have been successful but this technology is far away from entering clinical studies [12].

Hydrogel is a network of superabsorbent polymer chains immersed in a fluid solution. They can used in combination with cell printing to use as a scaffold for tissue growth. Since hydrogels are not water soluble, they can form a sort of mesh like scaffolding when immersed in solution. They are currently used mostly in connective tissue studies, such as cartilage tissue engineering, since they are more compliant (easier to bend and transfer mechanical forces throughout itself) [3][15]. 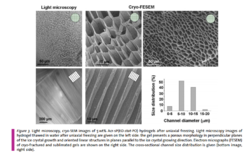 Cell printing is the process where cells are placed onto a substrate. Cell printing is advantageous in that it allows for the cells to be precisely placed onto a surface. This gives greater control over the individual cells and their development in a way that other methods cannot offer. This is especially true in terms of the quantity of cells that are able to be placed at a time using cell printing. An exciting area of research in cell printing is in situ cell printing, or printing different cells directly onto or into a wound. The methods below are several different ways to print cells.

This image depicts a droplet of liquid being propelled from one glass slide to another using laser printing, [17] 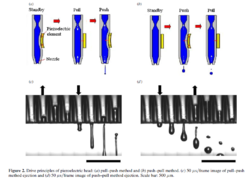 A diagram of the push-pull and pull-push system of an inkjet nozzle [20].

Inkjet printing has been in use since the 1980s, but it wasn't until until about the year 2000 that this technology has been adapted for printing cells. Inkjet printing uses an inkjet printer and replaces the ink for cells suspended in solution, then seeds them onto scaffolds. The actual ink dispensing nozzle uses an electrical current to cause a piezoelectric element to restrict the diameter of the ink nozzle, squirting out the ink. This can be done in either a push-pull or pull-push fashion, shown in the picture to the right. Inkjet printing is cheap and versatile: a cell printer can be made from a commercial inkjet printer and multiple cell types dispensed by multiple ink cartridges. Cells can also be printed on curved or wavy surfaces allowing the cells to be printed in situ.

Inkjet printing suffers from cellular damage and cell death due to the mechanical stresses placed on the cells while being printed. Additionally, the cells tend to clump near the nozzle, resulting in clogging. The shape of the droplets are also relatively hard to control [19].

In this printing method, cells are suspended in a gel, placed in a tube and squeezed out of a nozzle (using a plunger) while being moved around by a robotic arm. This cell printer type is, relatively, not harmful to the cells dispensed, but if the cell density of the effluent is too high, shear stress will cause significant cell death. There are a limited number of biomaterials that are available for extrusion based printing, limiting the number of applications this technique can be used for. Extrusion printing has been used to print a number of tissues, such as vascular tissues [19][21].

In situ Printing and Future Directions

A picture of the skin spray gun. Source: National Geographic

The "skin spray gun" has been designed to treat second degree burns by using skin stem cells from the patient by a biopsy. With this device, hopefully, skin grafting can be replaced. Grafting takes weeks to accomplish, has a much higher risk of infection, leaves much more scarring and is more painful. Currently, the "skin spray gun" is still undergoing clinical trials for the treatment of second degree burns [22][23].

The University of Illinois iGEM team wanted to create an RNA "scaffold" to create an "enzyme conveyor belt" to increase enzyme efficiency.

The University of Missouri iGEM team wanted to use a membrane protein that could be used as a sort of scaffolding in order to bind to other proteins to the cell surface.