What is the iGEM Registry?

The Registry of Standard Biological Parts is a growing bank of genetic building blocks (promoters, DNA binding sites, protein-coding sequences, etc) that are built with the intention of being pieced together to create synthetic systems within organisms. The goal is to create a large functional group of parts (called BioBricks™, categorized by type, so that new combinations can be built according to engineering principles. BioBricks™ are trademarked in order to define and ensure that the standardized parts in the Registry remain free-for-use as part of a standard library or parts.

"Get Some, Give Some"

The registry is built on the idea of "get some, give some:" the Registry is a resource for users to find and integrate new parts into their systems, while they in turn provide the Registry with data regarding the effectiveness of obtained parts and new parts they have developed. In this way, the Registry continually grows and improves as a community resource.

BioBricks™ are created with the intention of being easily joined and manipulated. In order for this to be possible, the BioBrick™ assembly standard requires the use of defined prefix and suffix sequences that contain specific restriction endonuclease sites (EcoRI, XbaI, SpeI, PstI and NotI). Naturally, the parts must also be engineered such that these sites are not present in the functional region of the sequence.[1]

A tutorial on BioBrick™ assembly is available on the BioBricks construction tutorial page. Specific assembly standards for different types of BioBricks can be found at the Help:BioBrick Assembly page.

MIT initially used a unit of measurement called TIPS (Transcription Initiations per Second) for measure rates of transcription at the ends of its parts; however, this was insufficient because there are places on the DNA (e.g. terminators) where transcription initiations are not taking place. PoPS is a relatively new unit developed during construction of standardized "ends" of DNA pieces that measures the inputs and outputs of BioBrick™ parts. PoPS measure the rate at which RNA polymerase moves past a point in the DNA, similar to measuring the current flow across a specific point in a wire. Devices that have an input and output in PoPS are composable - that is, they can be arbitrarily joined together to create complex devices and systems. Creation of devices allows us to characterize devices and eventually more complex systems, thus PoPS is important as a common signal carrier. PoPS differs from transcription rate in that it can also be measured at terminator sites; upstream, they are theoretically equivalent.

An example of a system from which PoPS is understandable is a PoPS based inverter, which takes in a PoPS signal and inverts it. A PoPS based inverter consists of a ribosome-binding site, repressor coding region, terminator and cognate promoter. A high PoPS input cause expression of the repressor, which then binds to the promoter and produces a low output signal. A low PoPS input means very little repressor expression, so the promoter is free to generate PoPS.

At the end of the day PoPS is a useful abstraction that we can use to think about transcription-based logic devices and characterize BioBrick™ parts; up to this point, there has been to way of measuring it in vivo.[3]

The main page of the registry has a welcome message, four main icons, a list of registry tools, and registry news. The areas of interest for the purposes of searching and finding parts and the iGEM competition are the main tabs and registry tools.

This tab opens up the Catalog of parts, devices, and systems for browsing and finding parts.

The help section of the page consists of FAQ's, an introduction to BioBrick standardized parts, instructions for various types of assembly, information about the Registry and its tools, a more in-depth look at designing systems using BioBricks©, information about the DNA Repositories, and help for users and groups.

This icon links to the iGEM competition home page.

This icon opens up the DNA Part Repositories page, which contains a list of (and a convenient search feature for) the DNA for BioBricks available in plasmids in cells.

Opens the search page for parts in the Registry.

Opens the page for adding basic parts, composite parts, and construction intermediates to the Registry.

Opens the page where parts can be requested for use by iGEM teams.

The registry is focused primarily around the Catalog containing sorted and categorized entries. The Catalog is split into a hierarchy of parts, devices, and systems. Parts are the simplest entries in the catalog, basic building blocks for devices and systems. Devices consist of multiple parts pieced together to perform a particular function. Systems, the most complex of the three, are self-contained sequences that entirely specify all the parts encoding a device designed for a specific task.[4]

You can browse the parts and devices in the Catalog by: 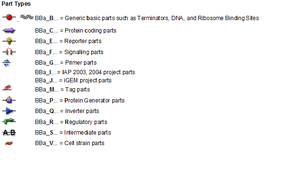 The letters used in naming parts and their corresponding functions.

The names of parts in the Registry begin with BBa = BioBrick [version] alpha, followed by a letter indicating their function. These letters and their corresponding functions are displayed in the image to the right.

An example of a part is BBa_I721001. The easiest way to determine the function of this part is simply to take the name and enter it into the search bar in the top right corner of the page. I attempted searching multiple parts based on their name in the actual search page of the registry, however it could find them. It is possible that this is due to them recently redoing their system, because the part has been in the registry since 2007 in this case. Decoding the name is fairly simple; the first part implies that it is a BioBrick part type alpha (I can't find any examples of beta parts in the system). The I, as shown in the chart to the right, is supposed to signify that it is from an IAP project from 2003 or 2004; however, this is not the case (explained below). The numbers are assigned to groups involved in the project; searching the part will pull up its page with that information. In this case, the part was contributed by Jeffrey Hoffman and his iGEM group from 2007 - this is a clear example of the mentions in the paper by Peccoud [5] that a large percentage of parts in the registry are mislabeled or inaccurate.

The easiest way to find a basic part if you know the part name or number is to enter the information on the search page of the Registry. If you are searching for parts that serve a specific purpose, the quickest way is to browse the parts by type or function in the Catalog. Finding composite parts entails the same process as basic parts; to find composite parts that contain a specific basic part you can use the Superpart search section on the Registry search page.

This information and more can be found in greater detail on the registry's Help:Search page.

Once you've found a part you want to order, there are multiple ways of acquiring it from the registry. Before ordering, you should go to the part's main page on the registry and check if it's available. This information is in a box on the top right of the page, listing the DNA as available if the part can be requested. Once you've checked availability, it can be requested via email. An email should be sent to hq@igem.org containing your iGEM team or lab name, the name of the part, the plasmid backbone and resistance, and the source plate and well. This information and more is on the Registry's site on the Help:Requesting Parts page.

Addgene is a nonprofit organization whose purpose is to create a plasmid repository that will ease sharing of plasmids between scientists. Plasmids can be found in the following categories: empty backbone, species of gene, popular plasmids, depositing scientist, special collections, expression system, consortiums, and vector type. Plasmids can be ordered directly from their website. Several useful tools are available on their website as well, including a sequence analysis program, vector database, and various protocols for operations involving plasmids.