Through recent advances in synthetic biology that allow population level control of stability and dynamics, synthetic biologists are able to reliably control population composition and function. These advances give way to developing more complex ecosystems that can involve multiple microbes growing in consortium. These communities can achieve a variety of functions that may be difficult or impossible for a single microbe to perform on its own. By combining this with new techniques for computation and prediction, optimizing synthetic consortia to provide new methods in the field of bioprocessing, healthcare, and communication are possible.[1]

Synthetic consortia have a number of advantages over a single population that makes it beneficial to engineer new systems. Consortia are capable of more complex functions than are possible in individual populations. They also are more robust to environmental fluctuations such as nutrient depletion, invasion of foreign populations, and evolutionary mutations across generations.[2] It is often difficult or impossible to engineer a single microbe to perform two or more tasks. This can be overcome by compartmentalizing the functions desired in different populations within the same culture. To achieve this the cells must be able to communicate with one another. This can accomplished by trading metabolites, as will be discussed later, or by exchange of dedicated molecular signals otherwise known as quorum sensing. This concept is discussed in detail here.

Major challenges develop when trying to engineer multiple, interacting populations. Among these the most difficult aspect is control of populations over time. With natural, oral bacterial communities, maintaining homeostasis is relatively simple, as members in the population typically do not out compete each other, nor do they exhaust their supply of resources due the relatively constant intake of food.[3][4] For multiple populations that are synthetically designed, this task become increasingly difficult. This is due to the tendency of genetic composition in these organisms to change over time as they adapt to their environments. To overcome this difficulty, the consortia should be designed such that members of the consortium can be re-introduced or eliminated as needed, and more importantly, be monitored over time.

The second challenge facing development of synthetic consortia is that gene transfer, at least in the case of natural microbials, is common. This issue needs to be taken into account to ensure the function of the community is not disrupted due to these changes. Another challenge is the ability to incorporate stable changes into the genomes of microbes that are not currently commonly engineered.

Finally, fine-tuning the performance of multiple populations will be an important barrier to overcome. To do this, techniques used for directed evolution that help optimize the behavior of single populations must be extended to multiple populations. Along with this, high-throughput screening and gene-chip assay procedures need to be improved to further aid in the design and evaluation of synthetic consortia.

Characterizing the behavior of microbes in co-culture is an important endeavor to explore. Wintermute et. al. attempts to create a generalized model of metabolic interaction that can account for metabolites exchanged in the co-culture, as well as the genotypic diversity of the strains involved. [5] Ideally, such a model would not require biochemical characterization for each participant to function properly. To create this model, Wintermute et. al. used optimization-based techniques of flux balance that have been successful in the past to characterize metabolic systems of various species. They extend this approach to higher-order systems that involve a model set of E. coli auxotrophs from the Keio collection. They selected 46 conditionally lethal auxotrophic E. coli. and by pairing them in minimal media, determination of which mutant strains cross-feed to survive is possible. 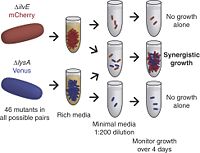 Two strains of yeast that have an essential deletion and are tagged are cultured together to determine synergistic growth. [5]

They term this type of interaction as a synthetic mutualism in trans, or SMIT interaction. They chose their collection based on deletions that block a essential metabolite, which forces a strict dependency on an external supply of that metabolite. The strains were tagged by inserting plasmids expressing either mCherry or Venus fluorescent proteins and co-cultured together in pairs. This created a total of 1035 unique pairs. By using the growth of a given strain, they interpret the strain's relative level of cooperation. They used this data to build a model comparing the efficiencies of various pairs. What they found was that 17% of the pairs displayed synergistic growth as defined by their model. 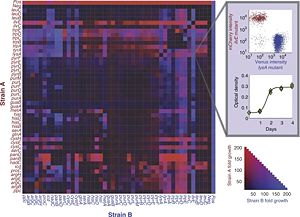 They wanted to be able to predict these results based on an explicit value for the exchanged metabolites. To do this they borrowed a concept from linear programming models called a "shadow price." This price, when applied to SMIT interactions, is a measure of how beneficial to growth the taking up of a metabolite is to the strain, and likewise, how detrimental secreting a metabolite is to growth. These prices are called costs and benefits respectively. By dividing cost from benefit, the efficiency term is created. Using this efficiency, they are able to predict the the growth rate of their system. It should be noted that this efficiency was derived only from stoichiometric considerations, meaning it should be directly applicable to similar systems.

This red and blue heat map shows fold growth of strain A and B respectively. The negative control is grown in sterile media, while the positive control contains a deletion at the pfs locus making it viable in M9 medium.[5]

Shou et. al studies cooperative interaction between two modified Saccharomyces cerevisiae yeast strains.[6] The R<-A strain has been labeled with red-fluorescent protein, but has been altered so that it cannot produce adenine, thus requires adenine from an external source to proliferate. However it does produce lysine. The Y<-L strain is labeled with yellow-fluorescent protein, requires external lysine, and produces adenine. The authors believe that by culturing them together, they will each benefit from the other's metabolic products and termed this type of interaction as cooperation that is synthetic and mutually obligatory or CoSMO. This first approach did not work. The co-culture failed to achieve sustained growth. Next, they just made each strain overproduce its metabolite product. This method seems to have worked. The stains cannot secrete their respective metabolites which means the cell must die before its products can be delivered to the co-strain. This created a time delay between the growth and starvation cycles of the two strains. The Y strain entered the death phase before the R strain which lead to an early favoritism of the R strain, but this constraint did not cause an overall dominance of R. Interestingly, when the co-culture was diluted above the viable cell density and allowed to grow over several cycles, they found that the co-culture was more tolerant of low cell densities than before. They modeled this system effectively and found that by using the supply and consumption requirements of the two strains, they could determine the minimum initial cell-density as well as the minimum cell-number requirements to obtain a viable co-culture. 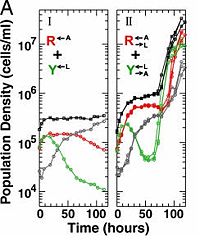 Rational design of CoSMO. The two images compare the system in which the metabolites are produced initially versus the second attempt in which they are over-expressed. [6] 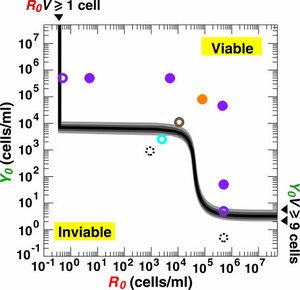 Phase diagram for CoSMO viability. Color indicates the number of viable duplicate cultures, black having zero viable cultures, purple from 1-4, cyan just 1. If the circle is open, the viability was highly variable, if closed, it's 100% viable, if broken, it's 0%. [6]

A more complex form of synthetic cooperation is seen in an example by Tsai et. al where he and his colleagues develop a functional minicellulosome using intracellular complementation to hydrolyze cellulose into ethanol.[7] Past attempts and producing ethanol from cellulosic biomass have been less than effective due to the difficulty of engineering a particular microorganism to perform all the tasks required in the breakdown of cellulose. The authors attempt an alternate solution by breaking up the process, effectively distributing the workload to multiple strains in the same culture. By implementing the method of consolidated bioprocessing (CBP) into Saccharomyces cerevisiae, they found they could obtain yields as high as 93% of the theoretical value. To do this they used three different yeast strains to produce endoglucanase from C. thermocellum, exoglucanase from C. cellulolyticum, and beta-glucosidase from Thermoascus aurantiacus. They attached different dockerins to the three secreted enzymes to keep track of them when they attach to the surface display miniscaffoldin. 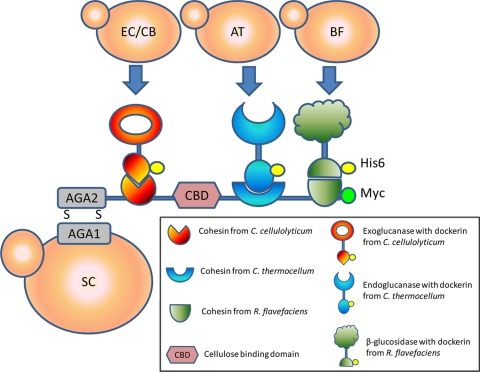 Surface assembly of a functional minicellulosome through intracellular complementation, using a synthetic yeast consortium. The basic design consisted of four different engineered yeast strains capable of either displaying a trifunctional scaffoldin Scaf-ctf (SC) or secreting one of the three corresponding dockerin-tagged enzymes (endoglucanase [AT], exoglucanase [EC/CB], or β-glucosidase [BF]).[7]

By varying the ratio of the four components, they found that SC:AT:CB:BF at 7:2:4:2 created the highest yield, almost twice that of an even ratio. Due to the modular nature of this design and its high level of control, the authors believe this method can be extended to the design of many more cellulosome-based consortiums.

The 2011 Peking University team attempted to develop a logic circuit based on the concept of synthetic consortia, their wiki page is http://2011.igem.org/Team:Peking_S