Quorum sensing (QS) refers to the ability of microbial cells to communicate with one another to determine their densities. This communication is usually facilitated by the production and extracellular export of a small signaling molecule which other bacteria can then detect. The concentration of the small molecule is tied to transcriptional regulation in members of the quorum sensing bacterial population. The more QS bacteria producing the small signaling molecule in a given area, the higher the concentration of that molecule. When the small molecule concentration reaches a certain amount, the bacteria are at 'quorum' and all participating QS bacteria undergo changes in gene expression. In natural environments, this change often involves increases in virulence, biofilm formation, bioluminescence, sporulation, or competence. In synthetic environments, these signals can be used as input for genetic circuits. QS is currently an area of intense research for its implications in human health, microbial ecology, and more recently, synthetic biology.[1] 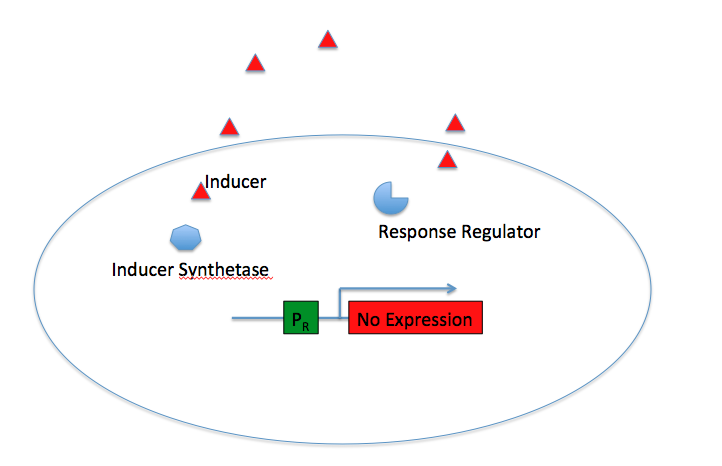 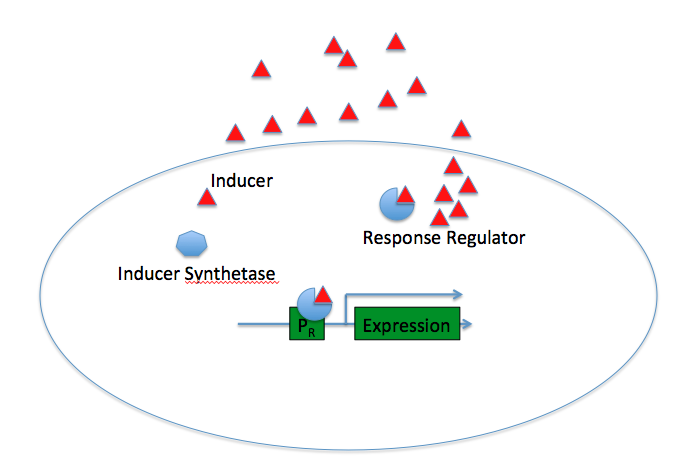 The first characterized QS system, LuxI/R controls the bioluminescent lux CDABE operon in V. fischeri. These bacteria generally inhabit the light organs of various aquatic creatures and upon reaching a high density of 10E11 cell/mL, trigger the generation of luminescence. This is facilitated by a two component system, LuxI and LuxR. LuxI produces a homoserine lactone (HSL) 3-oxo-C6-HSL and LuxR binds the HSL (also referred to as an autoinducer) and facilitates activation of the _lux_ operon. The low basal expression of the HSL by LuxI is not enough by itself to activate cytoplasmic LuxR and the rapid diffusion of the small molecule out of the bacteria ensures that it will not accumulate without input from other cells. When the concentration of bacteria crosses a threshold and the HSL concentration is high enough, the HSL-bound LuxR activates the lux operon and triggers bioluminescence in the bacterial population.

Isolated from P. aeruginosa, this in similar in mechanism to the LuxR/I system with the notable exception of using two concurrent pairs of inducer and receptors. In this system, LasI produces the HSL 3-oxo-C12-HSL and RhlI produces C4-HSL. Like the LuxR/I system, these small molecules diffuse from the bacteria into the environment where they are free to enter other bacteria. The receptor LasR binds 3-oxo-C12-HSL ligand and at a high enough concentration, triggers the expression of various virulence genes as well as rhlR. RhlR is then activated by a sufficient concentration of its ligand, C4-HSL, and allows for expression of other genes important to the bacteria during quorum. What is interesting is that there is also cross talk between the two systems - 3-oxo-C12-HSL also binds to RhlR and inhibits the binding of C4-HSL, likely to ensure the establishment of LasR mediated genes before RhlR mediated genes.[2] 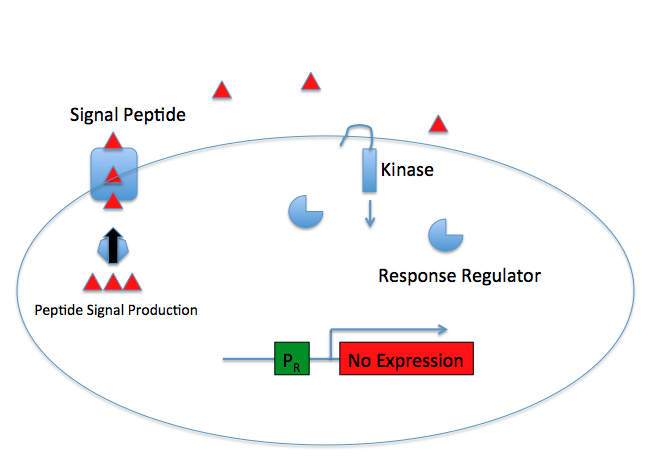 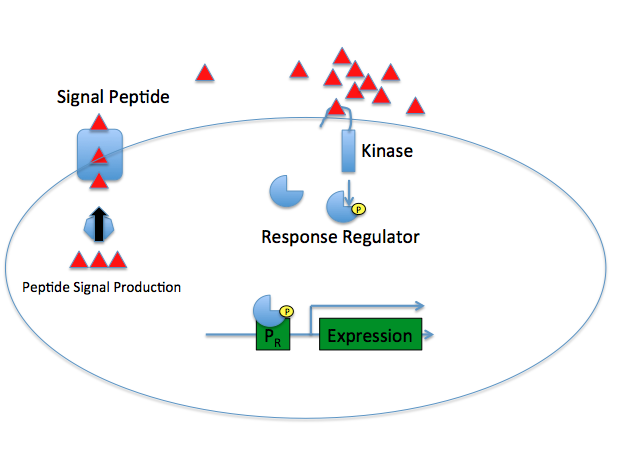 Unlike Gram-negative QS systems, Gram-positive bacteria tend to use small excreted peptides to regulate their quorum responses. A canonical example is the AgrC/AgrA system from S. aureus. In this system, a small 7-9aa peptide called an auto-inducing peptide (AIP) is generated by "argD" and is actively exported from the cell. This signal is then recognized by ArgC, which is a transmembrane receptor histidine kinase. This in turn phosphylates and activates ArgA, which proceeds to regulate the expression the "arg" operon as well as a small RNA transcript RNAIII. RNAIII is the main effector of gene expression in the ArgC/ArgA QS, leading to changes in virulence and biofilm formation.

One of the most straightforward uses of QS in synthetic biology is as biosensors for harmful bacteria. The correlation between the concentration of N-acyl-HSLs (AHLs) and the populations of potentiallly harmful bacteria [3] suggests that synthetic QS systems that can monitor AHL concentration would provide a useful clinical indicator of disease. AHL levels could be combined with out QS inputs in whole-cell biosensors to ensure accurate measurement of disease states. Whole cell biosensors also have applications in the realm of microbial ecology. A study in 2007 used whole cell biosensors to detect various AHLs in a soil environment for studying QS usage in soil bacteria.[4]

The ability to control gene expression in one bacteria from a product produced in a second bacteria is a powerful tool in engineering multicellular systems. Specifically, it allows for a population of identical genetic makeup to have physiological heterogeneity. As QS molecule effect those closer to the producer more than those further away due to diffusion dynamics, spatial aspects can be begun to be considered in engineered populations. A well known example of this is the synthetic edge detection program. The construct uses the LuxR/I system to determine if the bacteria is in the light and next to a bacteria in the dark. The bacteria in the dark produce LuxI, which in turn produces the inducer molecule that diffuses out of the cell. The dark also triggers the repression of LuxR response elements tied to pigment formation. A bacteria has to be receiving the signal from a dark dwelling bacteria while not being in the dark itself to produce a pigment, thus allowing only bacteria on the edge of light and dark to produce pigment.[5]

In addition to creating heterogenous physiology from a homologous genetic makeup, QS can be used to define relationships between different bacteria. This can be used to ensure that two different populations are present at certain levels to elicit a 'microbial consortia consensus [6], auto-regulate cell concentration [7], and has been even used to model ecological interactions (such as predator and prey) in E. coli.[8] These developments are of particular importance to the future of synthetic biology because it allows one to start addressing much more complex problems, such as tissue engineering or multi-stage product synthesis [9]. Using multiple different strains to produce a complex product has many potential benefits, as it would decrease the metabolic strain on a particular bacterium by lowering the number of different proteins it needs to express and possibly decreasing the buildup of numerous toxic intermediates common in many metabolic engineering projects. What multicellular communication does for synthetic biology is to mandate coexistence and cooperation between multiple strains such that a specific heterogeneity can be maintained in coculture. Otherwise, it is much harder to control the relative number of different populations, disrupting any carefully crafted stoichiometry between them.

//Applications of quorum sensing in biotechnology.