In prokaryotes, a key example of specificity factors is the σ subunit in bacterial RNA polymerase. For housekeeping genes, the σ70 subunit recognizes its specific -35 and -10 sequences in the promotor. However, in response to heat stress, the σ32 subunit replaces the σ70 subunit, and recognizes entirely different promotors. This enables certain gene products to only be expressed when the bacteria is under heat stress.

In eukaryotes, general transcription factors (GTFs) such as the TATA-binding protein (TBP) are examples of specificity factors. 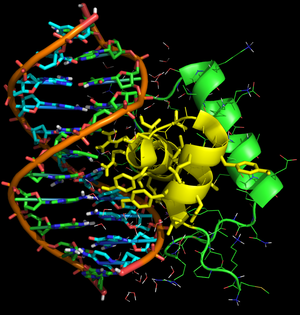 The difference between repressible and inducible operons lies in the role of the effector, or molecular signal that causes a conformational change in the repressor. The effector can be either a corepressor or inducer.

If transcription is normally off but can be induced by the binding of an inducer to the normally active repressor, the operon is referred to as an inducible operon. In this way, the repressor itself is "repressed", and transcription increased. Inducible operons are often used in catabolic pathways, because the enzymes involved in catabolism do not need to be synthesized unless their substrates are present. The lac operon is an example of an inducible operon, with allolactose as the inducer.

In contrast to repressors, activators typically lie to the 5' end of an operon's promotor (in eukaryotes, they can be quite distant to the promoter, in which case they are termed enhancers.) They facilitate RNA polymerase binding to the promotor, increasing the rate of expression. As such, they are an example of positive gene regulators.

Like repressors, activators can either be normally inactive (relying on a coactivator to become active) or active, but either way the activator is considered a positive regulator.

The expression of ara and lac follows the "all-or-none" pattern. That is, when inducer is present in nonsaturating amounts, some cells are completely induced and others remain completely repressed. If you look at a population of cells at a time, the rate of induction will appear to be linear, but this is a deceptive artifact of averaging.

This pattern is a consequence of the genes for importing inducers being a part of the operon itself. A cell may uptake an inducer, and then that inducer makes the cell drastically more likely to uptake more of the inducer; this forms a positive feedback loop and any cell induced in this manner will reduce the amount of inducers available to other cells.

Often, this doesn't matter, because addition of a saturating amount of inducer will ensure virtually all cells will be induced. However, if the inducer is toxic in high concentrations--as is the case with IPTG--all-or-none becomes an issue.[2]

More information can be found here. 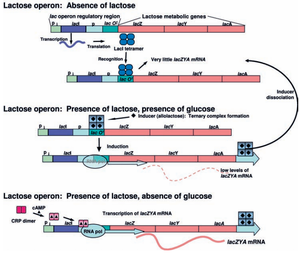 Ideally, the enzymes necessary for lactose catabolism should only be synthesized when lactose is present (because otherwise, energy is wasted in unnecessary enzyme synthesis) and when glucose concentration is low (because glucose is preferentially metabolized over lactose).

To accomplish this, the lac operon makes use of both positive and negative regulation. By using both activators and repressors, transcription of the lac operon is dependent on two variables: [cAMP] (indicative of low glucose concentration) and [allolactose] (an isomer of lactose). The more variables handled, the more specifically tailored a response can be.

The lac repressor itself, LacI, is subject to constitutive regulation, as it is not part of the lac operon.[3] If LacI is not present, the lac's promoter is constitutively on.

The ara operon is analogous to lac. Where lac has the structural genes lacZYA, ara has araBAD, which code for enzymes that catabolize arabinose into D-xylulose-5-phosphate. The initiator region, araI, consists of a promoter and operator, to which the inducible activator coded by araC binds. The coactivator is arabinose (analogous to allolactose). If araC is missing (perhaps due to mutation), the ara promoter is constitutively off; this is in direct contrast to the lac operon. This difference is significant because it confers differential susceptibility to mutation.

Just as E. coli maximizes efficiency by only synthesizing the enzymes for lactose catabolism if both lactose is present and [glucose] is low, it also only expresses the enzymes for arabinose catabolism if arabinose is present and [glucose] is low. Unlike the lac operon, which achieves this via dual positive and negative regulation, the ara operon makes use of dual positive regulation (two activators). The activators in this case are CRP bound by the coactivator cAMP (identical to the lac activator), as well as AraC bound by the coactivator arabinose[4] 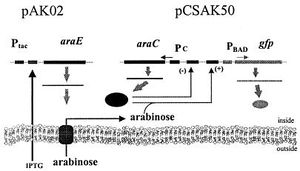 Decoupling of the araE transporter from the inducer removes the all-or-nothing effect.[2]

Khlebnikov et al. switched control of the araE transporter from being arabinose-induced to IPTG-induced. This decoupling removed the all-or-nothing effect, because the transporter was no longer part of the ara operon.[2]

The repressors of gal (galactose metabolism) and mgl (methylgalactoside, glucose, and galactose transport), GalR and GalS (Gal repressor and isorepressor, respectively), act by dimerizing and creating a loop in the DNA, repressing the promoter galP1. GalR binds strongly to the external operator (OE) of galP and weakly to mgl's OE; the reverse is true for GalS. While gal is strongly repressed by GalR, it is weakly repressed by GalS[5]

While galR is constitutively expressed, expression of galS is dependent on CRP much like the lac and ara operons.[6]

Other ways to control expression

Tet-On and Tet-Off systems can be used to control transcription of a gene of interest. "On" and "off" refers to whether a gene is induced by the presence ("on") or absence ("off") of doxycycline, an analogue of tetracycline.

In a Tet-Off system, the tetracycline repressor, TetR, is fused to an activation domain (VP16), which then binds to a 'tet'O operator, activating transcription. If doxycycline is present, this fused protein (tTA--tetracycline transactivator) will bind doxycycline, which causes a conformational change and prevents it from binding to the operator.

Tet-On systems, on the other hand, are only activated if doxycycline is present, because binding doxycycline allows tTA to bind the operator.

The ACE1 (activating copper-metallothionein expression) transcription-binding factor activates transcription at high [Cu2+] due to conformational change. The gene of interest must be downstream of a chimeric promoter that is a linkage of the CaMV 35S RNA promoter and the ACE1 transcription factor-binding site from yeast.[7]

The regulator XylS causes increased transcription, so it is a positive regulator (in contrast to the negative regulator LacI). Addition of m-toluic acid induces XylS dimerization, which increases the affinity for the Pm operator.[8]

The prpBCDE operon codes for the catabolism of propionate. Like lac and ara, it requires cAMP-bound CBP to rise above the basal rate of expression.

The main advantage of a propionate-inducible expression system as a synthetic biological tool is the fact that it does not adhere to the "all-or-none" induction model. This is due to the inducer's ability to freely diffuse across the membrane, in contrast to the transporter requirement of lac and ara. So, regulation of gene expression can occur at the cellular level instead of at the cell population level.[9]

The parts necessary for an example inducible promoter to work.[10]

When assembling a system that will result in gene expression, it is often a good idea to use an inducible rather than constitutive promoter so that gene expression is regulatable (e.g., one might only want gene expression after a population of cells is established so that they are not placed under premature energetic burden).[10]

Two other methods of transcription regulation via proteins include DNA methylation and histone modification.

The nitrogenous bases (especially cytosine) in DNA can be methylated, affecting the rate of transcription. Methylation usually results in negative regulation, but it can alternatively result in positive regulation.

Methylation is a critical part of cell differentiation.

Histone acetyltransferases (HATs) catalyze the addition of acetyl groups to histone tails, causing a looser chromatin structure. This is due to the neutralization of positive charges that hold neighboring nucleosomes together. This causes the DNA to be more accessible to RNA polymerase, so it is a form of positive regulation. Conversely, histone deacetylases (HDACs) revert the histone tails to their deacetylated form, bringing neighboring nucleosomes together and making the region transcriptionally inactive.

Histone tails can also be modified by methylation or phosphorylation.