This page contains information about models for simulation and analysis of biomolecular breadboard circuits. Additional information can be found in the following conference paper:

The TX-TL toolbox for MATLAB is a set of MATLAB functions that are designed to simplify the modeling of circuits used in the TX-TL cell free expression system. The source code for the toolbox is available via SourceForge.

This example shows constitutive expression of the destabilized enhanced Green Fluorescent Protein (deGFP) from a gene on a plasmid. 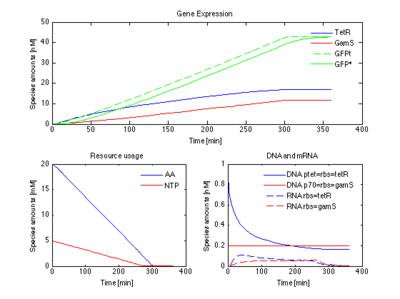 Creat a new tube that will contain the DNA to be expressed, and name it 'circuit'.

Use txtl_add_dna to add custom deGFP DNA to tube3, under control of a constitutive p70 promoter:

The numbers in brackets are the lengths of the respective regions in number of base pairs (BP). These are used to calculate reaction rates for transcription, translation and degradation. The number 4.0 specifies that the initial concentration of the DNA (in nM) in the experiment once all the tubes have been combined. The last input argument species that the DNA is placed on a plasmid, and thus is not susceptible to exonuclease action.

Combine the tubes containing the extract, buffer and circuit into a final tube (referred to as Mobj) in a fixed ratio defined in the experimental protocol.

Define simulation time and set the 'StopTime' property of the simulation:

Every model (tube) has an associated 'configuration set object' used to define how the model is to be simulated, and we can set its proterties as above. Simulate the model:

This simulates the model object using the associated configuration set, and returns the time evolution of the concentration of the species in the model. Produce a standard plot:

The TXTL toolbox uses a set of standard names for molecular species and compounds. If new components are added to the system, they must follow these naming conventions.

In order to allow automatic processing of reactions, the DNA, mRNA and proteins associated with a given gene have specific naming conventions:

The domain names for promoter (prom), untranslated region (utr), and gene can be arbitrary strings, but should generally consist of letters and numbers. DNA domains is specified as "dom1(len1)-dom2(len2)-..." where dom1 is a valid variable name and "(len1)" is an optional construct defining the length of the domain (in nucleotides). If length is not specified, then default value is used.

A number of species are defined by the TXTL library and used to implement core processes:

As part of the reactions that are set up by the toolbox, a number of standard species are created:

In addition to the TX-TL toolbox, several additional models have been developed for individual breadboard projects.

For linear DNA, GamS can be used to reduce the rate of degradation of DNA and increase the expression level (see preliminary data for more information). The figure below shows the results of a preliminary model that we are developing to capture the affects of gamS.