A computer simulation concerning initial events in the sperm/DNA interaction was performed. DNA binding with MHCII and CD4 proteins, DNA internalization into spermatozoa, and DNase activity in sperm were described by first order differential equations (ODE). The dynamics of the system depended on the parameters of the model. The simulation could explain controversial results in sperm mediated gene transfer research and posed this phenomenon to an unknown form of biological evolution.

The phenomenon of foreign gene transfer with sperm was first observed in lab conditions in 1971 [1]. Since 1989 [2, 3], when sperm mediated gene transfer (SMGT) was rediscovered, some unusual molecular mechanisms in spermatozoa were described, such as the ability of sperm cells to capture exogenous DNA [4] and RNA [5] molecules, the reverse transcriptase activity in sperm cells [6], the insertion of foreign nucleic acids into sperm chromatin [7] and an apoptosis-like response to the high concentration of internalized DNA [8]. SMGT has been seen as a mechanism for genome destabilization [9].

Molecular mechanisms of sperm/DNA interaction are partly known (Fig. 1a). Originally, glycoprotein Inhibitor Factor I (IF-1) competes for DNA binding sites on a sperm surface and prevents DNA interaction with sperm cells [10]. In the absence of seminal fluid that contains IF-1 protein and nucleases [11], foreign DNA binds strongly (Kd=7×10-15 M) to major histocompatibility complex class II molecules (MHCII), which are exposed on the sperm membrane [12]. DNA interaction with CD4 receptor leads to internalization of the protein/DNA complex into sperm cells [13], where DNA can be attacked by internal nucleases [6]. When foreign DNA penetrates into a sperm nucleus [14] it can attain an episomal form [15] or may be inserted into the sperm chromatin [8]. Fate of foreign DNA during embryogenesis and its transfer into progeny are of great interest, but this is not a subject of this report. Here, I suggest an initial sperm/DNA interaction scenario that might partially explain the controversial results of SMGT efficiency, which varied in some experiments from 0 to more than 85% [16]. In this work the dynamics of sperm/DNA interaction was investigated by computer simulation.

The structural model of sperm/DNA interaction (Fig. 1a) was used to describe the problem. I assumed free foreign DNA, complexes of DNA with MHCII and CD4 proteins, DNA compartmentalization in the sperm cell, DNase activities in the seminal fluid and in the spermatozoon. The DNA flow between nodes, which are represented on the graph in Fig. 1b, was described by the first order differential equations:

I put some assumptions, based on experimental data, into the SMGT1 model, such as: 1) DNA binds to MHCII and CD4 molecules, 2) the CD4 receptor takes part in the DNA internalization into sperm cells, 3) IF-1 prevents DNA binding to MHCII and CD4, 4) there are DNase activities inside and outside sperm cells. I speculated about an interaction between MHCII and CD4 molecules and about the release of a part of the DNA from spermatozoa by CD4 recycling (Fig. 1a). However, the model of foreign DNA stream in spermatozoa (Fig. 1b) was in good agreement with experiments for sperm/DNA interaction [4, 13].

The modeling described some stages of DNA penetration into a sperm cell: delay phase, DNA internalization, plateau, and decrease of internal DNA content (Fig. 2). Denote, lag-period, introduction of foreign DNA in spermatozoa, saturation phase, and stage of DNA degradation were described in real experiments with washed sperm cells from different species [18]. I obtained the fast MHCII/DNA interaction by simulation, because the high value of k1 = 1 was used, which corresponded to a strong chemical binding. The same kinetic was found for human sperm cells [19]. In addition, the fine dynamics of DNA distribution between the participants–MHCII and CD4 proteins–in the course of sperm/DNA interaction was shown (Fig. 2a and 4ac). This hidden mechanism was not revealed in biochemical investigations. Related data were achieved when sperm cells from MHCII or CD4 knockout mice were used [13]. Thus, the simulation had a cognitive power.

Modeling with DNase activities demonstrated their significance in SMGT. The simulation showed that DNases in seminal fluid did not fully prevent the penetration of foreign DNA into spermatozoa (Fig. 2b). According to the model, the IF-1 protection leads to a significant decline of foreign DNA in sperm cells (Fig. 4c), which correlates with the particular inhibitor effect of IF-1 on CD4/DNA binding [10]. I achieved a total suppression of sperm/DNA interaction in the case of both IF-1 presence and DNase activity in the seminal fluid (Fig. 5a). In addition, the internal DNase activities evoked degradation of captured DNA (Fig. 3). Similar results were obtained in experiments with rabbit and bovine sperm, where DNase activity in cells was regulated by temperature [19]. The role of DNase activity in an apoptosis of sperm cells and in SMGT has been discussed [6, 20].

Artificial elimination of components from SP/DNA transport pathway in the virtual knockout experiments (Fig. 4) demonstrated the sufficient role of MHCII molecules in sperm/DNA interaction, as well as the participation of CD4 receptors in the internalization of DNA into spermatozoa. Surprisingly, the disconnection of MHCII and CD4 proteins (k2 = 0) had a more significant effect on DNA internalization than simple MHCII block (k1 = 0); the amounts of DNA in sperm cells at steady states were 0.08 and 0.33 respectively (compare Fig. 4 b and a, red line). Broad variation in the content of MHCII on the mouse sperm surface was described by some authors and its role in SMGT was emphasized by Wu and coworkers [12]. The particular mechanism of DNA incorporation into mouse sperm cells with participation of MHCII and CD4 proteins was investigated by C.Spadafora’s team [13]. The mathematical model (1) described both phenomena.

In this work, I have used the system of first order linear ordinary differential equations–ODE model (1) that demonstrated the realistic behavior. Natural phenomena were described by variations on parameters in the model. However, the last experimental findings showed a complex network mechanism in foreign DNA processing by sperm cells [7, 21], some steps of which could be highly nonlinear and could lead to a more sophisticated behavior. I supposed the equilibrium state, which corresponds to sperm/DNA block, is a special case that might easily be disturbed and have unusual consequences. A large set of variations for parameters in the SMGT1 model caused ‘leaky’ states, where a part of exogenous DNA could penetrate sperm cells (Fig. 5b). These events could have taken place in nature and might have led to the foreign DNA penetration into spermatozoa. The percolation of reporter DNAs into ‘competent’ sperm cells was shown on the mussel Mitilus galloprovincialis [22, 23]. This kind of lateral gene transfer could be one of mechanisms for a compositional evolution of Eukaryotes [24]. 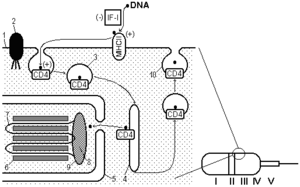 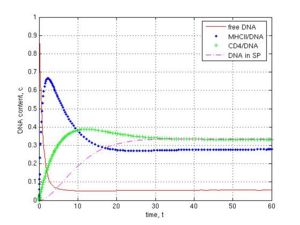 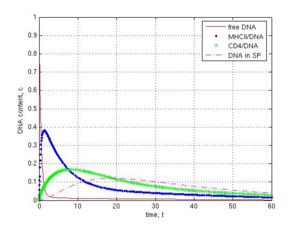 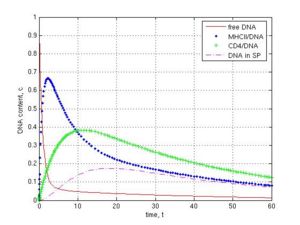 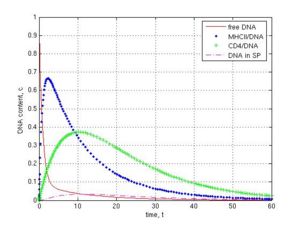 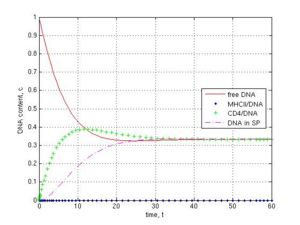 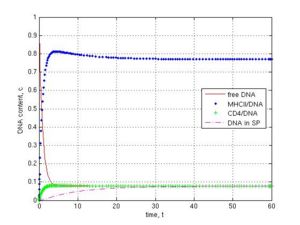 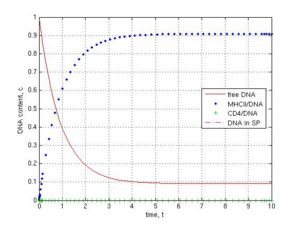 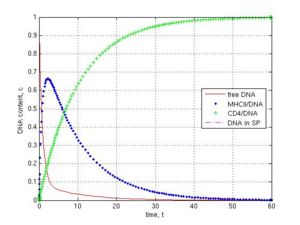 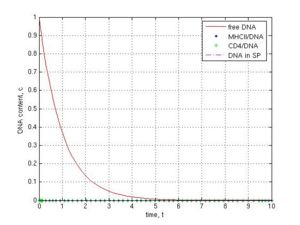 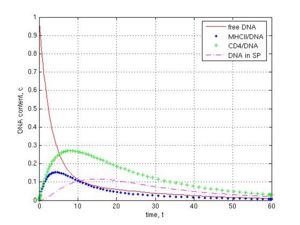 The author is grateful to Irina Shchit and Anastasia Grigorenko for helpful discussions. This work was performed at the Physical and Biological Departments of the University of Freiburg, Germany.

See the full text OWW, pdf and the presentation pdf