New to IGEM Amy is in her second year at BYU majoring in Microbiology. She has been a member of the BABEL lab in the Engineering Department at BYU for two years looking into a cadeveric mechanical model of the lumbar spine. 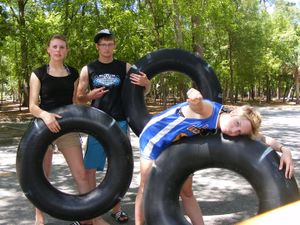 Fun with friends in FL!!

Audrey is a scientist!! 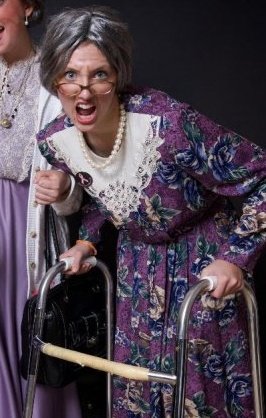 Pretty much this is me now, and maybe in a few years!!

Eric Jones is a mathematics major planning to apply to medical school this summer. Eric is married to Hannah Hinkson. They have been happily and beautifully married since May 2010.

Floating boats down the river

Jeffrey is a Senior at Brigham Young University graduating in Molecular Biology. He is applying to Medical School this summer hoping to stay somewhere out west. (Though he will go wherever he is accepted.) This is his first year with IGEM, but has been working in an Osteoarthritis lab for the past two years under the direction of Dr. David Kooyman. He is working in the E. Colinoscopy group and more specifically on detecting lactate in colon cancer cells. Jeffrey was married Feb 19, 2011 in the LDS Manti Temple and loves being married. In his extra time, Jeffrey loves to play sports, specifically soccer and basketball, reading, mountain biking, and anything that is active and outdoors. 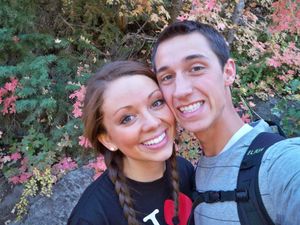 Hillary is studying Microbial Genetics and Biotechnology at Brigham Young University! She is a Junior from Boise, Idaho and loves people, places and things! She has decided to join the 2012 iGEM team and try to find genetically synthesize an early detection system for colon cancer! :) 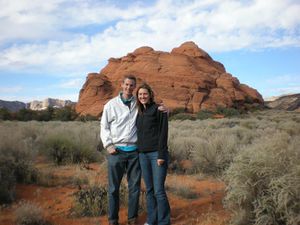 John and Allison in St. George

John Shumway is in his last year at Brigham Young University. He is new to iGEM and is bringing his experience in mathematical modeling and computer programming to the group. John is a piano performance major, planning to give his senior recital in the Fall and graduate in December. In addition to iGEM he does research with a group in the physics department studying carbon nanowires and also with a group in the math department studying Glioblastoma Multiforme. John plans on going to medical school and is going to begin the application process in June, 2012. John enjoys snowboarding, accompanying and singing in BYU men's chorus, running and volunteering at the local hospital.

John is married to Allison Orgill Shumway and they were married on April 27, 2012, in the LDS Mt. Timpanogos temple.

Joseph is a student of microbiology attending Brigham Young University. He is interested in synthetic biology, and has enjoyed the opportunity to more fully explore this field through the IGEM program. He was raised in North Yorkshire, England, and loves the outdoors, literature and sports. He enjoys spending time with his large family of 13 when he gets the chance to visit them, and hopes to be able to go back and visit England. He plans to continue with his higher education after his BS, completing a Masters and Ph.D degree.

Julie Roberts is currently in her senior year at Brigham Young University. Julie is returning IGEM member and is excited to see what the new team can do. IGEM was Julie's first experience working in a lab and has opened the door for her to do more research. Along with IGEM she also works in Dr. Steve Johnson's lab studying nucleosome positioning and gene expression. Julie plans on pursuing an advanced degree in bioengineering or molecular biology. In her free time, when not studying bacteria or green fluorescing worms, Julie enjoys running, dancing, and lip syncing (occasionally singing when no one else can hear).

Justin is a microbiology major at Brigham Young University. He plans on going on to dental school after graduation from BYU. 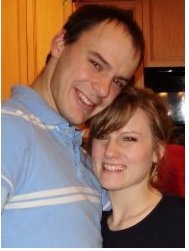 Karl is interested in understanding the processes of the mitochondria and their effects on aging. He is studying Microbiology and hopes to see the day when aging and disease are stories of an ancient culture. He is also interested in geology, psychology, history, and philosophy. He currently lives in Provo, Utah with his wonderful wife Maddie.

Kellie Hecht is a senior at Brigham Young University from Muskegon, Michigan. In December, she will be graduating with a B.S. in Molecular Biology and a minor in Chemistry.This is her first year in iGEM and she is excited to do save the world through one transgenic E. coli at a time. In addition to iGEM, she also works as a research assistant for Dr. Steven M. Johnson, studying nucleosome positioning in different tissue types and developmental stages of C. elegans. In addition to laboratory pursuits, Kellie is in the process of training for a marathon this June, enjoys ballroom dancing, and making music. Also, Kellie is engaged to be married to Timothy Hecht on June 15, 2012 in the LDS Draper Temple.

Kyle is a senior at Brigham Young University, majoring in microbiology. He has lived all over the United States with his parents currently residing in Idaho. Kyle's first research experience was in Phage Hunters where he isolated and purified a mycobacterium phage named Anubis. He also did a research internship in Augusta, GA studying regulatory T-cell populations in a double transgenic mouse model. Apart from doing research, Kyle likes to read science fiction and fantasy books and playing volleyball.

Yuri is a Genetics and Biotechnology and French double major at BYU, with a minor in Ballroom. He's originally from Chile, but he and his family have lived in the us for almost 10 years now. His current goal is to go to medical school after graduating from BYU. He is a first year member of the BYU iGEM Team. He also enjoys watching sunsets and long walks on the beach.