In this experiment you will perform a number of crosses to illustrate important genetic concepts. Recessive X-linked mutations are expressed differently in males versus females (or in the case of C. elegans, in males vs. hermaphrodites). WHY? Think about hemizygosity. In the case of C. elegans, when a hermaphrodite is mated with N2 (wild type) males, the male progeny receive their single X chromosome from the maternal parent. If the X chromosome carries a mutation, all male progeny will express the parental mutant phenotype, while the crossprogeny hermaphrodites will be phenotypically wild type. Recessive autosomal mutations, on the other hand, are not expressed in any of the F1 progeny. Why not?

To test these concepts, you will cross wild-type males with three different dumpy and uncoordinated strains (Dpy Unc). The Dpy and Unc mutations are autosomal and linked in one strain, autosomal and unlinked in another strain, and in the third strain, one of the mutations is autosomal and the other is X-linked. Your task is to sort these strains out, which will be accomplished by making a series of double heterozygotes and examining the progeny from the heterozygotes (self-progeny). Consult the Tools and Techniques section for instructions about setting up crosses before proceeding.

To Do in Lab Today (per group):

You will end up with three crosses of N2 (wild-type) males with different mutants (refer to the introductory comments on crossing) - remember that it is essential that the ONLY N2 animals on the cross plates are males.

To Do Outside of Lab on the 3rd day

In this exercise, you will progress through the normal sequence of events in forward (classical) genetics. You will first perform a mutant hunt, scanning a plate for rare mutants that occur among the background of wild-type animals. You will then pick your mutants to a separate plate, confirm their mutant phenotype, and begin genetic analyses that culminate with mapping the mutation. In truth, mutants will have been secreted on the plate by your devious instructor. Thus, while rare, they will be more frequently encountered than had you sifted through the second-generation progeny from mutagenized worms (as is the case with a real mutant hunt).

Once you have recovered your mutant and confirmed its phenotype (by examining its progeny) you will next perform two tasks in parallel. One of these is to backcross the mutation into wild type. This consists of crossing your mutant times wild type and recovering homozygous mutants in the F2 generation. Backcrossing is necessary to eliminate any secondary mutations that might modify the phenotypes you are studying. This is important because most mutant hunts employ heavily mutagenized P0’s. Backcrossing will also reveal X-linked mutations, as you recall from the previous exercise.

The second parallel task is linkage testing; you will determine on which of the five autosomes (linkage groups) your mutation is located. This task is a prerequisite to mapping. It is accomplished by determining the segregation behavior of your unmapped mutation relative to standard reference markers (e.g., mutations whose location is already known). Recall that unlinked mutations will segregate independently (your basic dihybrid inheritance as first observed by Gregor Mendel) whereas linked mutations will not.

In practice, linkage tests are performed using the following steps (where "d" (dpy) represents your recessive mutant tested with reference marker "u" (unc)). The markers d and u must be distinguishable. Since homozygous mutant males usually will not mate, the desired double heterozygote is constructed by mating males heterozygous for your dpy mutation but wild type for all other genes including the reference mutation (d/+;+/+) with hermaphrodites homozygous for the reference mutation unc(+/+; u/u). The genotypes of the F1 hybrids will be (+/d;u/+) and (+/+;u/+). We are only interested in the double heterozygote (+/d;u/+). The F1 hybrids containing only u are not useful. To select the (+/d;u/+) heterozygotes, we let 4 to 5 individual F1's self fertilize on their own individual plates (one on each plate). We score the progeny of the F1 individuals (the F2) for linkage. Only F1 worms which produce d/d homozygotes are scored, since those are the (+/d;u/+). This should be 50% of the plates. 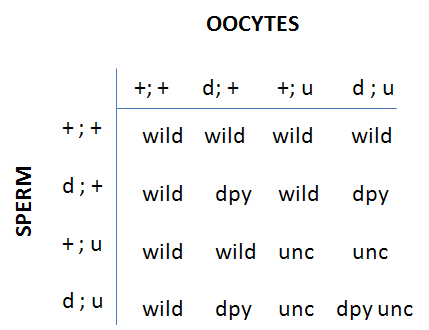 On the other hand, if the markers are closely linked double homozygotes (d u/d u) would occur only through a recombination event. Such an event might occur in either the sperm or the occyte. If the probability of a recombination event is p, and if the event produces wild-type and double mutant recombinant chromosomes, then the probability of getting the double mutant chromosome in an individual gamete is p/2. The chance of an individual gamete which is a (d u) recombinant combining with another (d u) recombinant is (p/2) x (p/2). If the map distance between 2 mutations is 10%, then the probability (P) of recombination occurring is p = 0.1. p/2 is 0.05 and (p/2) x (p/2) is 0.0025. Consequently only about 2 - 3 worms in a thousand will be double mutants if the genes were 10MU apart. That is significantly lower than the 63/1000 one would expect if the genes were not linked (1/16 of the progeny). Therefore, the test for linkage is usually the virtual if not complete absence of the double mutant class (d u/d u). You will use this first assesment to determine which chromosome dpy mutation is on (the chromosome location of each of the unc mutations is known).

Once you determined in which chromosome your dpy and unc are (they should be on the same chromosome), we will perform a two factor cross, which in C. elegans requires that we first construct a double mutant (du/du). As discussed above, the appearance of a double mutant in the F2 requires the union of 2 recombinant gametes -- a very rare event. It is unlikely therefore that we'll find a double among the F2 progeny if the mutants are linked. The probability of a recombination event having occurred on one of the two homologues is much better; that is, there will be many more progeny that are genotypically du/+u than du/du. It would exhibit the reference mutation's phenotype and would segregate double mutants (d u/d u) as one quarter of its progeny. To find a double mutant for mapping, we choose ten individuals of the unc phenotype from the F2 linkage testing plate to self fertilize and look for the segregation of the du/du double mutant among their progeny.

To map, one crosses a homozygous double mutant hermaphrodite (d u/du) with wild type males. The heterozygous F1 hermaphrodites self fertilize and the number of F2 individuals of each different phenotype are then counted. As discussed above, four phenotypes will be observed: wild type, dpy, unc, and dpy unc. The map distance can be calculated any number of ways. You will determine map distances using the formula: RF (recombinant frequency) =the number of single mutants (either dpy or unc single mutants totals) divided by the total number of worms counted * 100 (to obtain it in % recombinants and thus in map units).

To Do Today (per group)