Although many of the aspects of gene function that have been studied extensively in prokaryotes pertain also to eukaryotes, prokaryotic cells cannot be used to investigate some questions specific to the biology of more derived organisms: chromosome structure and the development of a complex anatomy are key examples. The small, free-living soil nematode Caenorhabditis elegans is a convenient model system in which to approach basic questions concerning the genetic control of development and behavior in multicellular organisms. This animal's short life cycle is advantageous for genetic study, and, at the same time, it is small enough to allow complete anatomical studies at the ultrastructural level. C. elegans is easily and inexpensively grown in the laboratory in liquid medium or on the surface of agar-filled petri dishes, where it feeds on bacteria such as the genetically malleable species Escherichia coli (E. coli). Although C. elegans exibits most major types of differentiated tissues (nerve, muscle, hypodermis, intestine, and gonad), each adult worm contains only 959 somatic cells.

Adult C. elegans worms are about 1 millimeter in length, with a tubular body consisting of a hypodermal wall and an underlying musculature that encloses the digestive and reproductive organs. The hypodermal body wall is covered by an external cuticle composed, primarily, of modified forms of collagen. The body cavity (or pseudocoelom) is maintained at a high hydrostatic pressure relative to the outside. This pressure on the elastic cuticle gives the animal rigidity and structural integrity. The hypodermis consists of four longitudinal ridges (dorsal, ventral, left and right lateral) joined circumferentially by thin sheets of cytoplasm, which separate the muscle cells from the cuticle. The hypodermal cells secrete cuticular components and display a periodic activity associated with molting. The body muscles are organized into four longitudinal rows of 24 cells each, located between the hypodermal ridges. When the animal moves, the two subventral muscle strips are coordinated together, as are the two subdorsal strips, producing a sinusoidal wave motion in the dorsal-ventral plane. The alimentary canal includes a muscular pharynx, which takes up food (bacteria), grinds it, and pumps it into the intestine. The intestine consists of 30 to 34 cells; it is lined with microvilli leading to an anal sphincter valve that is operated by a pair of muscles.

The nervous system of C. elegans consists of approximately 300 neurons, including a circumpharyngeal nerve ring, dorsal and ventral nerve cords, and a variety of sensory receptors and ganglia. About 70% of the neurons are located in the head. Sense organs (sensilla) are arranged in two concentric rings around the mouth and include both chemoreceptors and mechanoreceptors. C. elegans exhibits chemotaxis to a number of compounds. It also responds to a tap on the head by moving backwards, and then by turning to move forward.

Embryonic Development The development of C. elegans is known in great detail because this tiny organism (1 mm in length) is transparent and the developmental pattern of all 959 of its somatic cells has been traced. C. elegans generally reproduces as a self-fertilizing hermaphrodite, with each animal producing BOTH sperm and eggs. Two reflexed gonadal arms (each of which contains an ovary, oviduct, spermatheca, and uterus) terminate at the vulva, located midway along the ventral side. The mature hermaphrodite is effectively a female because the gonad has first made and stored sperm before turning to the production of oocytes. Eggs (developing embryos) are fertilized by endogenous sperm and then undergo some development inside the parental hermaphrodite. Embryos are arranged along the uterus with the most developed ones found nearest the vulva. Fertilized eggs are covered with a chitinous shell and, when mature enough, are deposited on the agar surface. Embryogenesis occurs in about 12 hours.
Post-Embryonic Development It is important that you develop some ability to stage animals (that is; recognize the various developmental stages). This is most easily accomplished by simply viewing a mixed population, so that you can directly compare the sizes of the various developmental stages. A newly hatched animal resembles an adult in general proportions and body movement, but is only about one-sixth the length of an adult. During growth, developing larvae undergo four molts in which the old cuticle is shed and replaced by a new underlying cuticle. The inter-molt stages are designated L1 through L4, followed by adulthood. L3 and L4 hermaphrodites can be distinguished from adults via the presence of half-moon shaped structure in the area of the vulva. Worms stop pharyngeal pumping and become lethargic while molting. During growth at 20°C, molting occurs at approximately 14, 22, 30, and 40 hours after hatching, with egg laying commencing at about 50 hours. During larval development, the number of non-gonadal cells increases from about 550 in the newly hatched L1 to about 810 in the mature hermaphrodite and to about 970 in the mature male. At hatching the L1 has only 4 gonadal cells. These cells proliferate to form the adult reproductive system of approximately 2500 nuclei.

In summary, development from external egg deposit to the adult stage occurs in 2.5 days, and the worm's life span is 2-3 weeks. The entire life cycle takes about 3 1/2 days at 20°C with each adult hermaphrodite producing 250-350 progeny.
C. elegans Anatomy 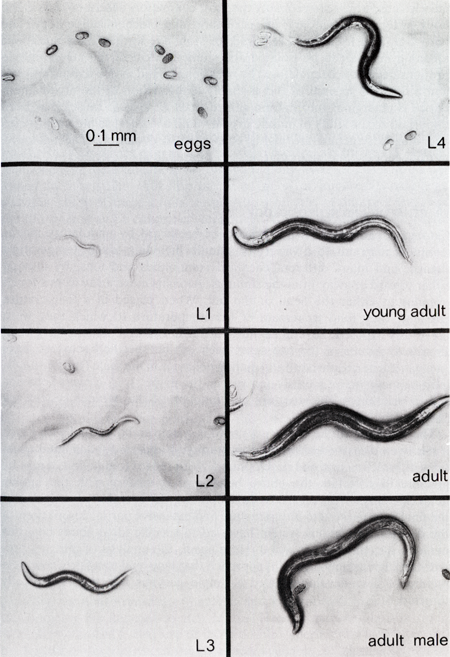 The molecular genetics of C. elegans is well developed. This nematode holds the distinction of being the first metazoan to have its genome sequenced. In addition, most of the tricks of the molecular geneticist have been employed in C. elegans: transgenics (including knockouts) have been made and RNA interference (RNAi)has been used effectively to downregulate gene expression. The small size of C. elegans (1mm), its short generation time (3 1/2 days at 20°C), and the large number of progeny produced per animal (250-350) are all important factors in its popularity for genetic analysis. Since genetic experiments frequently require the detection of rare events, it is an advantage to be able to grow a large number of individuals in a small space. A petri plate seeded with a single C. elegans hermaphrodite will contain nearly 105 individuals after one week. Confining those animals to the 2-dimensional agar surface permits the observation of rare individuals in large populations with the aid of a dissecting microscope.

Because self-fertilization drives populations to homozygosity, it is easy to isolate isogenic (genetically identical) clones of C. elegans. This advantage greatly facilitates the detection of mutants in a diploid organism. Since mutations first appear in the heterozygous condition, rare recessive mutations cannot be recognized in the F1 progeny of mutagenized animals when mated with wild type. In C. elegans, heterozygous hermaphrodites automatically segregate homozygous mutants as one fourth of their progeny, compared to “male/female” organisms where segregation of homozygous mutants requires brother-sister matings and where homozygotes only appear in the third generation after mutagenesis. Additionally, C. elegans hermaphrodites may be grown and screened for mutants together, since there is no danger of losing the homozygous form of a mutant by cross-fertilization. It is also advantageous that self-fertilization does not require copulation, allowing severely uncoordinated or deformed mutants to be propagated as homozygotes. Thus, many mutations that would be lethal in Drosophila or in the mouse are viable in C. elegans. This not only simplifies maintenance of genetic stocks, but it makes possible the growth of large populations of such mutants for biochemical analysis.

Reproduction by self-fertilization, though convenient for mutant isolation and maintenance, does not provide a means to recombine independently isolated mutations. Genetic analysis therefore depends on the existence of males, which are produced spontaneously in hermaphrodite populations by meiotic non-disjunction at a frequency of 0.1%. Males posses 5 pairs of autosomes and one X chromosome, while hermaphrodites posses two X chromosomes in addition to the autosomal complement (the XX vs. XO system). Males are distinguished from hermaphrodites by their smaller size and by the fan-like copulatory bursa at the tip of the male tail. A male culture can be propagated by mating males with hermaphrodites. Half the progeny produced by such cross-fertilization are male. A culture of wide-type males can be constantly maintained and these males can be used for mating with mutant hermaphrodites. Such crosses produce heterozygous males that are then used to transfer the mutant marker to other hermaphrodites, so that genetic mapping and complementation tests are possible. 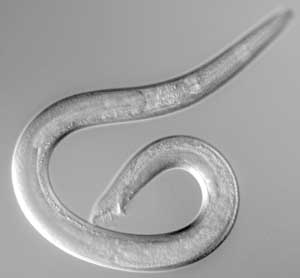 The majority of the mutants characterized to date are non-lethal and display a clearly visible phenotype. A large number of mutants are "uncoordinated" (now representing nearly 100 genes). Uncoordinated phenotypes range from small aberrations in movement to nearly complete paralysis. There are some great movies of hermaphrodite, male and mutant movement at Dr. Ian Chin-Sang's website.

Morphological mutants include dumpy, small, long, and blistered animals. Dumpy mutants are shorter than wild-type animals and correspond to twenty different genes dispersed over the six chromosomes and are useful for mapping most other classes of mutants, since the double mutants are easily distinguished. Both morphological and uncoordinated mutants can be used for mapping many types of developmental mutants.

Maintaining genetic stocks of mutants and wild type strains is less difficult with C. elegans than with some other organisms used in developmental or behavioral studies, such as Drosophila or the mouse. Stocks of C. elegans remain viable when frozen and stored in liquid nitrogen.

Consult Leon Avery's C. elegans server and Wormbase for more information about the molecular genetics of the worm.

All the following information is from the more extensive information at theWormbase WIKI.

Genes are given names consisting of three or four italicized letters, a hyphen, and an italisized Arabic number, e.g., dpy-5 or let-37 or mlc-3.

Gene names are typically defined by mutant phenotype or by sequence similarity to known genes.

Genes with related properties are usually given the same three-letter name and different numbers for instance there are more than twenty different dumpy genes: dpy-1, dpy-2, dpy-3, and so on.

The protein product of a gene can be referred to by the relevant gene name, written in non-italic capitals, e.g., the protein encoded by unc-13 can be called UNC-13.

Phenotypic characteristics can be described in words, e.g., dumpy animals or uncoordinated animals. If more convenient, a nonitalicized 3-letter or 4-letter abbreviation, which usually corresponds to a gene name, may be used. The first letter of a phenotypic abbreviation is capitalized, e.g., Unc for uncoordinated, Dpy for dumpy.