From OpenWetWare
Jump to navigationJump to search
Wellesley College

Single nucleotide polymorphisms (SNPs, pronounced “snips”) represent the simplest type of genetic variation between individuals. A SNP refers to a specific location in the genome where different people have been shown to have a different nucleotide. If more than one percent of the population has a different nucleotide at a particular location, that location is considered a SNP. If less than one percent of the population has a different nucleotide, it is considered a mutation (Alberts et al. 2010).
There are approximately 3 million SNPs throughout the human genome, yet they do not all behave independently. Groups of nearby SNPs are often inherited together in what are called haplotype blocks (see Figure 19-36 in your Alberts text). Depending on the region of the genome and the location of prior meiotic recombination, a haplotype block can span one or many genes.
Some SNPs appear to be benign, while others are associated with an increased risk of developing disease. To try to determine genetic risk factors for disease, scientists have compared SNPs in healthy individuals to SNPs in individuals with a particular disease. If a SNP is associated with an increased risk of disease, it’s important to keep in mind that it may not be causative. Furthermore, many SNPs that are associated with disease confer only a modest increase in disease risk. In this lab, you will have the opportunity to experimentally examine a SNP located within the TAS2R38 gene (also called the PTC Taster gene). While variations in TAS2R38 genotype had long been thought to be benign, recent work has suggested a correlation between TAS2R38 genotype and disease risk (Carrai et al. 2011, Lee et al. 2012).

In the 1930’s Arthur Fox, a chemist at Dupont, synthesized phenylthiocarbamide (PTC). While transferring the compound to a bottle he generated a cloud of PTC dust which elicited a dramatic response in his lab mate. Although Fox tasted nothing, his colleague, C. R. Noller, complained that the dust was intensely bitter. (If you are interested, Arthur L. Fox’s original 1932 paper, The Relationship Between Chemical Constitution and Health, can be read at the web site of the journal, The Proceedings of the National Academy of Science.)
Since Fox's serendipitous discovery, variation in the ability to taste PTC (and other related bitter compounds such as those found in broccoli!) has become one of the most studied human genetic traits. On the surface, PTC sensitivity appears to be inherited as a simple Mendelian trait with two alleles, T for taster and t for nontaster. In reality its inheritance is much more complicated. Today we know that PTC sensitivity is mediated by the PTC Taster gene (aka TAS2R38) that encodes a bitter taste receptor (a heteromeric G-protein coupled receptor) which is found on the surface of cells of the tongue (Kim et al. 2003).
Additional studies of the PTC Taster gene in humans across the globe have revealed that there are two common alleles, taster and nontaster; however, there are at least nineteen other rare alleles that affect the taster phenotype. These different forms of the gene code for proteins that vary in their ability to bind bitter compounds such as PTC. The two common alleles of the PTC Taster gene differ by three SNPs (see table below).

A Subset of the Polymorphic Sites in the PTC Taster Gene

The common nontaster allele has a G at nucleotide position 145 (G145), T at position 785 (T785) and A at position 886 (A886). This nontaster allele (G145/T785/A886) produces a polypeptide with alanine, valine and isoleucine at these sites and therefore is referred to as the AVI allele. The common taster allele C145/C785/G886, produces a polypeptide with proline, alanine, and valine at these sites and is referred to as the PAV allele. 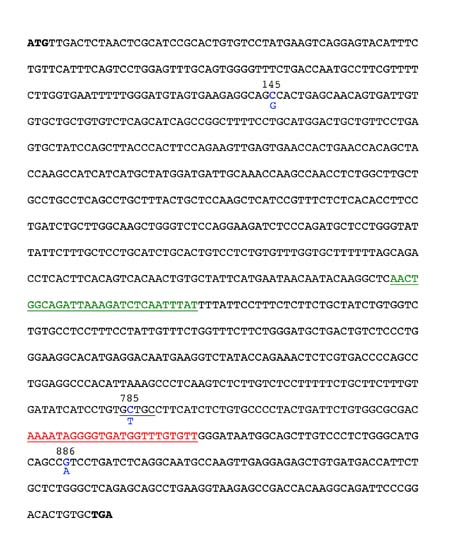 Figure 1. Sequence of the common Taster allele of the PTC gene. The 3 SNPs are highlighted in blue with the nucleotide found in the common nontaster allele shown below the taster. The position of the forward and reverse PCR primers are shown in green and red, respectively. The Fnu4H1 site that will be present in your PCR products and which you will exploit for genotype analysis is underlined in black surrounding position 785.


In two-weeks of lab experiments and a third lab meeting of discussion, you will be provided with a phenotype and determine the genotype at the PTC Taster gene locus of a hypothetical Wellesley student. You will also explore some of the ethical issues surrounding personal genomics and learn more about writing a scientific paper. In the first week you will be given a sample of human DNA representing an individual with a self-described PTC phenotype and an unknown PTC Taster genotype. You will begin the process of determining your sample’s genotype by extracting and purifying human DNA contained within bacterial plasmids (a plasmid is a circular piece of DNA). You will then use the polymerase chain reaction (PCR) to amplify a region of DNA that contains a SNP in the PTC Taster gene. PCR is a technique which exploits in vitro DNA replication by a heat stable DNA polymerase to produce millions of copies of a specific DNA sequence. In addition, we will watch a video about some of the ethical issues related to the use of SNPs and other genetic information. In the second lab you will experimentally determine your sample’s genotype by digesting your PCR product with the restriction enzyme Fnu4H1 and analyzing the products by agarose gel electrophoresis. You will then analyze phenotype and genotype data from the entire course and make figures in preparation for a data analysis meeting. You will also outline your introduction and discussion sections to use in a writing workshop to prepare you for writing a partial scientific paper on your findings.


PART II: Dilution of your DNA for use in the PCR reaction
You probably purified between 5 and 15 μg of plasmid DNA! Since it is ideal to use less than 1 ng of plasmid DNA in a PCR reaction, you will need to make a 1/10,000 dilution of your DNA in water. You could add 1 μL of plasmid DNA to 9,999 μL of water, but this would not be a very accurate way to make a 1/10,000 dilution. Therefore, you will set up a series of dilutions to obtain your desired final dilution.

PART III: PCR of your PTC Taster gene (using PuRe Taq Ready-To-Go Master Mix beads (GE Healthcare)
Next, you will set up a polymerase chain reaction (PCR) designed to amplify a portion of your extracted DNA. Specifically, we will amplify the region of the PTC Taster gene that contains the SNP at position 785 (the one which creates a Fnu4H1 site if a C is present). We need to use PCR so we will have enough DNA to specifically analyze the region of the PTC Taster gene surrounding the SNP at position 785. The forward and reverse primer sites (where the primers will bind) for our reactions are shown in Figure 1. In your notebook record the sequences of the forward and reverse primers. Use the convention of writing the primer sequence beginning with the 5’ end. As you determine the primer sequences, keep in mind that your template DNA will initially be double stranded (just one of the strands is shown in Figure 1). The strand shown in Figure 1 is represented in the 5' to 3' orientation. Imagine that the complementary strand is also there (the complementary strand must be in the 3' to 5' orientation since the two DNA strands are antiparallel). The two template DNA strands will separate during the denaturation phase of the PCR reaction and then the primers will be able to anneal during the annealing phase of the PCR reaction. To determine the orientation of the primers, keep in mind that newly synthesized DNA will be made in the 5' to 3' direction (therefore new nucleotides will be added to the 3' end of the primer) during the extension phase of the PCR reaction. Have your instructor check your sequences before proceeding.


Here is the cycle we will use for your samples:
First, there is an initial step for 10 minutes at 95C to activate the polymerase.
This is followed by 40 cycles with the following pattern:
1 minute at 95C, for “melting” the DNA
1 minute at 55C, for annealing the primers to the single stranded DNA
1 minute at 72C, for synthesizing new DNA
There is then a 10 minute stage at 72C, to complete whatever synthesis has been started.
Finally, the tubes are chilled at 4C until someone moves them to the freezer for longer term storage.

The Answers to the following questions will be turned in at the beginning of Lab 7. You may download a .doc file of these questions here Media:Taster_questions110112_F12.doc‎ to use as a template for your answers.

The following terms should be used to fill in the blanks for questions 1-3. Each term must be used one time.

4. Ingrid has the following SNPs on one copy of chromosome 20:


Determine if the following combinations of SNPs are considered to be a haplotype only, an allele only, or both.

5. Think about the results you expect from next week's electrophoretic separation. After considering all you now know about PTC gene polymorphisms, draw the expected migration locations of the Fnu4H1 digested PCR product obtained from a homozygous taster C785/C785(left lane), a homozygous nontaster T785/T785 (center lane) and a heterozygote C785/T785(right lane) on a diagram of an agarose gel (template shown below). 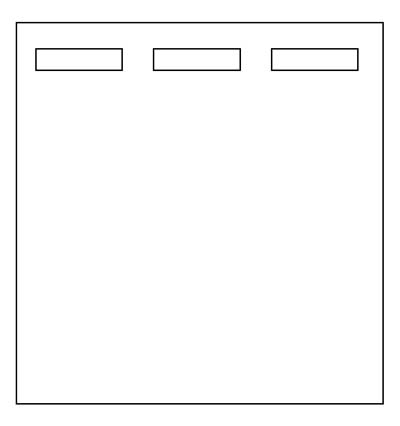 Link to the Labs in this Series & in the Photosynthesis Series