Figure 1. Phenylalanine (a, position 20) and Threonine (b, position 22) residues highlighted in the context of the V3 region, as imaged by StarBiochem. These structures showed to be non conserved regions as a part of a Beta sheet, according to the original PSIPred results. Comparing this structure against StarBiochem shows the PSIPred results to be inaccurate in determining the beta sheet region. Rather, these amino acids are predicted to be between successive Beta sheets. These residues were highlighted as they showed change and non conservation amongst the progressing group sequences 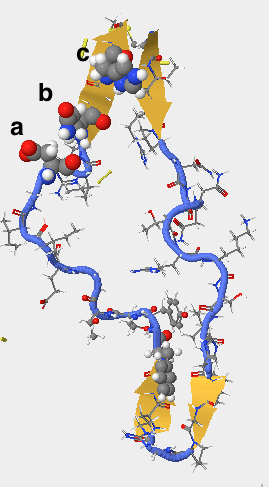 Figure 2. Aspartate (a), Glutamine (b) and Histidine (c) (at positions 29, 32 and 34 on the V3 region, respectively) shown in context of the entire V3 region, as imaged by StarBiochem. PSIPred determined these residues to be components of an alpha helix, which is inconsistent with the secondary structures predicted by StarBiochem. These residues were highlighted as they showed change and non conservation amongst the progressing group sequences.

Discovery Questions taken from Campbell, A.M. and Heyer, L.J. (2003), Chapter 4 and can be found on the Week 10 Assignment page.

1. (Question 5, p. 110) Choose two genes from Figure 4.6b (PDF of figures on MyLMUConnect) and draw a graph to represent the change in transcription over time. 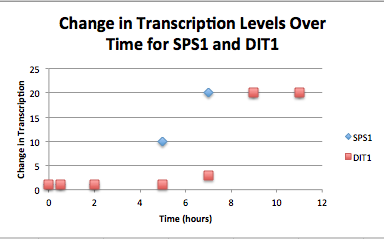 
2. (Question 6b, p. 110) Look at Figure 4.7, which depicts the loss of oxygen over time and the transcriptional response of three genes. These data are the ratios of transcription for genes X, Y, and Z during the depletion of oxygen. Using the color scale from Figure 4.6, determine the color for each ratio in Figure 4.7b. (Use the nomenclature "bright green", "medium green", "dim green", "black", "dim red", "medium red", or "bright red" for your answers.) 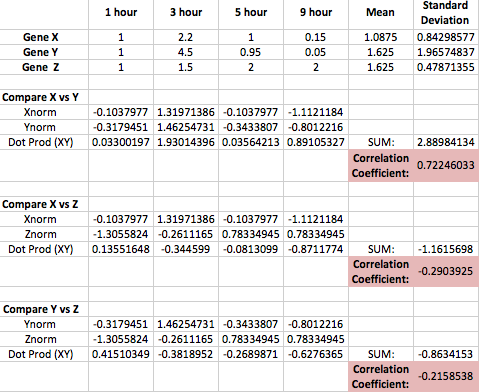 The correlation coefficient was calculated between genes to check if they were transcribed similarly. None of the coefficients approach 1 or -1, showing no sign of similarity.


4. (Question 9, p. 118) Why would most spots be yellow at the first time point? I.e., what is the technical reason that spots show up as yellow - where does the yellow color come from? And, what would be the biological reason that the experiment resulted in most spots being yellow?

Most spots are yellow at the first time point because at the initial time point, genes are not able to be induced or repressed, so transcription is not affected yet. Yellow is a combination of the Red and Green colors.


5. (Question 10, p. 118) Go to the Saccharomyces Genome Database and search for the gene TEF4; you will see it is involved in translation. Look at the time point labeled OD 3.7 in Figure 4.12, and find the TEF4 spot. Over the course of this experiment, was TEF4 induced or repressed? Hypothesize why TEF4’s change in expression was part of the cell’s response to a reduction in available glucose (i.e., the only available food).

The TEF4 data was accessed on the Sacchromyces Genome Database. Over the course of the experiment, TEF4 goes from yellow towards a bright green. This shows that the gene was repressed over time.

The tricarboxylic acid cycle converts the products of alcohol dehydrogenase to acetyl-CoA. Pyruvate carboxylase is induced which shifts pyruvate towards oxalacetate to enter the TCA cycle. Phosphoenolpyruvate carboxykinae and fructose 1,6-biphosphatase are induced, which are part of glycolysis. Inducing the TCA cycle allows the cell to maximize energy yield.

7. (Question 12, p. 120) What mechanism could the genome use to ensure genes for enzymes in a common pathway are induced or repressed simultaneously?

The genome can ensure genes for enzymes in a common pathway are induced or repressed simultaneously by clustering genes of similar expression patterns within the same/similar promoter sequence. This is consistent with the Guilt By Association method of predicting gene functions and transcription factors.


8. (Question 13, p. 121) Consider a microarray experiment where cells deleted for the repressor TUP1 were subjected to the same experiment of a timecourse of glucose depletion where cells at t0 (plenty of glucose available) are labeled green and cells at later timepoints (glucose depleted) are labeled red. What color would you expect the spots that represented glucose-repressed genes to be in the later time points of this experiment?

The DNA chip will appear red at the glucose-repressed spots because TUP1 is not present to repress glucose.


9. (Question 14, p. 121) Consider a microarray experiment where cells that overexpress the transcription factor Yap1p were subjected to the same experiment of a timecourse of glucose depletion where cells at t0 (plenty of glucose available) are labeled green and cells at later timepoints (glucose depleted) are labeled red. What color would you expect the spots that represented Yap1p target genes to be in the later time points of this experiment?

Yap1p target spots will appear red on the DNA chip. Glucose will be depleted at later time points because the glucose-repressing genes are repressed.


11. (Question 16, p. 121) Using the microarray data, how could you verify that you had truly deleted TUP1 or overexpressed YAP1 in the experiments described in questions 8 and 9?

To verify the deletion or over expression of the transcription factor, the gene that codes for the TF should be included on the assay. That way, its presence may be quantified and compared to other genes affected.