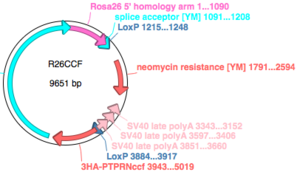 ApE is a proprietary sequence editor using a modified GenBank format to save sequences. The software can be used for assembly of sequencing traces, virtual digests, sequence annotation, and schematic sequence representation. It was created and is maintained by Wayne Davis from the University of Utah. The current stable version, as of June 2010, is 1.17 and the software runs on Windows, Mac, and Unix. The software is free but donations are encouraged.

There is a serious bug affecting the alignment function in recent versions of ApE (I have encountered it in 2.0.39 - 2.0.45 at least, may affect all 2.0.X versions?) released over the last ~12 months, including the current release (2.0.45). In some cases where the sequences differ by a single base-pair indel, the alignment output by ApE is incorrect and the mismatching residues are not highlighted in red as expected. This can make it very easy to miss small deletions when checking your sequencing data against the expected sequence. This should be corrected in the yet-to-be-released version 2.0.46. See bug report here ("Misalignment of sequences with indels (sometimes)"). Use with caution! --Damian Ekiert 12:19, 22 February 2013 (EST). The current version, v2.0.46, doesn't have this issue, says bug report -- JM 9/2013

Links to the ApE homepage