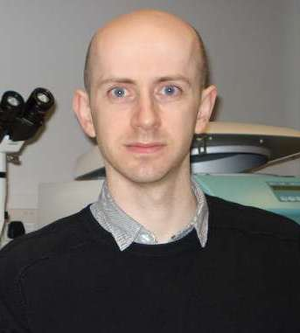 Mark received a BEng. in Mechanical Engineering from the University of Limerick in 2001, a MSc. in Cell and Tissue Engineering from Keele University (United Kingdom) in 2003 and a PhD in Biomedical Engineering from Keele University in 2007. His PhD research focused on the development of a novel spherical indentation system to characterise the mechanical behaviour of cell seeded hydrogels. He subsequently worked as a post-doctoral research associate for three years at Keele University where he developed an in vitro corneal wound healing model for pharmaceutical screening, in addition to working on other projects. Mark joined the Trinity Centre for Bioengineering (TCBE) as a post-doctoral research fellow in October 2010 to primarily work on developing a growth factor delivery scaffold for articular cartilage repair. In June 2012 he commenced work as a research fellow and principle investigator in TCBE in the field of corneal tissue engineering and cornea repair after obtaining an Starting Investigator Research Grant from Science Foundation Ireland (SFI) and the Marie-Curie COFUND. More recently, in December 2014 he was successful in obtaining an ERC starting investigator research grant to develop a cell based therapy for corneal regeneration. The primary goal of his research is to investigate and develop novel stem cell, tissue engineering and biomaterial based approaches to corneal repair and regeneration.

Karl joined Dr. Ahearne’s corneal tissue engineering group in July 2015. He received his doctorate in Chemical and Biomolecular Engineering from the University of Nebraska (USA) in 2010 where he worked on polymer surface modification to create a biomimetic vascular surface, replicating the method the vascular endothelial cell inhibits thrombin formation and prevents clot formation in blood vessels. He then moved to the field of retinal tissue engineering and cell transplantation at the Bascom Palmer Eye Institute at the University of Miami, moving with his lab to the University of California, San Diego where he was a member of the Shiley Eye Institute and Institute of Engineering in Medicine. His current project is focused on creating a scaffold to support the migration and function of corneal cells.

Claire joined the Ahearne lab at TCBE as a PhD research student in September 2015. She obtained a First Class Honours BSc. Chemistry degree from University College Cork, also being awarded an Oxford University Press Achievement in Chemistry Prize during her undergraduate studies. Claire’s research projects to date have involved an interdisciplinary approach, with an overall focus on functional biomaterials. She carried out an internship in Materials Chemistry at the Centre National de la Recherche Scientifique (CNRS) in Paris, as well as working as a Laboratory Teaching Assistant at Cornell University, New York, before pursuing her current research in Corneal Bioengineering.

Julia joined the the Ahearne lab at TCBE in October 2015 as a PhD student to examine the influence of biochemical factors on corneal cell behaviour and scaffold design. She received a Bachelor Degree in Human Biology from Pompeu Fabra University in Barcelona. She graduated from the Technical University of Dresden where she obtained her Master in Science in Molecular Bioengineering.

Sophia joined the Ahearne Lab in September 2016 as a PhD student to study the mechanical regulation of corneal cell behavior. She received a BSc in Biochemistry from University College Dublin followed by an MSc. in Molecular Medicine from Trinity College Dublin. Her project will primarily focus on how different mechanical stimuli affect corneal epithelial cells.

Amy joined the Trinity Centre for Bioengineering as a PhD student in July 2012. Her research focused on engineering corneal tissue in vitro by culturing stem cells in three-dimensional scaffold. This project investigated the potential of adipose-derived stem cells (ASC) to differentiate into a subset of corneal cells called keratocytes. In addition, different methods of fabricating biomimetic scaffolds will be assessed with the objective of developing functional corneal tissue that could act as an alternative to transplantation of donor cornea. She successfully defend her PhD thesis in September 2016.