BioPrimer6: Picture this!
E. coli do not normally respond to light but a recent publication describes a combination of genes that lead to light-responsive expression of β-galactosidase in E. coli. Recall from your study of the lac operon in biology classes that β-galactosidase is an enzyme encoded by the LacZ gene. Normally the protein cleaves the disaccharide, lactose, into two monosaccharides, galactose and glucose.

For the bacterial photography system, the "coliroid" cells producing LacZ cleave an indicator compound, giving rise to a black precipitate. When the cells are grown in the dark, transcription of LacZ is high and the indicator in the media turns black. When the cells are grown in the light, there is very little transcription of the LacZ gene and the media’s natural color (yellowish) shows through.

For today, you can get used to this system. You’ll plate a layer of cells on indicator medium, and then incubate the dish with a mask until next time. You and a partner can pick any image you'd like to develop. You expect the areas of the plate that are grown in the dark will turn a dark color, and the areas grown in the red-light to stay light colored.

Some media is prewarming in a 42°C waterbath for you. The media is traditional LB supplemented with ferric ammonium citrate and “S-gal,” an artificial substrate for beta-galactosidase. When the enzyme cleaves S-gal in the presence of iron, a black precipitate forms changing the color of the media. The media also has agarose so it will harden as it cools.
Working in small groups:

In our last few minutes

Regroup with your preliminary groups and think again about the ideas you put down for projects last week. If you have modifications, amplifications, new ideas, then great! Hand them in and we'll add them to the list for you to consider with your senior mentors tomorrow. 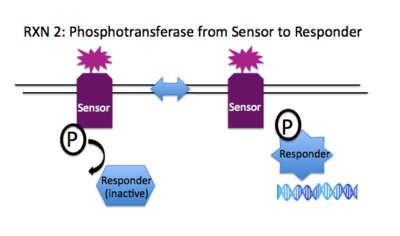 Two Component Signaling
In designing a synthetic biological system it can be helpful (to you and to others) to describe the system using a high level design language that can simplify or "abstract" what's going on with the system. For example the bacterial photography system might be depicted as two key devices, one device that detects a signal and a second device that generates an output upon receiving information from the first device. Such a “black box” depiction of the system's operation enables easy re-use of the devices by others as well as helpful specifications for the needed connections between the devices (versus the materials needed for operation within them). For example, light is the input for the bacterial photography system, but it's straightforward to retask the system as a chemical sensor instead: just swap out the first "input sensing device" from one that's sensitive to light to one that's sensitive to your chemical of interest. Similarly, the output of the bacterial photography system is a black colored product but imagine hooking up the light sensing input device to chemotaxis as the output...then the cells might swim to the light rather than turn a color in response.

The bacterial photography system can be abstracted as two devices:

We can mimic the circuitry in the bacterial photography system using electrical components.

The devices are connected through an operational amplifier and a resistor of varying impedance. We can thus use these two devices to build a circuit that will operate similarly to our bacterial photography system: the photodiode will sense light and generate an electrical signal that will be detected by the LED which produces a color. Depending on your goals, it might be sufficient to build the circuit with the largest resistor in place for the OpAmp, since this circuit should behave identically to the bacterial photography system (i.e. the LED on in the dark and off when the flashlight is shining on the photodiode). If you'd like to explore the issue of "gain" in the signaling system, then the resistor associated with the OpAmp can be swapped out for smaller ones, and the system can be observed to behave less digitally since the gain will be proportional to the resistance.The instructions for this build are here. Scroll down to Part II.
As you work through this exercise, consider how the lessons learned from experimenting with an electronic circuit would map to the engineering of biological systems.

Model and Simulate the System: the TinkerCell CAD tool

Computer-aided design (CAD) is a hallmark of several mature engineering disciplines, like mechanical engineering or civil engineering. These engineers can rely on computer simulations to reliably predict the behavior of a car or a bridge, rather than run a hundred cars into walls or over bridges to see how those cars and bridges do. Biological engineers have fewer good CAD tools at their disposal. More often, at least for now, run laboratory experiments to test a system. But wouldn't it be nice (and quicker and less expensive too!) to try a few things on a laptop first? And then, with some good biological designs in hand, we could turn to the bench with more confidence, having eliminated the clear failures. 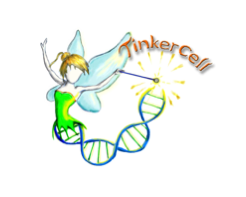 Tinkercell
One early effort at a CAD tool for synthetic biology is Tinkercell. This program was developed by engineers at the University of Washington and it allows you to visually construct and then simulate/analyze a biological network. With the instructions that are here, you can use Tinkercell to build the genetic circuit that underlies the bacterial photography system. For those who would like to read more about the TinkerCell CAD tool, you can find the details in a Journal of Biological Engineering article that you can find here.


The TinkerCell application has been downloaded onto the class laptops, or you can download it onto your computer for free from here. The instructions in this tutorial were written for the Mac-based version of the program. If you are running TinkerCell on a PC, you may see some subtle differences.

We will not meet as a class today but you are expected to spend the 1.5 hours that you might have enjoyed in 26-152 looking at the requirements for the upcoming 3-Ideas Presentations and planning a project for which you can articulate at least 3 of these 5 points: