“Addition by subtraction” is a counterintuitive adage that holds true in a remarkable number of instances. Managers of sports teams have seen fortune turnaround after the departure of one problematic or disruptive player. Cooks find some recipes tastier once some overwhelming or incongruous ingredient is removed. Simplification has benefits but looking around, the living world appears far from simple. Biology does not seem to conform to unifying principles such as E=mc^2 or Boyle’s Law. There are a few rules that hold true of all organisms (they evolve, they use energy, they’re made of cells) but what the science of biology explores is the awesome diversity of the living world. Survival is a challenge and cells have evolved complex responses to meet the demands. Even a superficial examination of existing genomes reveals content that influences the cell’s existence only some of the time, for example genes to express when food is scarce, genes for protective proteins if temperature or salts rise, genes that respond to viral attacks. Genomes also carry the history of such challenges. Even single celled organisms like E. coli bear scars such as integrated cryptic phage, transposon sequences that once hopped but are now frozen, and damaged genes that have functional duplicates elsewhere in the genome. Genomes are complex historical artifacts that continue to exist and react in instructive and interesting ways.

Whole-genome sequence information is being used for both bottom up and top down re-engineering of cells. In a bottom up approach, the genetic components for a “minimal cell” would be specified and built from raw chemicals. Success in this endeavor would confirm a complete genetic “parts list” that enables life to exist in a given environment. Success would also require a precise definition of life (think back to your Module 1 editorial work). In a top down approach, existing cells would be paired down to their minimal genetic content, revealing sequences that are non-essential under a defined set of conditions. Further examination of such “deletion strains” would reveal responsive but often-unnecessary functions encoded by the genome as well as the redundant features that may have arisen in response to the cell’s evolutionary history. Such deletion strains could also open up genetic “real estate” to add novel functions to cells.

It’s no trivial effort to build cells either by composing from chemicals up or by paring existing cells down. Gene prediction programs are flawed and modifications to genomes can have unexpected detrimental effects. Yet as sequence information becomes available for whole-genomes from related species, it’s possible to compare related bugs and make some guesses about which G's, A's, T's, and C's must stay and which might go. 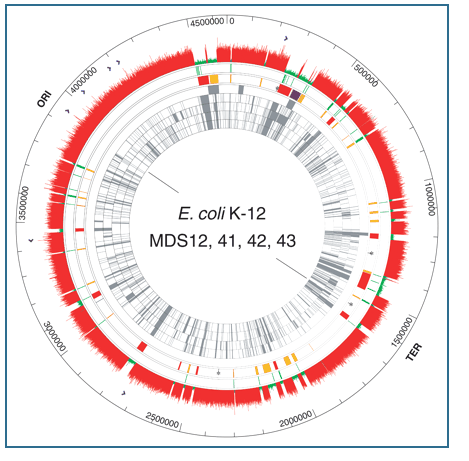 This is precisely the approach taken by Fred Blattner and colleagues in their 2006 paper. Beginning with the 4,639,675 base pair genome of an E. coli K-12 strain called MG1655, the researchers identified ~100 regions that were present in MG1655 but were absent in 5 other closely related E. coli strains. Using a specialized recombination method called “lambda Red” that can precisely excise sequences without leaving scars, MG1655 was systematically reduced to give strains anywhere from 8 to 15% of their original size. These new strains are called MDS, for “multiple deletion strains.” You will be working with MDS12, 41, 42, and 43 as well as an unpublished deletion strain, MDS-60 (gift from Fred Blattner), today.

Characterization of the deletion strains showed some surprising things. The most extreme deletions gave rise to bacteria that could take up exogenous DNA more efficiently (remember the transformation efficiency measurements you did in the first experimental module!), that could maintain plasmids seen to be unstable in other bacterial hosts, and that spontaneously mutated ~20% less often. These emergent properties of the reduced genomes provide a genetic example of “addition by subtraction” and a useful foothold for our follow up experiments with our redesigned M13.

You’ll work on two simple math problems for today: First, you’ll add a redesigned M13 to one of the lab’s collection of deletion strains so that next time you can titer the phage from the supernatant of these strains. Second, you’ll peel away portions of a slide’s surface coat so that next time you can add phage nanowires to the places where the coat remains. The slide’s coats are ITO (“indium tin oxide”), which is a transparent conductive material. Eventually, the ITO will serve as the electrodes of our phage-based electrochromic device (preview the device architecture here)

There are two dangerous parts in today's lab. You will be working with an Exact-O knife to carefully cut a pattern onto your slide. These knives are extremely sharp and everyone should show the greatest care in handling these or you will end up at MIT medical. The second danger is the concentrated acid treatment needed to pattern the slides. You must, must, must wear lab coat, closed-toed shoes, gloves (perhaps double gloves), and goggles when you are dealing with the HCl, HNO3 solution. In today's lab it will be the teaching faculty who suit up to do this.

14. Remove the tape from the surface. If there are bits of glue left on the slide, you can clean them off with a cotton-tipped applicator that you dip in methanol. You must remove all glue and tape from the slide before depositing the nanowires.

As a class we will be comparing the production of phage (M13K07 and M13.1) from a "standard" lab strain, namely MG1655, and a "minimal" strain from the MDS collection. Four of these minimal strains (MDS12, MDS41, MDS 42, MDS43) are described in a 2006 Science article from Fred Blattner's group. A fifth strain, MDS60, is an unpublished strain with additional genomic deletions. We will make the strains competent for transformation using the protocol described by Inoue, Nojima and Okayama in their 1990 publication.

You should be on your way to becoming an expert on your research topic. You should have been reading and thinking a lot about it and you may feel
(a) like there's too much to read
(b) like you have too many ideas and no way to map or prioritize them
(c) like you don't understand what you're reading
(d) all of the above.


One of the best ways to help frame the problem for yourself is to discuss it with someone new. While your slides are in the acid bath, you will have time to talk with another lab group. That group will offer you a fresh ear to consider your proposal. Try to describe your research problem to them. Articulate why it's important. Tell them about some recent, relevant data. Describe what you're proposing to do and what the findings from your experiments might reveal. Throughout your discussion, keep careful track of the questions they ask since these will point you to the confusing concepts or fuzzy parts of your explanation or understanding.

Then be a good listener to hear the proposal that they've been working on. Ask lots of questions. No questions are dumb. You are there to offer a naive ear and seek complete explanations. You will have time at the very end of class to reconvene with your own lab partner to hear how their conversation went. Try to identify repeated questions or concerns since these are probably the holes in the project as it stands. You can rework your proposal based on the conversations you've had.

Suggested numbers of slides are listed here but the number may vary depending on the particulars of your proposal. You will have time to work on the presentation in lab next time as well as ask questions about the format, but you should begin to prepare, in powerpoint or similar presentation program, the materials you need.