Real-time reverse transcription-polymerase chain reaction (RRT-PCR) allows researchers to monitor the results of PCR as amplification is occurring (this technique is also referred to as quantitative or real-time PCR). During RRT-PCR data are collected throughout the amplification process using a fluorescent dye. The fluorescent dye is highly specific for double-stranded DNA and when bound to DNA molecules the fluorescence intensity increases proportionate to the increase in double-stranded product. In contrast, the data for traditional PCR are simply observed as a band on a gel (remember back to M1D5).

The fluorescent dye binds to double-stranded DNA during the cycles of PCR. At the annealing temperature the primer (blue arrow) binds to the template (black line). During an incubation at the extension temperature the new copy of DNA (orange dashed arrow) is sythesized by the polymerase enzyme. The inactive fluorescent dye molecules present in the reaction (grey stars) bind to the newly generated double-stranded DNA and become activated (green stars). To eliminate clutter, the basepairs between the DNA strands were omitted. An animation of this process is linked here.

For the purpose of your AIV screening assay, your RRT-PCR data will be used to test the sensitivity of the primers you designed on Day 2 of this module. Primers with high sensitivity can better detect AIV from flu-positive bird samples. Why are primers with high sensitivity better? The sensitivity of the primer determines its ability to identify and bind the target sequence. If primer binding is enhanced then amplification is improved and the presence of AIV is more likely to be detected. In addition, primers with lower sensitivity can give false positives and hinder the development of models that aid researchers in understanding AIV abundance and epizootiology in wild birds. 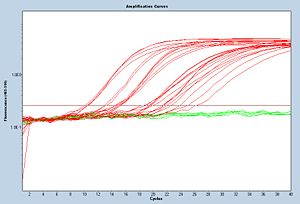 Example amplification curve. These data were collected by Sp14 20.109ers!

Example melt curve. These data were collected by Sp14 20.109ers!

To compare the sensitivity of your primers to the sensitivity of those currently used in the Runstadler lab you will examine the CT values from your RRT-PCR assay. The CT values are displayed as an amplification curve following RRT-PCR (these values are also given numerically). The initial cycles measure very little fluorescence due to low amounts of double-stranded DNA and are used to establish the inherent background fluorescence. As double-stranded product is produced, fluorescence is measured and the curve appears linear. This linear portion of the curve represents the exponential phase of PCR. Throughout the exponential phase, the curve should be smooth. Sharp points may be due to errors in reaction preparation or failures in the machine used to measure fluorescence. As mentioned previously, the first cycle in which the fluorescence measurement is above background is the CT. During the later cycles the curve shows minimal increases in fluorescence due the depletion of reagents.

Following the RRT-PCR amplification measurements, a melt curve is completed. Melt curves assess the dissociation of double-stranded DNA while the sample is heated. As the temperature is increased, double-stranded DNA ‘melts’ as the strands dissociate. As discussed above, the fluorescent dye used in RRT-PCR associates with double-stranded DNA and fluorescence measurements will decrease as the temperature increases. In RRT-PCR, the melt curve is used to confirm that a single amplification product was generated during the reaction. If additional products were present, the melt curve would presumably show additional peaks. Why might this be true? Can you think of a scenario where two different products would produce a single peak in a melt curve?