Last time you reacted your 16S PCR product with specially prepared backbone DNA, and then transformed the reaction product into an engineered cell strain. Eight independent colonies were selected from each of your plates and grown overnight in liquid culture. You will now isolate and sequence DNA from each colony, then pool your results with all other groups studying that particular bird sample to construct a phylogenetic tree representing the bacterial composition in that sample.

Last time we talked about the features of the transformation strain needed to synthesize and select for the whole plasmid, namely Cre recombinase and a lacZ mutation, respectively. Now let's talk about those features relevant to extracting DNA. As you can gather from the linked manual (PDF), the StrataClone SoloPack cells have endA and recA mutations, both of which make cloning go more smoothly. First, endA1 limits the non-specific destruction of plasmid (and chromosomal) DNA normally carried out by the EndA enzyme, thus maximizing DNA recovery. (The cells also have additional deficiencies in restriction-based nucleases.) Second, recA1 makes the cells incapable of homologous recombination, which could otherwise cause undesirable intermingling between the plasmid and chromosomal DNA.

The procedure for DNA isolation at this scale is commonly termed "mini-prep," which distinguishes it from a “maxi-prep” that involves a larger volume of cells and additional steps of purification. The overall goal of each prep is the same--to separate the plasmid DNA from the chromosomal DNA and cellular debris, allowing the plasmid DNA to be studied further. In the traditional mini-prep protocol, the media is removed from the cells by centrifugation. The cells are resuspended in a solution that contains Tris to buffer the cells and EDTA to bind divalent cations in the lipid bilayer, thereby weakening the cell envelope. A solution of sodium hydroxide and sodium dodecyl sulfate (SDS) is then added. The base denatures the cell’s DNA, both chromosomal and plasmid, while the detergent dissolves the cellular proteins and lipids. The pH of the solution is returned to neutral by adding a mixture of acetic acid and potassium acetate. At neutral pH the SDS precipitates from solution, carrying with it the dissolved proteins and lipids. In addition, the DNA strands renature at neutral pH. The chromosomal DNA, which is much longer than the plasmid DNA, renatures as a tangle that gets trapped in the SDS precipitate. The plasmid DNA renatures normally and stays in solution, effectively separating plasmid DNA from the chromosomal DNA and the proteins and lipids of the cell.

Normally in 20.109 we do an in-house mini-prep procedure according to the steps above followed by ethanol precipitation. However, because you are isolating DNA from so many colonies, today we will use a commercially available kit so that the work can go more quickly. The principle is the same as that of our "quick and dirty" (and cheaper!) prep, but is combined with the silica gel column purification you are familiar with from using other Qiagen kits.

After isolation, you will quantify your DNA by spectrophotometry. Nucleic acids (both RNA and DNA) have an absorbance peak at 260 nm. Beer's law may be used to quantify the amount of DNA from this peak: Abs = ε l c, where Abs is the measured absorbance, l is the path length (1 cm for most specs), c is concentration, and ε is the extinction coefficient. For DNA, ε is 0.02 (μg/mL cm)-1, so 1 absorbance unit corresponds to 50 μg/mL of DNA. The absorbance at 280 nm gives some indication of DNA purity, as proteins have their absorbance peaks at that value (primarily due to the aromatic peptides tryptophan and tyrosine). An Abs260:Abs280 ratio of ~1.8:1 is desired.

Miniprepped DNA will be sent for sequencing off-site. Each clone will be sequenced from two directions, in order to cover the entire 1400 bp region of interest. Together, you'll do 256 sequencing reactions per lab section!

The invention of automated sequencing machines has made sequence determination a relatively fast and inexpensive endeavor. The method for sequencing DNA is not new but automation of the process is recent, developed in conjunction with the massive genome sequencing efforts of the 1990s. At the heart of sequencing reactions is chemistry worked out by Fred Sanger in the 1970s which uses dideoxynucleotides (see schematic above left). These chain-terminating bases can be added to a growing chain of DNA but cannot be further extended. Performing four reactions, each with a different chain-terminating base, generates fragments of different lengths ending at G, A, T, or C. The fragments, once separated by size, reflect the DNA’s sequence. In the “old days” (all of 15-20 years ago!) radioactive material was incorporated into the elongating DNA fragments so they could be visualized on X-ray film (image above center). More recently fluorescent dyes, one color linked to each dideoxy-base, have been used instead. The four colored fragments can be passed through capillaries to a computer that can read the output and trace the color intensities detected (image above right). Your sample was sequenced in this way on an ABI 3730 DNA Analyzer.

Analysis of sequence data is no small task. “Sequence gazing” can swallow hours of time with little or no results. There are also many web-based programs to decipher patterns. The nucleotide or its translated protein can be examined in this way. Thanks to the genome sequence information that is now available, a new verb, “to BLAST,” has been coined to describe the comparison of your own sequence to sequences from other organisms. BLAST is an acronym for Basic Local Alignment Search Tool, and can be accessed through the National Center for Biotechnology Information (NCBI) home page.

In another week you will finally get to see the results of all your hard work!

Each partner today has eight minipreps to do. You may find it easier to complete the sixteen total minipreps in two shifts rather than to attempt to "quickly" pipet across sixteen samples. One approach you could take is the following: start with the first eight candidates (A group), then spin down the next eight (B group) during the 5 min lysis step for the A group; finally, start adding P1 to the B group when you reach the 10 min spin step for the A group. As one partner wraps up the B group, the other is welcome (but not required) to begin Part 4. Update: Most T/R folks chose to do all 16 at once, and this timing seemed to work out okay. There were definitely bottlenecks at both the spec and the sequencing plates, which might be reduced somewhat if a few groups do stagger. Note also that a few steps below were clarified with respect to when/where to discard flowthrough. 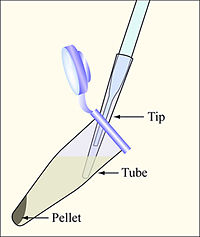 Aspirate the supernatant, as shown, removing as few cells as possible

Update: please spot check just 3 minipreps per person rather than all 8. Assuming all are reasonably similar, you can then choose an average or threshold value of DNA volume that should work for all sequencing reactions (e.g., use 2 μL in each one rather than sometimes 1 μL, other times 2.5 μL, etc.). The reactions should be robust within a few-fold DNA concentration.

As we will discuss in lab today, sequencing reactions require a primer for initiation. Legible readout of the gene typically begins about 40-50 bp downstream of the primer site, and continues for ~1000 bp at most. Thus, multiple primers must be used to fully view genes > 1 Kbp in size, such as your ~ 1400 bp 16S sequence. We will use forward and reverse primers that anneal to the vector upstream and downstream of the 16S insert in order to capture the entire sequence for analysis.

The recommended composition of sequencing reactions for this type and length of DNA is ~500 ng (though 200 ng should be plenty in a pinch) and 25 pmoles of sequencing primer in a final volume of 15 μL. Each of your sequencing reactions should thus consist of 5 μL of primer stock, and 10 μL of aqueous DNA. (For example, if you are adding only 2 μL of DNA for a particular candidate, you must add another 8 μL of water to complete the sequencing mixture.)

Each person will fill in 2 columns on a 96-well plate, according to the table below. Per team, each person should take two columns in a row, using the forward primer in the first column, and the reverse primer in the second column. Be sure to add only one of the two primers per sequencing reaction! After you have finished distributing each sample, cover that column with a strip of caps.

Update/clarification: Begin by adding sequencing primer to your columns using the multichannel pipet; double-check that each tip is correctly picking up the volume. Then you can either add pre-mixed DNA/water preparations individually to wells (be sure to make enough of each clone for both forward and reverse primer testing!), or you can add DNA individually and use the multichannel for water. Odd-numbered columns should contain forward primer and even-numbered columns should contain reverse primer.

Delayed to M1D7 due to instructor illness.

For each team, V corneae and/or E hellem templates were amplified according to the tables below. On a gel, ...

When you have a moment today, separately count the white, the light blue, and the blue colonies on your plate from last time and post them on today's Talk page. White colonies should be divided into center and edge locations, as the plate edges might not have enough X-gal. Note that light blue colonies may contain insert, particularly if the insert leaves the entire complementation peptide in-frame.

Don't forget to count the colonies we have already picked! These colonies are indicated by the starting numbers in the table. Update: Colony numbers and types can be inferred from the stickers that Ian left on the sides of your culture tubes. If you have no stickers, simply add 8 white center colonies to your count. If you have any stickers that say "B," these indicate that a light blue colony was picked. You may also have stickers that indicate colonies being taken from a plate that is not yours, if your plate did not have enough sound colonies; do not include these in your count.

Some of you have journal clubs next time. No other homework is due on Day 6. There is homework due for everyone on Day 7.