Contrary to how it may be taught in some laboratory classrooms, the process of scientific inquiry encompasses much more than the collection and interpretation of data. A key part of the process is design – of experiments that specifically address a hypothesis and of new materials or technologies. Moreover, any design is subject to continued revision. You might redesign an experiment or tool based on your own own research, or you might consult the vast body of scientific literature for other perspectives. As the old graduate student saying goes, “A month in the lab might save you a day in the library!” In other words, although the process of combing the literature can be arduous or even tedious at times, it beats wasting a month of your time repeating experiments already proven not to work or reinventing the wheel.

During this module, each of you will design and test a new version of inverse pericam (IPC). Today, we will refer to a few primary research articles in order to familiarize ourselves with this recombinant protein and its constituent parts. The fluorescent component of IPC is an enhanced yellow fluorescent protein (abbreviated EYFP), one of the many derivatives of green fluorescent protein (GFP). GFP is naturally produced by jellyfish and was cloned into other organisms in the early 1990’s. It has since been exploited as a genetically encodable reporter and mutagenized to vary its excitation and emission spectra. The other key component of inverse pericam is the protein calmodulin (CaM), a natural calcium sensor that is present in all eukaryotes (and briefly reviewed here). Calmodulin has many ligands that it binds only in the presence of calcium ion, including the peptide fragment M13. This conditional specificity for M13 binding is enabled by the change in CaM’s conformation when it binds calcium.

Within inverse pericam, M13 and CaM are located at opposite ends, surrounding a permuted (i.e., rearranged) version of EYFP. In the absence of calcium, this EYFP exhibits strong fluorescence. However, when calcium is added to a solution of inverse pericam, CaM and M13 interact, disrupting the conformation and, as a result, the fluorescence of EYFP. The transition from bright to dim fluorescence occurs over a particular concentration range of calcium. Your goal today is to propose a mutation (actually, two) that will shift the concentration range over which IPC fluorescence decreases. Specifically, you will modify the calcium sensor portion of inverse pericam in a manner that is likely to increase or decrease its affinity for calcium ion.

In order to make reasonable modifications to inverse pericam, we will use several protein analysis tools. Proteins are modular materials that may be described and examined at multiple levels of a structural hierarchy (from primary to quaternary in the classical paradigm). Primary structure refers to a protein’s amino acid sequence, which might reveal a cluster of charged residues, say, or a pattern of alternating polar and nonpolar residues. One cannot predict the conformation of a protein merely from its linear sequence, however, due to rotational flexibility of bonds and non-covalent interactions between non-adjacent amino acids (as well as covalent disulfide bonds).

Physical methods used to interrogate 3D protein structure include X-ray diffraction (XRD), electron microscopy, and nuclear magnetic resonance (NMR) spectroscopy. The paper by Zhang et al. that you will refer to today describes the decoding of calmodulin’s structure using NMR, which depends on subjecting molecules to electromagnetic fields and analyzing the resulting energy absorption spectra of their nuclei. Scientists who elucidate protein structures, in addition to publishing their results, will often add them to public databases such as the Protein Data Bank (PDB). Because many proteins have structural motifs in common (e.g., alpha helices and beta sheets at the secondary level, or leucine-rich repeats at the tertiary level), which ultimately arise from their amino acid sequence, such databases can be useful for making predictions about proteins with known amino acid sequences but unknown structures. Today we will use a computer program that harnesses information in the Protein Data Bank to display interactive 3D models.

After examining both two- and three-dimensional protein information, you will propose two mutations to the wild-type inverse pericam protein, and finally design primers for incorporating these modifications at the genetic level.

Perhaps nothing is so conducive to a feeling of intimate familiarity with a protein as studying it at the amino acid level (primary structure). For the first part of lab today, you will dissect a two-dimensional representation of inverse pericam into its component parts. Begin by downloading this document, which contains the DNA and amino acid sequences of inverse pericam (IPC). You will annotate these sequences to guide your design work. 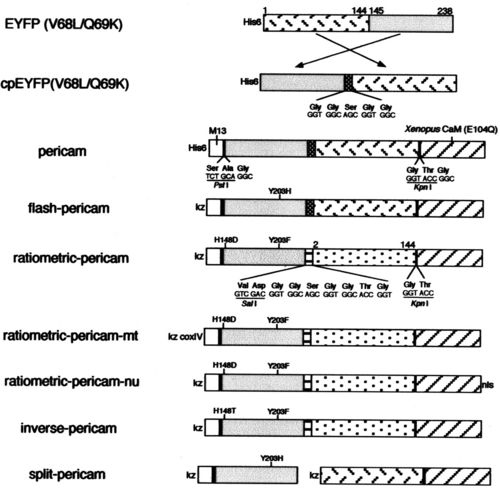 Unless we are precocious bioengineers indeed, looking at the amino acid sequence alone is unlikely to tell us too much about the protein. We might be left wondering where the chromophore (colour-forming portion) is located in EYFP, or where the binding sites for M13 and for calcium ions are located in calmodulin. You will use a tool called Protein Explorer to examine some of these questions. Your work will also be informed by the primary literature. Let’s begin there.

Print out your annotated document and hang on to it for reference. Now let’s put some visuals to all those letters!

You will now integrate the information you learned about calmodulin’s binding sites at the structural and residue levels. Decide on two modifications that might plausibly increase or decrease CaM’s affinity for calcium, and briefly state your hypothesis for the effect of each mutation in your notebook. To simplify your primer design, please just choose one residue to modify, but make two independent changes to it. Part of your writing assignment for this module will involve describing your design process and reasoning more fully.

In Module 1, you designed primers for creating a 32bp deletion in a GFP plasmid. Primer design for site-directed mutagenesis is in one respect more simple than in the previous exercise: both primers will be directed at the same location on each strand, and thus will be precisely complementary. You should also heed the following design guidelines:

Once you have chosen your mutation site, you might begin by writing out the codon of interest. Next consider the options for coding a new amino acid. Finally, you might pick the codon that incurs the fewest point mutations. An example is outlined below.

Residue 64 of calmodulin is tyrosine, encoded by TAC. To change to asparagine, one might choose GAU or GAC. Since GAC requires only one mutation (rather than two for GAU), we choose this codon. Ultimately, your primer might look like the following, which has a Tm of almost 81, and a G/C content of ~40%.

When you are done, remember to reverse your second primer so it reads 5’-3’ (for ease of ordering).