Today you will use one tool, a DNA microarray, to simultaneously examine the expression of many genes. DNA microarrays are slides with DNA sequences spotted in a known order on the surface. A variety of techniques are used to manufacture DNA arrays, including robotic arms that spot the DNA onto the slides' surface and photolithography to build the oligos on the slides one base at a time. Each spot of DNA is smaller than the period at the end of this sentence and yet gets a unique address on the slide surface, the identity and location of which is stored in the computerized “design file” for the array. The slide shown below is the same size as the one you’ll use (1 x 3 inches) but yours will have 4 arrays of 44,000K spots instead of the 250 spots shown!

For this example, let's give the normal cells the green dye (Cy3) and the cancerous cells the red (Cy5). The two colored samples are mixed and then simultaneously hybridized to a DNA microarray. The DNA spotted on the surface of the slide is in vast excess to either colored cDNA sample and so the intensity of each color will vary with the amount of RNA originally present in each sample. A gene expressed similarly in normal and cancerous cells, like the housekeeping GAPD gene, will give rise to a yellow spot in Row 6 Position 30 since equal amounts of green and red cDNA will be bound there and the merged color will appear yellow. By contrast, only red cDNA will bind at Row 4 Position 10 since cancerous cells express telomerase and normal cells do not. 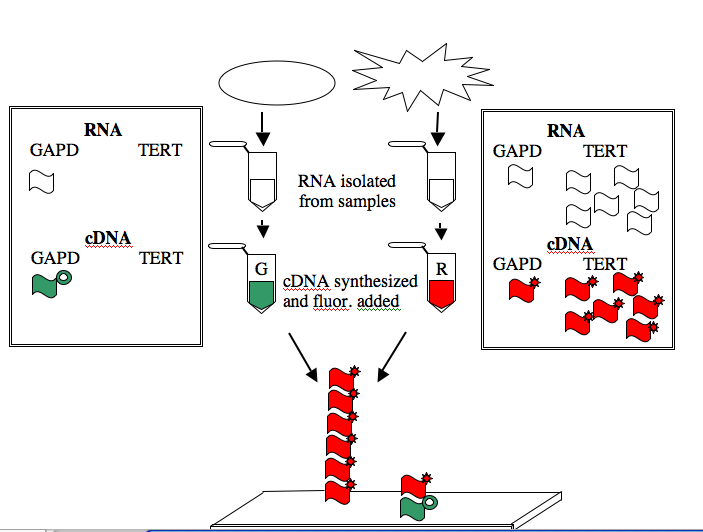 Today you will convert the RNA isolated from your yeast cells into cDNA and hybridize the cDNA to a DNA microarray. 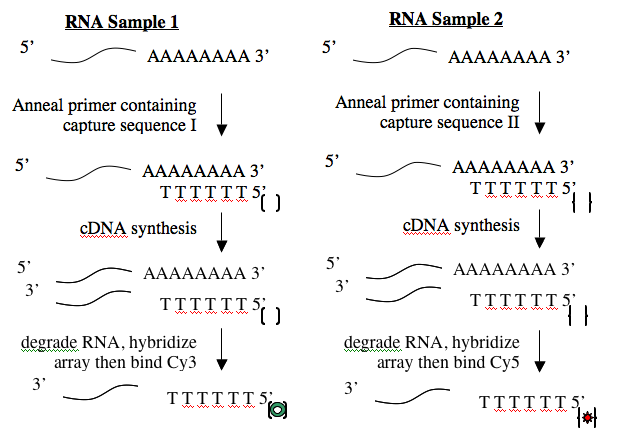 Calculate the volume needed for 2 ug of each RNA sample, then assemble the annealing reactions in RNase-free eppendorf tubes according to the following table. If you need more than 10 ul for 2 ug of RNA then you should calculate the mass in 10 ul of the more dilute sample and match that mass for the more concentrated sample. You cannot put a volume of RNA greater than 10 ul in the tubes.

Data for these exercises should be downloaded from this link.

Begin with the sheet called “Sample Data” which contains all the data for 21 of the 22,000 spots on the tested array. This sheet will familiarize you with the headings and entries you can expect to see when you examine your own data. Some important landmarks are

The arrays we will use are the yeast v2 DNA microarrays from Agilent. Each slide has four arrays, each with 44,000 60-mer oligonucleotides. These “oligos” were first built on glass wafers and then printed onto the slide surface. The oligos represent more than 6000 yeast genes, each spotted in multiple places on the array.

Finish Materials and Methods for lab report. These will not be collected but doing so now will keep you on track for writing the report that will be due in one week. You should remind yourself of the requirements for this section by reviewing the general guidelines that are here.