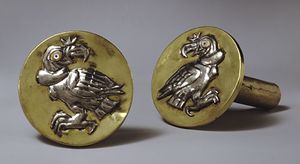 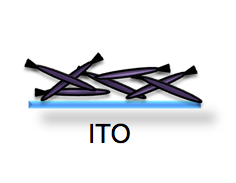 Today you will start to assemble your electrochromic device by electrodepositing IrO2 nanowires that formed on the specialize M13 phage. The IrO2 wires have a slight negative charge. Consequently they can be directed toward the patterned ITO slide if the slide is attached to the positive terminal of a power supply. The circuit is completed by attaching a platinum mesh to the ground terminal of a power supply. After this deposition, you will have a tangle of nanowires adhering to the areas of your slide that were not etched away last time. Next time you will finish building the electrochromic device, adding the Li+-layer of electrolytes and a second, unpatterned ITO slide to serve as the other conductive surface. A preview of the assembled ECD is found here

The strains you transformed last time with M13K07 and M13.1 were inoculated into LB+Kan and grown overnight. If the two forms of the phage are equally robust, then the phage titer in the liquid surrounding the cells should be approximately the same. Ditto if the wild type strain, MG1655, and the MDS strain are equally capable of phage production. You will compare the PFU/ul of each culture to determine if this is true. The titering protocol is identical to the one from module 1. Since you don't know if the phage production will be improved or diminished by any of the variations, you will titer a wider-than-usual range of concentrations.

You should also include a no phage control plate for confidence that the number of plaques you see next time arise as a result of your experiment. 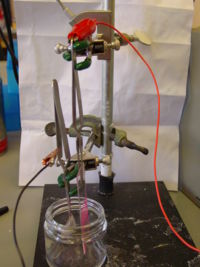 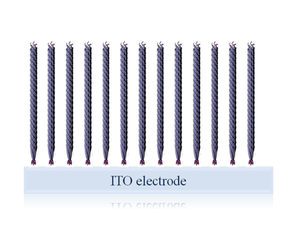