Zotero is an opensource citation manager that works from within your browser or as a standalone software. It stores both scientific papers as well as web pages in a database with the possibility of PDF attachments. The local bibliography can be synced and shared. Using plugins references can be inserted into word processors to generate bibliographies. 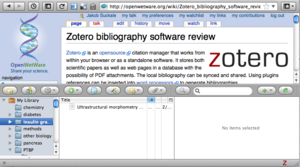 An example of Zotero working from within the browser. It is opened and closed like a drawer from the bottom of the window.

Zotero is a reference and citation database extension to your browser. In the past Zotero worked only with Firefox but integration with Chrome and Safari has been announced for the version 3.0 beta [1] in 2011. With the same release, a standalone version of Zotero was also included [2].

The database uses translators to collect the typical information of scientific papers directly from the web pages of common databases like PubMed and Google Scholar. Items in your local database can be synced with the Zotero server for free up to a storage limit which is not easily reached with the few bytes of text required for each reference. Databases can also be shared via this server between colleagues and within labs both privately and publicly.

Zotero, as of 2011, works with Microsoft Word and OpenOffice via plugins to generate bibliographies according to various citation styles.

Zotero is being developed by a core team at the Center for History and New Media at George Mason University together with volunteers from all over the globe. Funding comes from the United States Institute of Museum and Library Services, the Andrew W. Mellon Foundation, and the Alfred P. Sloan Foundation. See also [3].