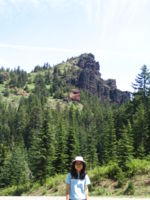 I am a graduate student in the University Program in Genetics and Genomics at Duke, advised by Dr. John Willis (Duke) and Dr. John Kelly (University of Kansas). I am interested in complex trait variation and evolution.

I work mostly on a population of Mimulus guttatus on Iron Mountain in the Oregon Cascades.

is an alpine meadow of about 1200 sq ft, at elevation 4000 feet off a wildflower hiking trail. The population census is in the hundreds of thousands, the monkeyflowers are annuals producing usually one fruit, there is a lot of micro-habitat variation in soil moisture and temperature, and the growing season is short and extreme - plants germinate under snow and die of dessication. Here are some pictures: 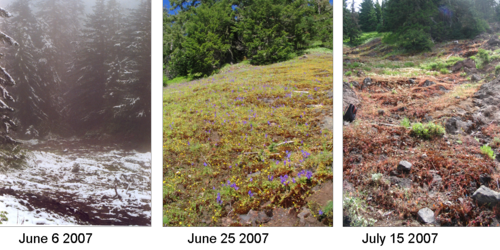 Floral variation within and among mimulus population and species

The focal trait is flower size.

Biometric tests (see Kelly and Willis 2001) have shown that much of the abundant standing variation for this trait in the Iron Mountain population is due to alleles at intermediate frequency. Flower size is genetically correlated with variation in pistil/anther and flower length (affecting mating strategy), flowering time (drought escape), water use efficiency (drought tolerance), as well as pollen number and seed set. Considering the heterogenous environment, a growing season demarcated by extremes in temperature and moisture, and extensive and variable pleiotropy, what maintains flower size variation at a given locus?

There is also a lot of variation in the same traits among the members of the Mimulus species complex, often correlated with differences in mating system (pictured at right). The system is ideal for an assessment of the relationship between standing variation and adaptive divergence.

I have generated 3 independent F2 mapping populations of large flowered individuals from Iron Mountain crossed to small flowered individuals, sample size 400 each. I have completed linkage maps of 150-180 markers for each population and measured 11 traits: flower size and other floral morphology traits, flowering time, leaf width, and fertililty components such as seed set, pollen viability, and pollen number. The goal of this study is to describe the genetic architecture of flower size & floral morphology traits, compare the latter with that of fertility components, and show the degree to which morphological variation in floral traits is a pleiotropic consequence of unconditionally deleterious mutations affecting fertility. Two papers are in prep from this work, one focusing on the genetic architecture of standing variation for floral and life history traits and another on the genetic architecture of inbreeding depression. 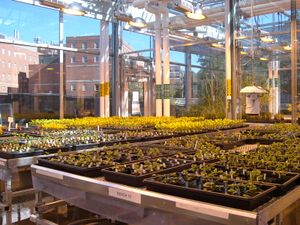 Simultaneously I have introgressed the same F1 alleles into a common background (IM62, an Iron Mountain inbred line) and generated 4th generation near-isogenic lines (NILs) in a breeding design that combined phenotypic selection with backcrossing. Though a large undertaking, this NIL generation approach allowed us to relatively quickly and cheaply screen up to four alleles at each QTL locus for effect size and consistency in the cloning genetic background.

I have confirmed the effects of many of the same flower size QTLs mapped in the F2 genome scan in the NILs by phenotyping BC4F2s. By phenotyping BC4F3 progeny, I have successfully pegged 3 QTLs (mapped in both the F2 populations as well as the NILs) to scaffolds in the 7x build of the Mimulus genome. Recombination rates are quite high in these QTL regions (50-100 kB per cM), facilitating cloning efforts. Current finemapping resolution ranges at 200-900 kb depending on locus and recombinant progeny testing in additional BC4F4 and BC4F5 populations is projected to rapidly narrow the region down to a target of 50 kB, after which I will move to an LD mapping approach to define the alleles using an existing panel of 200 randomly extracted Iron Mountain inbred lines. Identification of the segregating units underlying flower size QTLs will enable us to connect sequence variants to the observed aspects of genetic architecture for this evolutionarily labile trait. It will also allow us to look directly at allele dynamics of flower size alleles in the source site as well as test for molecular signatures of selection.

I am also doing a comparison of the genetic architecture of the same set of floral morphology traits across three levels of divergence - within population (Iron Mountain annual guttatus), between ecogeographic races (perennial and annual guttatus), and between species (M. nasutus and annual M. guttatus)