Perry and I transformed the DH5alpha competent cells with pCMV-Tag2a vectors. DH5alpha cells were used because they have higher efficiency in transformation. We placed 50 uL of DH5 alpha cells with 1 uL of the pCMV-Tag2A vectors (which was a 1 uL/uL stock) into a 1.5 mL eppendorf tube. This was repeated for a second transformation (2 pCMV parallel transformations were performed). For the positive control, 2.5 uL of pUC19 was placed into a 1.5 mL eppendorf tube along with 50 uL of DH5alpha competent cells. These cells were placed on ice for 30 minutes. Subsequently, we heat shocked the cells at 42 degrees Celsius for 25 seconds then placed them on ice for 2 additional minutes. SOC medium was incubated and 950 uL were added to each eppendorf tube. The tubes were then placed into the shaker (225 rpm, 37 degrees celsius) for an hour. The protocol used modeled that obtained from the DH5 product information sheet).

We then transformed TOP10 competent cells with hD1g-cloned Topo vectors: SG25, SG35, and F11. We diluted the stock vector 1:10. 5 uL of each of the necessary vectors were added to separate tubes of TOP10 competent cells. 2.5 uL pUC19 was added to one tube of top10 cells to serve as the positive control. Nothing was added to the tube of competent cells - this served as the negative control. The tubes were set on ice for 30 minutes, heat shocked for 25 seconds, set on ice for another 2 minutes, and then placed in the shaker for an hour (225 rpm at 37 degrees Celsius). Perry plated the transformations.

Protocol used for the second step was one i wrote up from mcb100 (included below):

1) Grab an ice bucket and fill it with ice.

2) Obtain 2 tubes from the "One Shot Top 10: Chemically Competent Cells" box found in the bottom shelf of the upper -80 Degree Celsius Freezer.

4) Pipet 10 - 15 microliters of cells from the purple capped vial into each eppendorf tube.

7) Place the tubes in the heat plate at 42 degrees Celsius for 30 seconds (Set a timer).

8) Place the tubes back in the ice bucket for 2 minutes (set timer).

11) Obtain 3 Amp resistant petri plates (found in the back refrigerator of the other lab room). Label the plates with (+), (-), and LIG.

12) Obtain the 3 incubated vials from the other room. Get glass beads from the back shelf by the window.

13) Pipet the fluid from each vial into their respective petri plates (pipet onto the center of the plate).

14) Pour a few (approximately 10 beads) onto each plate. Cap the plates and shake them side to side [avoid shaking them in a circular manner because this will cause a higher concentration of bacteria to end up in the center of the plate. You want them to be spread out as evenly as possible). Place the used beads in a small beaker, rinse, and place them in the dirty equipment tub for cleaning.

15) Cover the plates and place them in the incubator overnight.

The innoculation yielded very little pellet, thus, we made a Starter culture for pCMV and SG25. 3 mL of LB media was used for each labeled Falcon tube. We placed 1.8 uL of KAN in the pCMV tube and 1.0 uL of Amp in the SG25 tube. A sterile loop was used (note: yellow rods, found in the other room, can be used in place of the sterile loops) to pick a colony from the pCMV transformation plate. The sterile loop end was swooshed in the tube. 10 mL of the SG25 glycerol was added to the respective eppendorf tube. Both tubes were placed in the 37 degree celsius, 225 rpm shaker. The QIAGEN Plasmid Purification Handbook (p.20) states that the incubation period should last 8 hours.

Note to self: for the innoculation, use the LB medium located on the back (far right) shelf (the terrific broth was contaminated).

The innoculations yielded substantial pellets. Alain spun down the pellets and I performed the midiprep.

2) resuspend the bacterial pellet in 4 mL Buffer P1 (use the vortex machine to break up the pellet. Then transfer the pellet to a smaller centrifugation tube (the one we used in mcb100 - clear/transparent tubes)

5) Centrifuge at 13,000 rpm at 30 minutes at 4 degrees Celsius. Remove supernatant. (note to self: mark the edge of the tube which will be facing up in the centrifuge - just so that you can locate the pellet with greater ease later in the procedure).

6) In the meantime, equilibrate the QIAGEN-tip 100 (found in the Midiprep kit) by applying 4 mL of QBT buffer to each column. (i used 4, there is also a new rack - transparent blue - that nullifies the need to set up separate racks - found in room 5088)

7) Apply the supernatant from the centrifugation step to the QIAGEN-tip. After it has flowed through, wash the QIAGEN-tip with 2 X 10 mL QC buffer (also found in the midiprep kit)

8) Get a new set of centrifugation tubes - the clear, opaque ones. Elute the DNA into these tubes with 5 mL QF Buffer.

9) Precipitate the DNA by adding 3.5 mL room temp. isopropanol to the eluted DNA. Mix and centrifuge at 11,000 rpm for 30 minutes at 4 degrees Celsius. Decant the supernatant.

Performed nanodrops for each of the construct midipreps. Two samples were measured for each midiprep. The results are as follows:

Also, Alain showed me how to use the new PCR machine located in room 5096. We programmed "BB2" which stands for BioBricks 2, a simplification due to the inefficiencies of the machine in typing in letters.

The program consists of the following steps:

Functions of the machine:

I diluted the SG25 and F11 in a 1:100 proportion and performed a 1:10 dilution of SG35 (as a result of the aforementioned concentrations obtained for the different constructs.

2. Apply the sample to a QIAquick spin column and centrifuge at 13000 rpm for 1 min. discard flow-through.

4. place each column in a clean/new 1.5 mL eppendorf tube. Elute with 30 uL dH2O, let the column stand for 1 minute, centrifuge for 1 minute.

1) Get the necessary number of tubes (in this case 4 tubes) of Chemically Competent Top10 Cells, place on ice (for use in transformation).

4) Incubate the tubes at room temperature for 5 minutes

5) set on ice then procede to transformation

For the transformation: i followed the proctocol above (taken from my old mcb100 wiki page)

- the transformations that I performed last night did not yield any colonies. There seemed to be a weird bumpy lawn of (something) on the agar; however, they were not colonies.

- Thus, i performed ran an e-gel of the purified PCR DNA (using 10 uL dna and 10 uL water for each well sample). The e-gel showed that there were DNA bands in all expected lanes for the roughly the expected band lengths. The bands however, seemed a bit light/dull.

- Perry performed the cloning, transformation, and purification of parts 5 through 9. Two parts were successful, he re-PCR'd the other 3 parts.

- Performed another TOPO cloning procedure on Parts 1 through 4. I included a positive control (using pUC 19 cells that were located in the -80 freezer) as well as a negative control (with nuclease free water).

- Performed a transformation on the 6 samples.

The well contents from left to right: 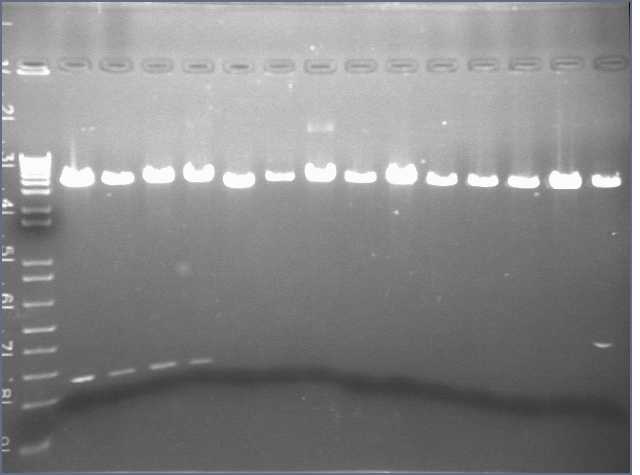 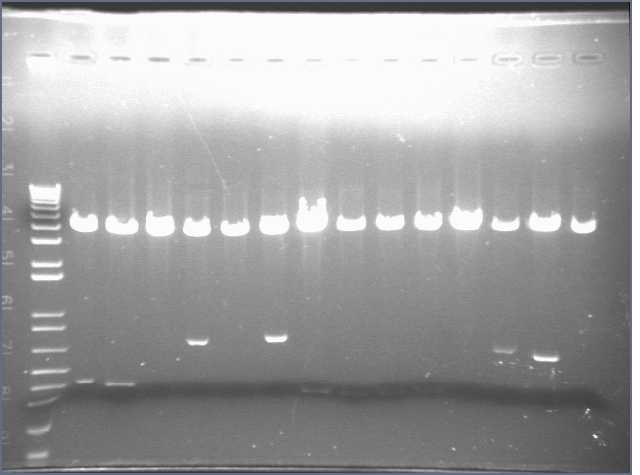 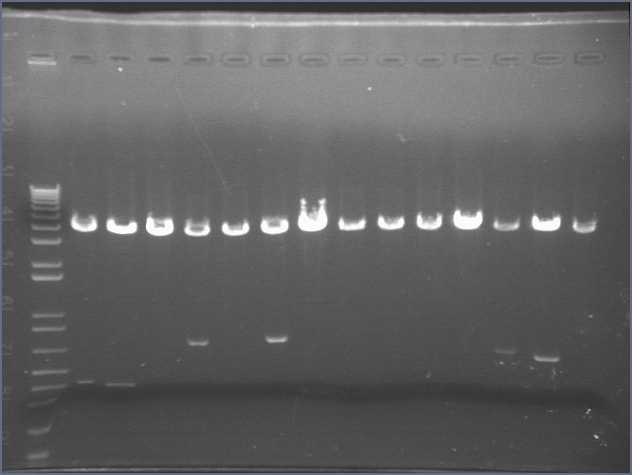 As a result, I performed a PCR reaction for parts 2, 3, and 5. I ran a gel of the PCR products, however this did not yield any results. Part 3 showed up faintly on the gel. Bands were absent for Parts 2 and 5. 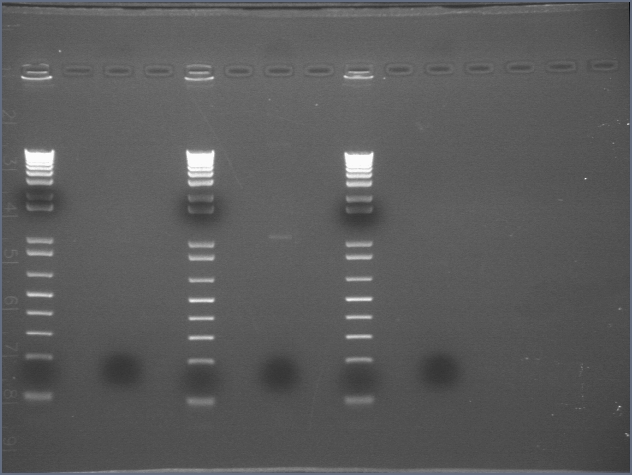 I discovered via email and re-examination of the pcr pictures that i was not supposed to pcr part 5 or innoculate part 5 for that matter.

Thus, as a result, i innoculated part 6. I chose 4 colonies, streaked, and innoculated them.

I reperformed the PCR reactions for Parts 2, 3, and 6 using program BB3. Let the reaction run overnight.

Back from spring break!

Performed an innoculation for BB3 (from the streaked plate). Sequences BB3 and BB4 were both accurate.

Next step: - run gels of the digests (mini and midipreps digests); the digests for the midipreps should be gel excised, miniprep digests can be run through an egel. - midiprep of BB3

- perry ran two gels of the digests performed yesterday. We took pictures of the results and excised the bands.

- performed a gel extraction of the isolated gel pieces - stored in my box.

- made a glycerol stock of the the BB3 linker (with DH5alpha). Took the 2 mL innoculation and split it into two 1.5 mL tubes (1.0 mL of innoculation per tube), spun these down, and added 400 uL of 20% glycerol/LB to each tube

- we ran the digests from saturday. Some of the bands blurred into adjacent bands. - Perry performed a second digest. The gel pictures indicated that i had used too much DNA (used 10 uL of the midi when i probably should have used the 1:10 dilution of the midi).

- made and ran a gel of all the digests from yesterday. - gel isolated the fragments - performed a gel extraction

- performed a restriction digest (PstI on the BB3 part that had been singly digested with SpeI) - prepared a double digest with EcoRI and SpeI (used EcoRI buffer); both digests were set at 37 degrees celsius for 4 hours -treated each of the tubes of BB3 with CIP (placed it in the PCR machine for 1 hour at 37 degrees - program DIGEST) - made and ran a gel of the BB3 samples (picture to come) -gel isolated the pieces

- performed a gel extraction of all BB3 gel samples (4 gels total) - performed a ligation of P1 and BB3; stored in the refrigerator - attempted to make a gel but took out the comb too early so the gel wells collapsed... making and running the P1 (delta E1/S1) digest gel tomorrow.

- made and ran a gel for P1 digest (delta E1/S1); no results - the gel was blank... - reperformed digests for P1 with the following enzyme pairings: Xba1/PstI or EcoRI/SpeI.

- made and ran a gel of the overnight digests - gel isolated and extracted the pieces - ligated the following together: