One of the first attempts to predict RNA secondary structure was made by Ruth Nussinov and co-workers who used dynamic programming method for maximising the number of base-pairs [1]. However, there are several issues with this approach, most importantly the solution is not unique. Nussinov et al published an adaptation of their approach to use a simple nearest-neighbour energy model in 1980 [2]. Michael Zuker and Patrick Stiegler in 1981 proposed using a slightly refined dynamic programming approach that models nearest neighbour energy interactions that directly incorporates stacking into the prediction [3]. The energies that are minimized by the recursion are derived from empirical calorimetric experiments, the most up-to-date parameters were published in 1999 [4]. There has been recent progress in estimating "energy" parameters directly from known structures[5]. Another approach researchers are using is to sample structures from the Boltzmann ensemble [6, 7].

One of the issues when predicting RNA secondary structure is that the standard recursions (eg. Nussinov/Zuker-Stiegler) exclude pseudoknots. Elena Rivas and Sean Eddy published a dynamic programming algorithm that could handle pseudoknots [8]. However, the time and memory requirements of the method are prohibitive. This has prompted several researches to implement versions of the algorithm that restrict the classes of pseudoknots, resulting in gains in performance.

Another issue when predicting RNA secondary structure is the absence of the non-canonical base pairing interactions, such as AA, AC, AG, CC, CU, etc. In order to remedy this problem, Parisien and Major proposed a radically different approach where 19 fundamental nucleotide cyclic motifs are systematically assigned and scored, rather than the classical tandems of base pairs [9]. 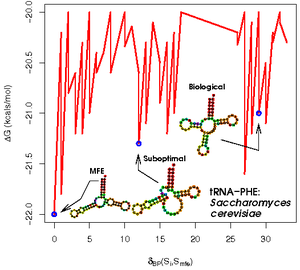 Frequently researchers have more than one RNA sequence which they suspect are homologous (or analogous) and therefore may share a common structure. There are three main approaches to this problem: 1. alignment folding. 2. simultaneous alignment and folding. 3. aligning secondary structures.