Figure 1. Blood vascular network in the human head. The human face, particularly the area around the lips, contains a dense array of capillaries [1].

Vascularization is the development of vascular networks within an engineered tissue once it is implanted and able to interact with a host’s tissue [2]. Capillary formation may take up to several weeks, depending on the thickness of this tissue. This is because the vascular interactions from the host are only able to penetrate several tenths of a micrometer through the tissue per day [2]. The main challenge of vascularization is providing an immediate blood supply to engineered vascular tissues implanted into a host. Methods to improve the mass transfer characteristics of this tissue are currently being developed, which would allow rapid oxygen and nutrient diffusion throughout the engineered tissue. Capillaries are typically 100-200 µm away from the cells, allowing for easy transfer of oxygen and nutrients to the cells [2][3]. For more complex tissues that exceed 200 µm in thickness and are highly vascularized, such as heart, brain, bone, and liver tissues, vascularization becomes a much more difficult task for these systems are much thicker and metabolically complicated [4]. This poses major diffusion limitations in regards to getting necessary nutrients to the cells in the hypoxic centers of these scaffolds that can be centimeters away from a potential supply source [5]. Additional methods for the diffusion and transfer of oxygen and nutrients in thick constructs are required [4]. Strategies to improve the vascularization of these thick implants include: scaffold design, angiogenic factor delivery, as well as prevascularization.

The need for advances in tissue engineering is crucial in order to meet the demands of patients requiring organ transplants and tissue repair. Organ donations are extremely limited, but they are the most ideal form of treatment because they are typically fully functional once implanted into a host [4]. These transplanted organs already consist of integrated vascular networks, which can easily diffuse into the patient once they interact with one another. Tissue engineering techniques are limited when it comes to the formation of vascular networks in engineered tissue. Advanced approaches to vascularize tissue are essential in order to maintain the vitality and functionality of the implanted cells [6].

One of the easiest designed strategies of vascularization is the use of engineered scaffolds to implant tissues [2]. Pore construction of the scaffold is essential for vessel diffusion. A pore size greater 250 µm has shown to increase the rate of vessel diffusion of the tissue [2]. In addition to pore size, pores must also be connected in a way to permit cell mobility to promote vessel transmission [2]. Fabrication techniques such as gas foaming, phase separation, freeze drying, and particulate leaching have been used to produce pores in scaffolds. Difficulty persists in pore construction because of the randomness of formation [2]. For this reason, solid free-form fabrication systems, such as rapid prototyping and electrospinning, are being studied to design better scaffolds for vascularization.

A multicomponent scaffold produced using the solvent casting particulate leaching technique resulted in the formation fully integrated host vasculature in the scaffold in vivo [7]. Researchers compared two scaffolds—poly(D,L-lactic acid) (PDLLA) salt-leached sponge with and without fibroin fibers—for microstructure, mechanical properties, endothelial cell colonization as well as vascularization of acellular constructs in vivo [7]. It is important to note that the silk fibroin fibers were randomly distributed in the PDLLA and that the pore size as well as the porosity was very similar for the two scaffolds. PDLLA was specifically designed to provide a perfect 3D porous as support [7]. Silk fibroin fibers were selected for their ability to support endothelial cell attachment and growth as well produce pro-angiogenic molecules as it degrades [7]. Female Sprague Dawley rats, 9-10 week old, received four randomized dorsal subcutaneous implants [7]. Figure 2 shows the vascularization of the scaffolds 3 and 6 weeks after implantation. Results showed that the incorporation of silk fibroin fibers led to a greater vascular volume after 3 weeks, but no significant difference from the PDLLA scaffold after 6 weeks [7]. Scaffolds with silk fibroin fiber were also shown to have some level of organization; this will help in to guide the formation of blood vessels in the scaffold.

A radial lactate-releasing scaffold, prepared by electrospinning, promoted complete vascularization of the scaffold and sustained neurogenesis, which is the formation of neurons from neural stem cells and progenitor [8]. Scaffolds were made of poly-L/DL lactic acid (PLDLLA) and were electrospun into sheets 238 + 18 μm thick—both random and aligned scaffold sheets were made. One mm3 cavities were made at the right somatosensory cortex of four-day-old mice and the scaffolds were implanted. Results showed aligned PLDLLA scaffolds achieved complete vascularization, while the random scaffold had poor vascularization [8]. The files below show reconstruction of the vascularization inside an aligned fiber scaffold (Mmc3), intact contralateral cortex (Mmc4), and non-aligned scaffold (Mmc5) 1 year after implantation.

Tissues engineered in vitro are cultured in controlled environments allowing oxygen and nutrients to be transferred within the tissue, but problems begin once the tissue is implanted into the host because of diffusion limitations [2]. To overcome these limitations, angiogenic factors can be incorporated into scaffolds with engineered tissues to assist in the diffusion process to promote vessel production. Growth factors such as vascular endothelial growth factor (VEGF), basic fibroblast growth factor (bFGF), and platelet-derived growth factor (PDGF) may be used to increase angiogenesis—this is the formation of new blood vessels from pre-existing ones— as well as stabilize the new vessels [3]. When multiple growth factors are combined in a scaffold, the formation of blood vessels is increased. For example, when VEGF and PDGF are coupled in a scaffold, VEGF is released rapidly while PDGF is released slowly and more uniformly [3] because of their varying stimulation levels in the blood vessel [2]. Growth factors show great promise for vascularization, but if added in excess, they may be toxic to the tissue and blood vessels. Tissues containing a high concentration of growth factors may lead to vessel leakage and may even cause hypotension [2]. 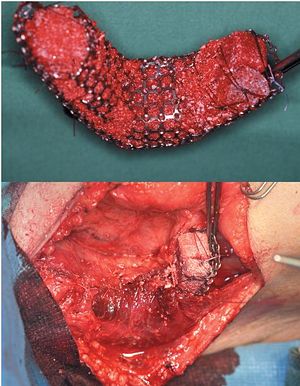 The premise of the ‘flap pre-fabrication’ method is to implant the tissue engineered construct into a highly vascularized region in vivo to favor blood vessel growth and then subsequently remove and implant it at the site of the bone defect [5]. One prominent study in this field occurred when a 56-year old man who had received tumor surgery eight years earlier was seeking reconstruction of his mandible. The bone defect was greater than 7 cm and the man’s head and neck region had been severely compromised due to previous radiation treatment. To prevent the development of donor-site bone defect, the researchers decided to grow a subtotal replacement mandible inside his latissimus muscle. The goal was to use the muscle vasculature to promote angiogenesis prior to the implantation of the graft to the bone defect location. The researchers used a titanium mesh scaffold that was formed to the shape of the defect and coated with isolate BMP9, bovine collagen type I, and bone marrow to serve as an undifferentiated target for recombinant human BMP7 (see Figure 3). The scaffold was then implanted into the latissimus muscle and can be seen in Figure 4 three weeks post-implantation. The scaffold remained in the muscle for 7 weeks, at which time it was removed and relocated to the region of the bone defect. Figure 5 shows the CT scan of the patient three weeks after his final operation. The patient claims that he can happily eat sausage now and believes it is a nice addition to his previous soup and bean diet. However, this process is highly individualistic, costly, time consuming, and long-term studies have yet to be carried out causing the quest for viable vascularization options to continue [9]. 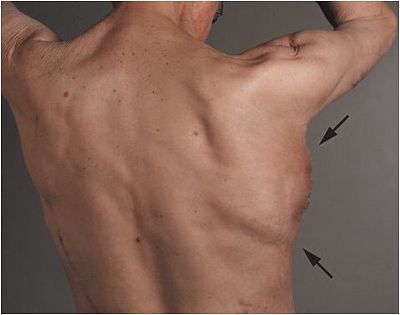 Figure 5.CT scan of patient 7 weeks after the construct was relocated to bone defect [9].

Cell sheet engineering is a multi-step process requiring multiple surgeries, but once these tissues are implanted into a host, blood vessels are able to immediately integrate throughout it (see Figure 6)[2][3]. A study conducted in rats showed a successful in vivo vascularization process [3][10]. First, an 80 µm thick cell sheet tissue is implanted directly onto a healthy site in the host [3]. The advantage of using in vivo systems is that blood can be supplied to the implanted tissue by the host [2]. Vascular networks formed within the tissue in 1-3 days [3]. With the successful network organization, additional cell sheet layers can then be added to this tissue on the rat over time [3]. Depending on the thickness of the desired tissue, development of vascular tissue can take several weeks [3]. Once the thick tissue has completely vascularized, it is then removed from this healthy site of the host and transplanted onto the damaged site. The implanted tissue is immediately able to integrate its capillary network with the host capillary network throughout the entire engineered tissue [3], which is the main advantage of this strategy. 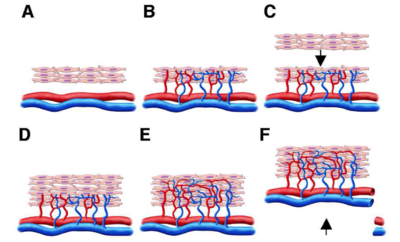 Figure 6. Schematic illustration of the concept used for bioengineering multilayer grafts with surgically connectable vessels. A) First graft is transplanted over a surgically accessible artery and vein. B) In this case, the graft is supplied with both new vasculature and blood directly from these existing vessels. C, D) After sufficient vascularization has occurred, second graft is transplanted onto the first graft. E, F) Finally, the microvascularized construct accompanied by graftable vessels harvested from the host is fully perfused by host vessels and surgically resected [11].

One of the most promising methods for attaining successful in vivo responses is by pre-vascularizing the scaffolding material. Levenberg is a pioneer in this field as he has extensively evaluated the effects of different cell lines on scaffolding materials and their respective differentiation processes. One of his most influential studies in the field pertained to his analysis of the effect of preseeding materials with myoblasts and endothelial cells in the presence and absence of embryonic fibroblasts. In his initial co-culture experiments he used just myoblasts and endothelial cells and found that the endothelial cells spontaneously organized into tubular structures within 3D scaffolds enhancing the vascularization capabilities. However, his most significant finding came with respect to his tri-culture experiments where he added fibroblasts to the mix and found significantly increased vessel density. This supports the hypothesis that smooth muscle cells may not only provide physical support for angiogenesis, but may also release growth factors to promote the process. As can be seen in Figure 4, the addition of embryonic fibroblasts facilitated the stabilization of the vessels over time. The fibroblasts that were seeded in the cultures were stained smooth muscle actin positive suggesting effective differentiation. Levenberg than evaluated the clinical potential of his method by developing a 3D scaffold system and subjected it to several in vivo mammalian systems. The researchers wanted to characterize the survival, differentiation, and vascularization capabilities of the material in the more complex atmosphere. They performed studies where they subcutaneously implanted the scaffold into the backs of immunodepressed mice, into the intramuscular regimes of the quadriceps of nude rats, and replaced an anterior abdominal muscle segment of nude mice with the construct. All three systems continued to differentiate in vivo and took on the desired elongated, multi-nucleated morphology. In efforts to further evaluate the success of the vascularization procedure, the researchers used a luciferase-based imaging system. In this application, the introduced the fluorescent luciferase proteins into the intravenous system to evaluate the resulting fluorescence over time (see Figures 7 & 8). This experiment was based on the fact that a highly vascularized region would be indicated by a more intense signal. 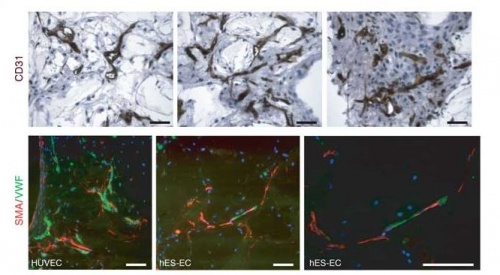 There are still many obstacles to overcome in the field of vascularization in thick tissues. Advanced methods to promote vascular tissue are still being researched. The combination of already developed methods may be a promising approach to promote vascular formation [1]. Also, in addition to engineering the speed of vessel development, the quality of the vessels should also be taken into consideration [1]. Improved vessel formation may enhance the development of vascular networks in the tissues. Clinical trials have shown some positive results, but a great deal of research still remains [5].