Multiplexing is often used to convert multiple analog or digital input signals through common transmission lines to output. A multiplexer is a device consisting of a combinational logic circuit that switches a particular input to a common output using a control signal. Multiplexers are rapidly changing rotary switches that connect multiple different input channels to an output line one at a time.

The first transistors, introduced in the 1900s, were initially made of vacuum tubes. They were large and cumbersome to be integrated into circuits such that typically less than 10000 transistors can fit on a chip. However, in 1947, Dr. John Bardeen, Dr. Walter Houser Brattain, and Dr. William Bradford Shockley, Jr. invented the first germanium based semiconductor transistor, which is considered a remarkable breakthrough in the development of solid-state electronic devices. The widespread use of semiconductor transistors led a revolution in the electronics industry, further giving rise to LSI (large-scale integration) and VLSI (very large scale integration). Nowadays a VSLI chip can go up to 10 billion transistors with feature size smaller than 15 nm[1].

Similar to an electronic chip, with the increasing density of chambers on microfluidic chips, the number of micromechanical valves needed to manage them can easily go as high as hundreds and thousands. The operational cost of building and integrating thousands of connecting tubes could become quite expensive. Moreover, such complex circuits could be very difficult to scale up. Not to mention, troubleshooting a problem with thousands of valves and connections would be extremely time-taking and inefficient. A valve multiplexing system similar to electronic integrated circuits is developed to allow complex fluidic functions with a minimal number of inputs. Valve multiplexing has many biological applications such as biomolecular separations, enzymatic assays, polymerase chain reactions. All of these applications are a scaled-down version of current technology in the form of an integrated circuit. Mass production via scaling down is a relatively new idea and it posed a great many advantages by saving expense, space, and labor[2].

Microfluidic multiplexors are combinatorial arrays of binary valve patterns that reduce the number of inputs, and thus increasing the processing power of a network. A multiplexor is analogous to a binary tree in which n fluid channels can be controlled with only [math]2log_2n[/math] control channels. The power of such a binary network is evident in the fact that 1024 flow channels can be controlled by only 20 control channels.

As shown in figure 2, the grey lines are input lines all connected to one output. The colorful multiplexing lines are hydraulically actuated to control which input lines makes it to the output. Valves form at the intersection of the wide part of the multiplexing lines with flow lines because it requires higher pressure to actuate thinner line than thicker. The actuation pressure applied is high enough to deflect wide part but it is too low for thinner lines to actuate. In order to select a particular channel, a combination of open and closed valves based on the binary system is employed. Each pair of multiplexing lines are arranged in the form a bit with an alternating pattern of thicker and thinner parts as shown in the figure. For example, a binary combination of 011 has to be selected to connect only channel 3 to the output. Actuating multiplexing line corresponding to bit3 = 0 closes off input lines 4-7, bit2 = 1 closes off lines 0 and 1, and bit1 = 1 finally closes off line 2 leaving only channel 3 open.

Thorsen et al. developed multiplexors containing two distinct layers, control, and flow layers. The control layer consists of all the channels responsible for actuating valves, and it is located on top of the flow layer, which involves a network of channels being controlled. Fluid manipulations and biological assays are performed in the flow layer. The intersection of a control channel and flow channel creates a valve in which the thin membrane between the two channels can deviate through hydraulic actuation[1]. This approach is applicable to any pneumatically controlled valve regardless of its position, top, or bottom layer[2]. 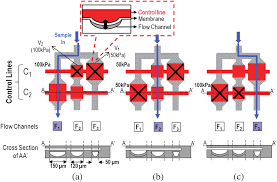 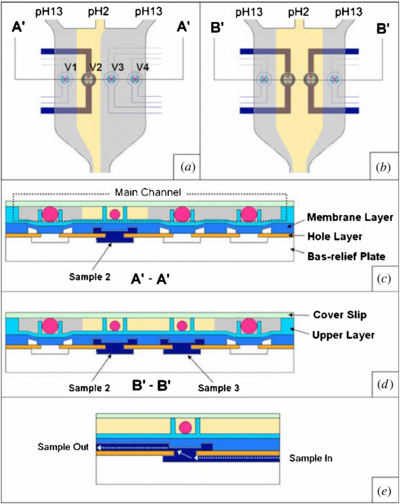 The actuation of pneumatic valves involves the use of bulky pumps and electronic apparatus, and to overcome this problem Lee et al. proposed a pH actuated valves. The team has developed a microvalve array based on pH-responsive hydrogel beads that are controlled by the laminar streams of multiphase pH solutions. The device consists of four layers: upper layer, membrane layer, hole layer, and bas-relief layer. The upper layer consists of the main channel where staged hydrogel beads are controlled by pH buffers. There are two main buffers of pH 2 (yellow) and pH 13 (grey) used. The beads expand in basic solution and impose pressure on the membrane layer that closes the hole. However, in acidic solution, the bead contracts preventing the membrane layer from sulking. The hole is open and the sample flows through the hole layer as shown in the figure. The opening and closing of particular valves are executed by controlling the flow rate of the pH solution. Since the laminar flow is maintained, both buffers flow next to each other without mixing. As shown in the figure, at a low flow rate the acidic buffer flows only through one lane, however with an increase in the flow rate the adjacent lane is also covered with acidic buffer[4]. 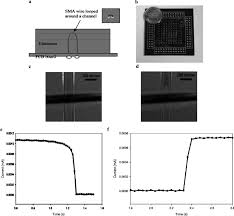 Difficulty with the shrinking of pneumatic solenoids, tubing, and mechanical pins is an impedance to the development in miniaturization of microfluidic circuits. Shape memory alloys (SMA) are a material that can be deformed at a low temperature but when heated it returns to its original shape. Vyawahare et al. combined SMA with multilayer soft lithography to integrate microfluidic elements like valves, pumps, multiplexers, etc at a smaller order of magnitude. As shown in the figure, an SMA wire is wrapped around the flow channel and soldered to a PCB board embedded in PDMS. The wire is heated resistively by applying the current which causes the wire to contract and squeeze the channel shut[5]. 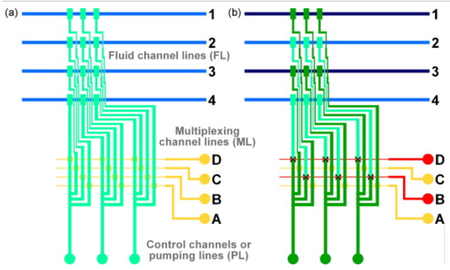