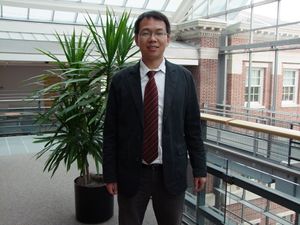 I am a postdoctoral research associate in Stephanopoulos group at Massachusetts Institute of Technology.

Peng Xu, Ph.D., received his B.S. degree in biological engineering and M.S. degree in biochemical engineering from Jiangnan University (Wuxi, China). After that, he worked two years as a full-time instructor and researcher in Dalian Polytechnic University, where he lectured courses and conducted research on bioprocess and fermentation engineering. He then joined to the graduate program of Chemical and Biological engineering, the State University of New York at Buffalo. In January of 2011, he moved to the Chemical engineering department of Rensselaer Polytechnic Institute to continue his Ph.D. work. His Ph.D. project is mainly focused on the development of synthetic biology tools that support the design, construction and optimization of metabolic pathways. After completion of his Ph.D. degree, he moved to his current position as a postdoctoral research associate in the Department of Chemical Engineering, MIT, where he works on improving lipid biofuel production from Yarrowia lipolytica. Peng’s research work has led to 13 peer-reviewed scientific articles. He was awarded the Danisco Scholarship for Excellent Students in Biotechnology in 2006 and Chinese Government Scholarship for Outstanding Students Studying Abroad in 2012.