From OpenWetWare
< User:Yeem‎ | BE.180 notes
Jump to navigationJump to search

Comparison of Python and Biology

Recall that for an example of a genetic device, we spent a bunch of time making genetically encoded inverters, where one protein controls the operator of another protein. (see figure) 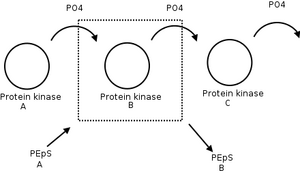 How can you fix it?

Goal: can you describe a biological function that you can use without worrying about the details?

DNA to RNA to Protein

If you had the coding region of a particular open reading frame, and you found that there was a restriction site in the middle of it, you could remove it by specifying the same amino acid with a different nucleotide sequence.

See other notes for more info