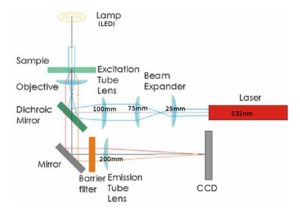 Figure 1. Our microscope design, borrowed from the lab manual. Focal lengths as indicated.

I worked on this module with Sophia Kamran. We have uploaded our MAT files and m-files.

Due to the brightness of our laser, we were forced to use a polarizer to reduce the intensity of the excitation light sufficiently to avoid saturating the detector. After taking our rhoadmine distribution, the 4um spheres were so bright that dividing out the rhodamine distribution had no effect on our processed image. The before and after images were nearly identical.

Cytochalasin D is a potent inhibitor of actin polymerization. Cyto D binds to the ends of actin filaments, blocking the addition of actin monomers. Cells treated with cyto D are unable to rearrange their actin cytoskeletons, preventing movement and other functions. These cells eventually fall apart.

In our experiments, we observed less filamentous actin in cells treated with cyto D. Whereas the untreated images contain large amounts of wispy, elongated actin, the fibroblasts incubated with cyto D appeared contracted. Treated 3T3 cells were also noticeably fewer in number, suggesting that some had undergone apoptosis. Those cells that remained either looked shriveled or exploded, depending on the imagination.

The images we took using fluorescence microscopy were very faint, perhaps because of photobleaching or incorrectly adjusting gain/exposure when capturing images. In many cases, we were unable to satisfactorily enhance our images in MATLAB, as increasing contrast was accompanied by increasing noise, and despeckling by a median filter blurred the image too much. We also used the GNU Image Manipulation Program (GIMP). 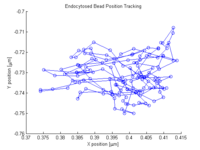 We used mostly self-authored code, except for generating our plots. These were performed using Heejin's code, albeit heavily modified. Our tracking script read individual frames of movies, preprocessed them by applying a Gaussian filter, and returned trajectories of specified beads. Calibration data for our microscope stability resulted in a mean squared displacement (MSD) of about 57 nm2.

Results
The movie for one of our cyto D treated cells was unusable due to apparent apoptosis of the cell over the course of recording. Another clearly showed shifting of beads within the cells visualized and returned an enormous MSD.

No definitive conclusions can be drawn from our experimental data; untreated and treated cells do not differ appreciably, given the sample space. The MSD of the treated cells is skewed by one sample approximating a parabola, indicative of drift. Upon further review we determined that the beads embedded in the cell in question do in fact move closer together; no set of two beads gave satisfactory data.

Theoretically, as the shear modulus G is a linear function of shear stress, we might have expected to see lower complex shear moduli in our treated 3T3 cells. As the cytochalasin inhibited actin polymerization and cytoskeletal rearrangement, it is possible that existing actin filaments could continue to depolymerize, thus resulting in reduced integrity of the cell.

We fully regret using preprocessing in our tracker code. Obtaining trajectories accounted for an estimated twelve hours in lab just waiting for scripts to finish. Estimates for single movie calculations run around forty minutes. The authors might have saved six or eight hours by simply disregarding the Gaussian filter.

Assembly of our microscope would have been impossible without the assistance of Jae Won. Countless times, we misaligned a mirror, or failed to properly collimate light emerging from our objective, and Jae Won always helped us correct the problem. We also wish to thank Steve because otherwise we would still be running our scripts right now.