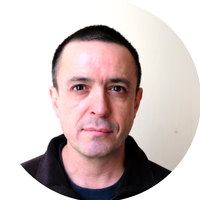 Translate to English and Spanish 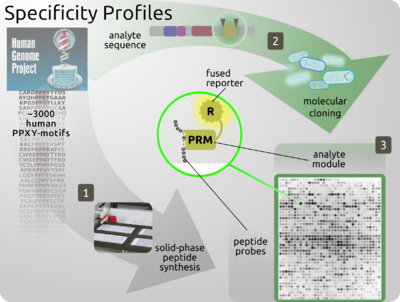 A basic strategy to estimate the specificity of the protein recognition events involved in cellular signaling consists in defining an in vitro context of an extensive number of probes to define the specificity of protein recognition as a profile of biochemical binding potential (inherent specificity) and validating selected potential inter-actors via pull-down and co-localization experiments (effective specificity)[1,2].
The modular analysis of specificity, i.e. focusing on interactions mediated by modules of protein structure[3,4], has been essential to our lab, allowing us to investigate the individual problems of several independent projects. The key point of this approach is the possibility to derive basic rules of peptide motif (PM) recognition in form of regular expressions characteristic for each peptide recognition module (PRM) family, with which matches in sequence databases can be searched.

In such cases we have strived a comprehensive[5,6], when not proteomic[7,8], profile of PMs recognized by individual or an homology family of PRMs. A specificity profile is firstly generated by establishing a collection of peptide probes, which represent matches of the regular expressions characteristic for a PRM family in a sequenced genome (Fig. 1, steps 1 and 2). High-throughput screening methods with a fluorescence scanner or a charge-coupled device camera can be applied to determine the capturing potential of each peptide probe for one or more analytes in a biological sample (Fig. 1, step 3). In this fashion, samples can be prepared with different PRMs and each sample can be profiled in terms of recognition specificity using an equal collection of probes[7,9]. Miniaturization of the assay platform or device, as with peptide micro-arrays, even allows simultaneous multiplex assays[10,11]. 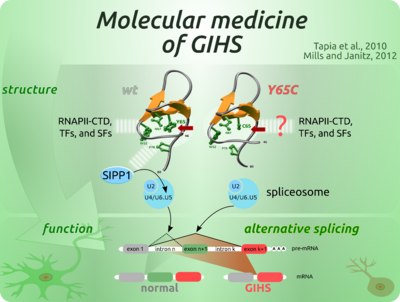 Beyond learning specific aspects of protein function through gene ontology enrichment analysis[12,13], specificity profiles may also be applied to explore sets of elementary rules that are used to generate short linear motifs and the globular fold patterns of non-catalytic protein domains we have been calling PMs and PRMs, respectively. Understanding such rules governing protein recognition enables the prediction of ligands of particular biotechnological interest[14–16] and develop ways to exclusively modulate particular cellular pathologies[17–21].

Most general lessons from work carried out to this date give the impression that founding paradigms of cellular signaling are abandoned. The observation that recognition events are of promiscuous nature has displaced the original notions of pathways built by highly specific binding between interacting partners[22].

Indeed, each protein recognition domain exists in the cell simultaneously with a battery of similar domains and a large repertoire of promiscuous short linear motifs. Moreover, the binding affinity of native interactions are mostly weak at middle micro-molar range and can not be easily distinguished from competing interactions excluded from the network supporting a particular cellular response[2]. 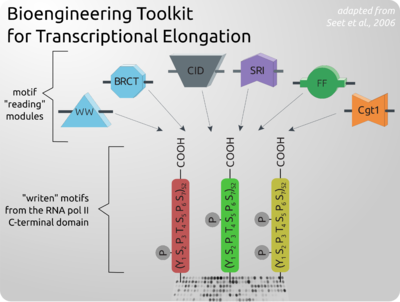 As a consequence cellular systems follow different strategies to regulate enzyme activity and evoke mutually exclusive cellular responses to different stimuli: (a) dynamic assembly of multi-protein complexes; (b) sub-cellular localization; and (c) temporal control. The modularity of protein structure is a well appreciated toolkit for biological engineers to address this matter in the context of synthetic biology or drug targeting[23–29].

As example one may consider modular allosteric regulation of the RNA pol II via its C-terminal domain (RPII-CTD) at the downstream end of signal transduction (Fig. 2). RPII-CTD is an unstructured tail fragment that is post-translationally modified by dedicated kinases[30,31]. These modifications are differentially recognized by a repertoire of PRMs across different homology families to regulate the activity of the multi-protein complex[32].

Thus this system provides a natural kit for bioengineers to design artificial combinations of enzymatic and other modules for cellular localization and temporal control of protein function.

Given knowledge of the recognition rules, these designed chimera can be combined to rewire the transcribing activity of RNA pol II[33]. The rules of binding recognition which need to be learned in order to account for effective specificity and mutually exclusive cellular responses go beyond visual strategies to describe the structure of compact recursive structural modules in proteins. They may more closely resemble rules for syntax, grammar, and semantics of human language[34–37].

Message in a Bottle 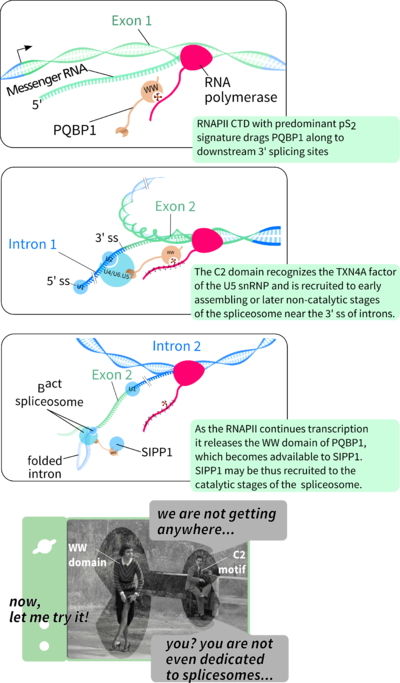 On a collaborative project concerning the role of PQBP1 in X-linked intellectual disability (X-LID), the inherent specificity of the wild-type and the Y65C-mutant PQBP1 WW were directly compared (Tapia et al., 2010). The collection of probes used to profile the linear motif recognition specificity contained a core repertoire of PPXY motifs and an additional tailor-made collection of non-PPXY potential ligands based on the literature. An independent comparison of the specificity of both WW versions was also carried out. Therein, the repertoire of probes represented a complete and redundant permutation of poS postitions in a sequence consensus of the CTD repeats in the human RNAPII (YS2PTS5PS-YS2PTS5PS).

Earlier reported interactions with phosphorylated CTD from RNAPII (Okazawa et al., 2002) and with SIPP1, a splicing factor interacting with Ser/Thr phosphatase-1 (PP1) protein (Llorian et al., 2005), were confirmed. Moreover, a comparison of wt and Y65C-mutant PQBP1 WW specificity profiles shows that the mutation, known to be associated with GIHS (Lubs et al., 2006), compromises the recognition of SIPP1. This effect was accordingly observed in cell extracts from HEK98 and lymphoblasts isolated from a GIHS patient (Figure 5A and B). Biophysical analysis of the mutation effect additionally showed a compromised thermal stability of the WW structure and reduced binding to SIPP1.

The consequences of the compromised PQBP1/SIPP1 complex was a significant reduction of pre-mRNA splicing, as shown in lymphoblasts derived from a GIHS patient. The decreased splicing efficiency was similar to that seen after small interfering RNA-mediated knockdown of PQBP1, indicating that PQBP1-Y65C is inactive in intact cells (Figure 5C-G). Moreover, Tapia et al. (2010) shows that the known WW-mediation of binding to RNAPII (Okazawa et al., 2002) depends on hyperphosphorylation of RNAPII's CTD. In the cell this is done by the pTEFb kinase complex, which thus imprints a post-translational marker for elongating RNAPII, known to recruit splicing factors (Batsché et al., 2006; Phatnani and Greenleaf, 2006). The orchestrating role of RNAPII in the cross-talk between transcription and splicing is well described (Bird et al., 2004; David and Manley, 2011; Neugebauer, 2002).

The diverse lesions in PQBP1 may lead to similar intelectual and morphological symptomes. Besides the Y65C point-mutation, all other X-LID associated PQBP1 mutation produce truncated proteins, which lack a C-terminal intrinsically unstructured domain known to bind the spliceosome assembling factor U5-15kDa. Such facts suggest that the WW domain of PQBP1 is sufficient to cause X-LID but not exclusively necessary as causative agent. It is posible that PQBP1 is firstly recruited by elongating RNAPII, then co-localizes to the assembling spliceosome through its C-terminal domain and, driven either by affinity or effective specificity, dynamic WW-mediated recognition may switch to SIPP1 binding to help activate the catalytic steps of pre-mRNA splicing. Alternatively, the role of RNAPII recognition may be secondary to the recognition of SIPP1, which has been shown to be shuttled to the nucleous independently from its own predicted nuclear localization signals, most possibly by PQBP1 (Llorian et al., 2005). Thus, under this model, PQBP1 functions as a scaffold between spliceosome assembly (C-terminal domain-mediated) and catalytic activity (WW-domain mediated).

This idea is apparently in paradox with the fact, that studies of PQBP1 involvement in intellectual disabilities using animal models show that Mus musculus and Drosophila melanogaster with knocked-down PQBP1 may be rescued from developing symptoms analogous to X-LID syndromes by applying HDAC inhibiting drugs (Ito et al., 2009; Tamura et al., 2010). Recent hypotheses of a cross-talk between chromatin remodelling and alternative splicing (Allemand et al., 2008) may shed some light on these findings. In the later citation, the authors are “tempted to speculate that the splicing machinery relies on chromatin regulators which are able to read the ‘histone code’ to locate and access pre-mRNAs awaiting splicing”. If they are given truth, the apparent paradox would turn to a further evidence.

Less conflictive are reports of PQBP1 transcription regulating activity through recognition of poly-Q expanded tracts in the transcription factors Brn-2 (Waragai et al., 1999) and ataxin-1 (Okazawa et al., 2002; Okuda et al., 2003). Indeed, SFs and TFs show common elements in their interaction networks and are oft erroneously categorized (Brès et al., 2005; Expert-Bezançon et al., 2002; Hastings et al., 2007). Poly-Q expanded ataxin-1 was shown to increases the affinity of the PQBP1-WW for the phosphorylated and active form of the RNAPII-CTD, leading to its dephosphorylation (Okazawa et al., 2002). Desphosphorylation on S2 and diffident reappearance of S5 phosphorylation on the CTD of eleongating RNAPII is known to slow down elongation rates and favor the recognition of weaker consensus sequences for splicing factor (de la Mata et al., 2003). Such situation favors the usage of alternative splicing patterns and the outcome of splicing variated gene products.

Thus, the empirical support for the involvement of PQBP1 in X-LID via alternative RNA splicing is found to fit and complement diverse empirical findings and theoretical postulates independently reported by different research laboratories.

Please take a look at the image to the right and set your mind for speculation. The image was produced in Inkscape using one of the wonderful SVG templates from Wikipedia User 'Kelvinsong'.

Sept. 2003 – June 2004 |
Diploma thesis in the Systems Immunology Lab led by Dr. M. Or-Guil at the Institute for theoretical Biology of the Humboldt Universität in collaboration with the Charité Universitätsklinikum, Berlin

Oct. 1998 – June 2004 |
Study of Biology with a Biochemistry major at the Humboldt Universität, Berlin

May 1996 – Sept. 1998 |
German as Foreign Language, German Literature and Philosophy, Epistemology, and Sociobiology as guest student at the RWTH, Aachen. 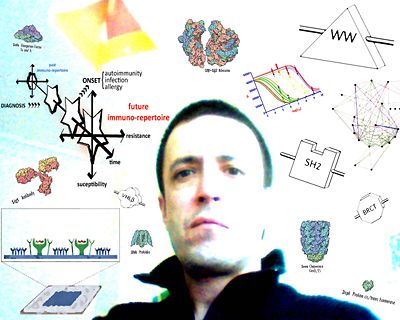 Are you also having trouble discussing COVID19 statistics? I hope this serves: