After reading there Image Models portion of their paper "Quantitative Comparison of Algorithms for Tracking Single Fluorescent Particles" I decided I should probably go back to the drawing board. I guess not completely since most of the ground work I can still use. But i'll follow their procedure. Make a super high res image first.

To do this like they did i gotta make the PSF then convolute it with the point source. For the high res image, it will have pixels as well. I'll go with each pixel being a nm. So 184.5 high-res-pixels = 1 camera pixel. That is super high res

I'm going with the rhodamine 6g dye is 10 nm large. but i don't know for sure.

Taking a 2-d convolution is tough. And in labview it is easiest handled through IMAQ software. So this is going slower than i thought initially but i am moving forward anyways.

I now have the convolution of the Airy Disc and a circle of radius 10. Here look at it: (remember this is a super high res image theoretically)

It just crashed. So you won't be seeing this till i rewrite it. Ok it wasn't that hard--fuck fuckity fuckster. I think it crashed because i wasn't closing out my IMAQ images. I have to keep an eye on that.

I am destroying the images just fine now so here is what i am talking about: 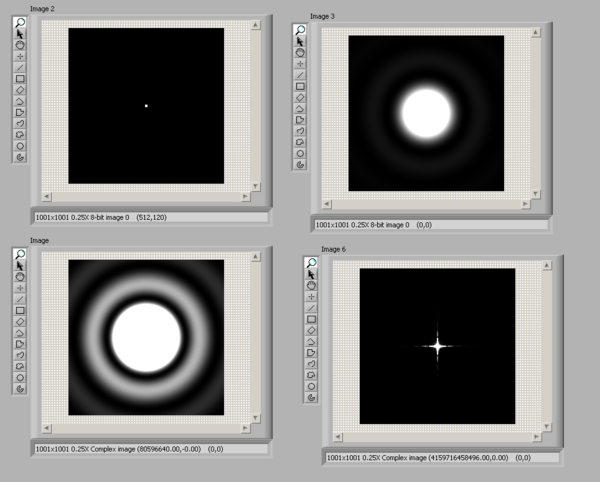 The top left is the 10 nm radius circle that represents the fluorophore. The fop right is the Airy Disc whose spread is set to our specifications in nm (prefactor is .015). The bottom right is the fourier transformed multiplication of the two images. And finally the image on the bottom left is the inverse Fourier transform of the multiplied images in Fourier space otherwise known as the convolution of the PSF and the dot.

After looking at these images it is clear to me that the convoluted image is an Airy Disc but scaled differently since the bugger is brighter than the original. Sweet. And this program is saved even better.'

Ok now i have a high resolution of what a spot looks like. now i have to integrate over the corresponding pixels in here to form a lower resolution image that matches what the CCD would see. I think integration would just be a sum, but we'll see. Actually i am curious what this does with a rectangle. So i am gonna take a side adventure and see. 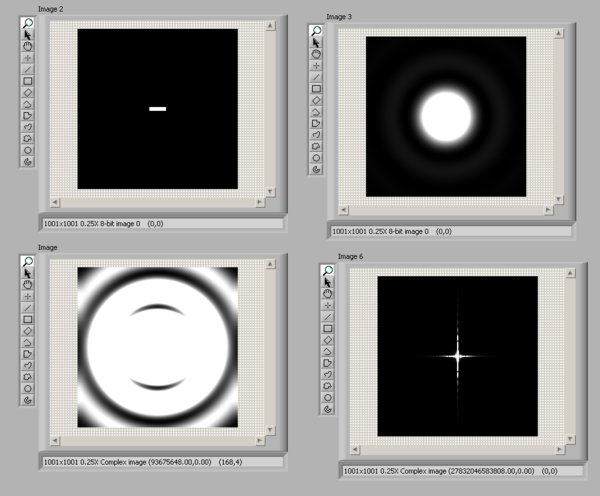 The intensities are off and probably overwhelming the rectangle, but this is the first look. I have to go to class so i can't play around 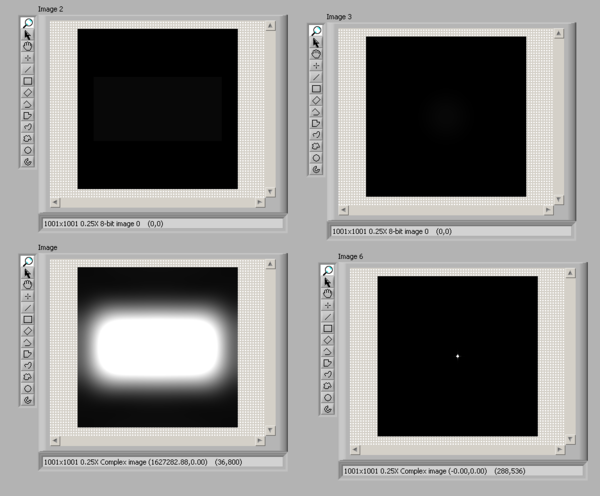 There is is prettier looking
Retrieved from "https://openwetware.org/mediawiki/index.php?title=User:TheLarry/Notebook/Larrys_Notebook/2009/11/17/Super_High_Res_Image&oldid=368067"