Steve Koch 14:57, 9 July 2009 (EDT): Checked again, and "Hold and Take Data" appears to work OK. Loop time remains constant (about 300-350 microseconds) during multiple runs. I do note, however, that the overall step time sometimes has a hickup--this would indicate a problem with the bit rollover or counter reading. So, this provides two clues to the problem with piezo loop time: 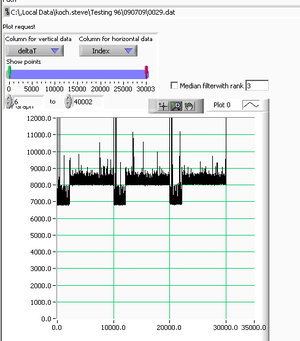 Steve Koch 15:57, 9 July 2009 (EDT): For massive legacy reasons, there is all kinds of conversion of real-life position units (microns) to MHz (AOD frequency) and bits (AOD frequency control bitfield). I definitely could clean all this up, but I'm worried about breaking data analysis (just like I was back in the heyday). There may be an intermediate thing I could do where I just hide MHz and bits from the user, but even that may take some time more than just dealing with it for now. I looked up the feedback sequence in my old "Daq08-koch-Popping_VC_BsoBI.ini" (http://kochlab.org/files/data/Koch_Data/Popping_VC_BsoBI)data. A lot of factoids came back to me from looking at it: 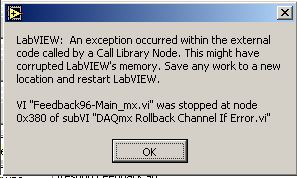 Steve Koch 15:59, 9 July 2009 (EDT): While looking into the above Piezo stuff, Feedback 96_mx spontaneously crashed. I believe the software was in the non-acquisition side of things. So, not sure which DLL would have been being accessed?

NI-DAQ LV: The specified device is not a National Instruments product, the driver does not support the device (for example, the driver was released before the device was supported), or the device has not been configured using the Measurement & Automation Explorer."