Steve Koch 22:58, 9 July 2009 (EDT): Even though we only had about an hour, Andy and I tried out some OT calibration. We were hindered by the power spectrum VI not working (I think this is because it uses traditional NI-DAQ stuff, which no longer works on this computer). However, I was pleasantly surprised that we got some things working with the Feedback 96 software. In fact, except for the memory leak (which I've now fixed), I think it worked very well at least as far as "position ramp piezo" is concerned. We achieved two things:

Andy made a nice dual stuck bead (4 M NaCl) / free bead (water) sample, which made this very convenient. I'll post some graphs below, but not sure if will do much analysis, since we can do things better tomorrow. It's also not clear yet whether we need to realign the tweezers after a mirror bump. Actually undoubtedly we do, but since we're trying for some preliminary data within one week, it may be more prudent to wait. Having the power spectrum would help. 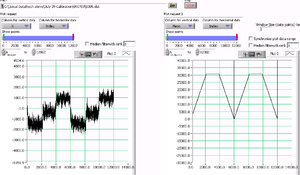 This is pretty cool! The graph on the right shows the piezo sensor. You can see that we maxxed out the travel, and thus that's why we see the three steps in the square wave (showing where "zero" force is).

Steve Koch 22:58, 9 July 2009 (EDT): We used "position ramp piezo" to drive the piezo first in one direction, and then in the other. This provided a nice detector signal. We did not loop the process, only back and forth one cycle.

Steve Koch 23:04, 9 July 2009 (EDT): We had trouble with some sliding of the sample (not sure why exactly) and also with knowing which way the piezo would sweep relative to the camera. Basicaly we were pretty rushed. SO, the first couple DOG tries, we missed the bead. The final file, when we decided to call it quits we put the laser right on top of the bead. Thus, you only get slightly more than half of the DOG on each side. With 5 more minutes, we could have easily done better, but it's enough to see that things are behaving as expected. 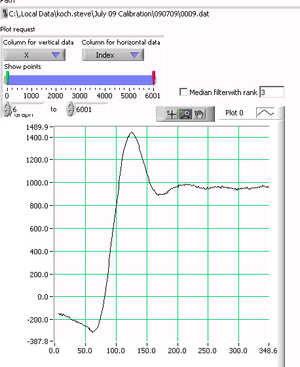 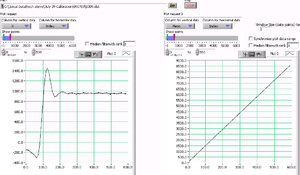 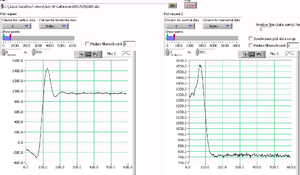 Same as previous, but showing Y signal instead of piezo. The Y has substantial signal, because the bead is not centered in Y. Ideally, not being centered, the Y should have a Gaussian-like signal (that is, symmetric). 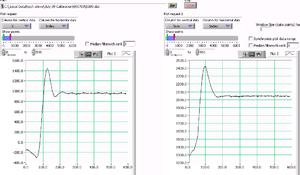 Showing sum signal as well. You can see that this looks a lot like the Y. I remembered that this QPD does not normalize by the sum, and thus X and Y will have substantial components of the sum signal. We should probably fix this hard-wired in the DAQ software, to make it like how it's set up (for the On-Trak amplifier, which did divide by sum). Also, this shows some serious cross-talk between the Sum and the bead deflection. We definitely need to look into this. It could mean the bead is too big for the detector, which is not difficult to change.

Above is shown the X signal along with Piezo and Y. To the right is shown the sum signal. Read the caption for description of problem.

Steve Koch 23:59, 9 July 2009 (EDT): Looking at file 0002, I modified simple plotter to extract a power spectrum (hard-coded the time step as 0.000350). I then wrote a quick VI to fit the power spectrum (deleting the two lowest frequency points first). Doing this, I get a corner frequency of about 75 Hz. My initial thinking is that this is very low, given the laser power we were using. But it's all so hastily done that no conclusions are probably good except to say it definitely looks like a trapped bead power spectrum. Cool! 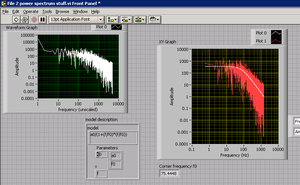 Steve Koch 01:07, 10 July 2009 (EDT): If I'm doing the quick calculation correctly, this would put the stiffness very low. Based on Richard's Master's thesis, I would have expected much higher corner frequency for the laser power we were inputting. This stiffness would be about .002 pN / nm:

Andy Maloney 02:15, 10 July 2009 (EDT): Would overfilling the back aperture help in making the stiffness too low? Also, would the fact that the QPD is overfilled do the same?

As of now, need global variable set to RSE for DAQ