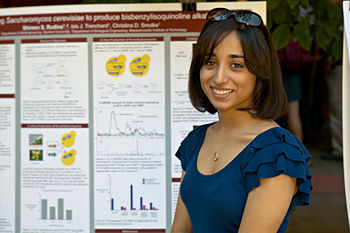 During the summer of 2012 and Feb-June 2013, I was a full-time Organism Engineering intern at Ginkgo Bioworks.

From Jan-Dec 2012, I worked Dr. Chris Voigt's lab at MIT with Felix Moser, where I was working on improving the dynamic range of sensors in genetic circuits through the use of plasmid copy number.

During the summer of 2011, I was an Amgen Scholar at Stanford University, and did research in Prof. Christina Smolke's lab with Isis Trenchard, working to engineer S. cerevisiae for the production of bisbenzylisoquinoline alkaloids.

I have also worked on developing a drug-eluting contact lens with Dr. Joe Ciolino in the Langer lab at MIT during January-August 2010.