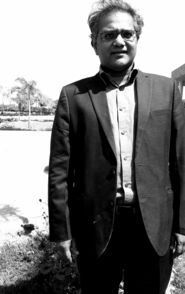 I studied linguistics at Jawaharlal Nehru University and functional neuroimaging at Institute of Nuclear Medicine and Allied Sciences. As a visiting scientist at the International Centre for Theoretical Physics, Trieste, I became interested in how the brain's electrical activity are coordinated, especially those that shape cognitive processes. The objectives of my research is to understand the human auditory system, the controlling mechanism of the neuron-astroyte-vasculature system (the basis of BOLD fMRI) as a systems-level control engineering problem, and what role genes play in these process. My work hopes to unravel brain-behavior relationships that shape the dynamics of speech and language, their interfaces with working memory and attention, and their genetic bases. The techniques that I employ involve electrophysiology, molecular biology as well as functional imaging at cellular and systems levels; this multimodal approach is what makes it all the more exciting. I am a member of the International Society for Cerebral Blood Flow and Metabolism and EU-India Grid.

As an affiliated Fellow at the Department of Neurology,Massachusetts General Hospital and Harvard Medical School, it has been my privilege to have worked with some of the leading neuroscientsists.

You can reach me at shantanu.g@srmap.ac.in.

The advent of functional magnetic resonance imaging (fMRI) has contributed enormously to our understanding of brain's response to cognitive activity. Our understanding of fMRI signals depends on how well we can model neurovascular coupling that is controlled by astrocytes and neurons exchanging chemical information to modulate each other’s response. A dynamic equilibrium among the various metabolites in the neuron-astrocyte system is maintained by a metabolic engine that involves sharing of metabolites between them in response to activity-dependent neurotransmitter release at synapses. The astrocytes provide by their extensive intercellular communication network through gap junction channels formed by connexins, an important physical link between the vasculature and activity at the synaptic terminals, which are crucial for understanding the brain’s vascular response in a variety of normal and compromised conditions.

Among the various metabolite cycles linking the signaling pathways responsible for metabolic support to active neuronal tissue involved in the neuron-astrocyte metabolic crosstalk (which includes the malate-aspartate cycle, the glutamate-glutamine cycle and the lactate shuttle), the lactate shuttle is particularly important, which transfers lactate from astrocytes to the energy-hungry neurons (also known as the astrocyte-neuron lactate shuttle, ANLS). It proposes that glutamate, released from neurons during synaptic activity, is taken up by astrocytes in a sodium-coupled process, and the ensuing sodium-dependent activation of the Na/K-ATPase triggers glucose uptake, resulting in the rapid formation and release of lactate from astrocytes. The primary purpose of such regulation is the homeostasis of the brain’s microenvironment, and is also central to the understanding of the hemodynamic response due to neuronal activation. Bidirectional neuron-astrocyte interactions are thus crucial for the function and survival of the central nervous system. The ANLS hypothesis also predicts that the rates of astrocytic glutamate cycling should be equal to the rate at which the metabolized glucose enters the neuronal tricarboxylic acid (TCA) cycle. However, there is no consensus about how and why anaerobic glucose metabolism in astrocytes accounts for most of the lactate supplied to the neurons. Consequently, the complex mechanisms that link energy metabolism to neuron-astrocyte signaling are poorly understood.

Our research focuses on the phenomenon that generates the functional hemodynamic signal, both as blood oxygen level-dependent (BOLD) and Arterial Spin Labeling (ASL), as a consequence of metabolic interaction between functionally active neurons and their associated astrocytes.

We are building a two-photon microscope to investigate neuronal plasticity in the auditory cortex.

Two-photon excitation (2PE) microscopy is a form of far-field microscopy with advantages over conventional confocal microscopy, because of deeper tissue penetration, efficient fluorescence detection and little photodamage. 2PE occurs when two photons of low energy can excite a fluorophore in a quantum event, resulting in the emission of a fluorescence photon, at a higher energy than either of the two excitatory photons. Since the probability of the near-simultaneous absorption of two photons is extremely low, a high energy beam is typically required, usually supplied by a modelocked femtosecond laser.

If you wish to contribute, please email me.