From OpenWetWare
< User:Riley G. Oshiro
Jump to navigationJump to search

'February 2, 2016: Dr. Bentley's comments on Lab Notebooks so far Riley, overall good work. You are thorough in your written descriptions and you are making sure to address all the red box comments. Keep it up! You need to make sure you are referring to the rubric for lab notebooks (on page 29-30 on your lab manual). You missed the aerial diagram and the set-up of the Hay Infusion. Also! Make sure that you are including a purpose, materials and methods, data and conclusions for each lab. You can integrate the red box comments, and the rubric elements into this format. You have until class on Thursday (2/2) to update your protists/algae lab notebook to receive full credit!

Purpose: To collect soil and plant samples from the transect in order to create a hay infusion. Materials: Mason Jar, soil and plant sample from transect, water, paper and pencil to record organic and inorganic elements of the transect. Methods: Select a transect and spend 30 minutes diagraming and documenting organic and inorganic elements of the transect. After observing the transect, return to the classroom and create a hay infusion by measuring out 10-12 grams of soil and ground vegitation and adding 500mL of deepark water. Att 0.1 grams of dried milk and mix for 10 seconds. Place the jar in the back of the room with the lid off to allow it to breathe. Data: Biotic Life: People: 4 Squirrels: 3 Dead ground bushes: dispersed towards western boundary Flowering shrubs: 4 Trees: 2 (1 dogwood, 1 oak) Little green plants: close to drain in the NW quadrant (small bushes, 2 types mixed in) Green bush: 1 Budding bulbs: more around the drain and also behind the bench to the West Dead bushes: behind North bench Ivy: on the ground at the Northern boundary Green leafy plant: 15 – East boundary Dead plants around the memorial rock: 6 Acorn hats: hundreds dispersed fairly evenly around the transect 1 dead rat deer poop

Abiotic Life: Frame over the pond Big rocks: 5 Medium stepping rocks: 51 Medium rocks around the pond 39 Little rocks in and around the pond: about 70 + 100 or more in the water Pond – partially iced over Duck sculptures – 11 Rock with in memory of written on it Runoff drain Mouse traps: 2 Certified wildlife habitat sign Benches – 3 Building at the border – roper hall Sprinkler head Gas/water pipes (sprinkler control?): 2 Conclusion: The plot has abundant plant variety and appears to see a good amount of foot traffic due to its placement next to a dorm. There were a few squirrels and deer poop but no evidence of birds or ducks. We think that the transect receives a fair amount of protection from the buildings surrounding it from elements such as wind and receives sunlight in the morning and around mid-day however, after that, the sun disappears behind the dorm at the Western boundary.

Purpose: Identify protists and algae living within the hay infusion. Materials: Hay infusion, slides and coverslips, microscope. Methods: First observe your hay infusion and record changes from the previous week including smell and appearance. Use a pipet to take samples from two niches in the hay infusion. Place a small drop of each sample on a slide and cover it with a cover slip. Examine the sample under the microscope and use a dichotomous key to determine the types of protists within the sample from each niche. Data: The smell of the hay infusion is scummy like pond water with something festering and moldy growing in it. There is a film of mold or fungus growing over the surface. It is mostly brownish green with some white flecks. After drawing samples from the top and bottom of the hay infusion and examining them under the microscope, we were able to use the dichotomous key to identify some of the organisms.

Top of Sample: Many Colpidium and Paramecium with a size of about 70mm. We also saw what could have been an Arcella, however all the organism's features were difficult to distinguish under the microscope. From our sample we can infer that there is most likely a high density of Colpidium and Paramecium living in the top section of the sample and that there is abundant bacteria and algae for these organisms to consume because they are both heterotrophs with an oral groove. This makes sense because there was such an abundance of bacteria, mold, and algae growing on the top of the hay infusion

Bottom of Sample: In the bottom of the sample we saw more Colpidium and Paramicium however, there was a greater variety of paramecium in these slides. We were able to identify Paramecium Aurelia, Paramecium Bursaria, and an unknown organism that was not on the dichotomous key but was about 140mm. None of these organisms were green which indicates that they are not photosynthesizing organisms. Conclusion: The needs of life on page 2 of the Freeman text are energy, cells, information, replication, and evolution. In our hay infusion we examined paramecium, a protist which meets all the criteria for life in the text book. Paramecium are heterotrophs that consume bacteria and algae to create energy, they are made up of cells and they have a dual nuclear apparatus one of which is in charge of processing information for expressing genes for everyday function. Paramecium replicate through asexual reproduction called binary fission. Evolution of this protist can be seen in the specialization of its organelles which are made up of cells and perform specific tasks within the paramecium. The species is consistently evolving based on its environment and ecosystem. 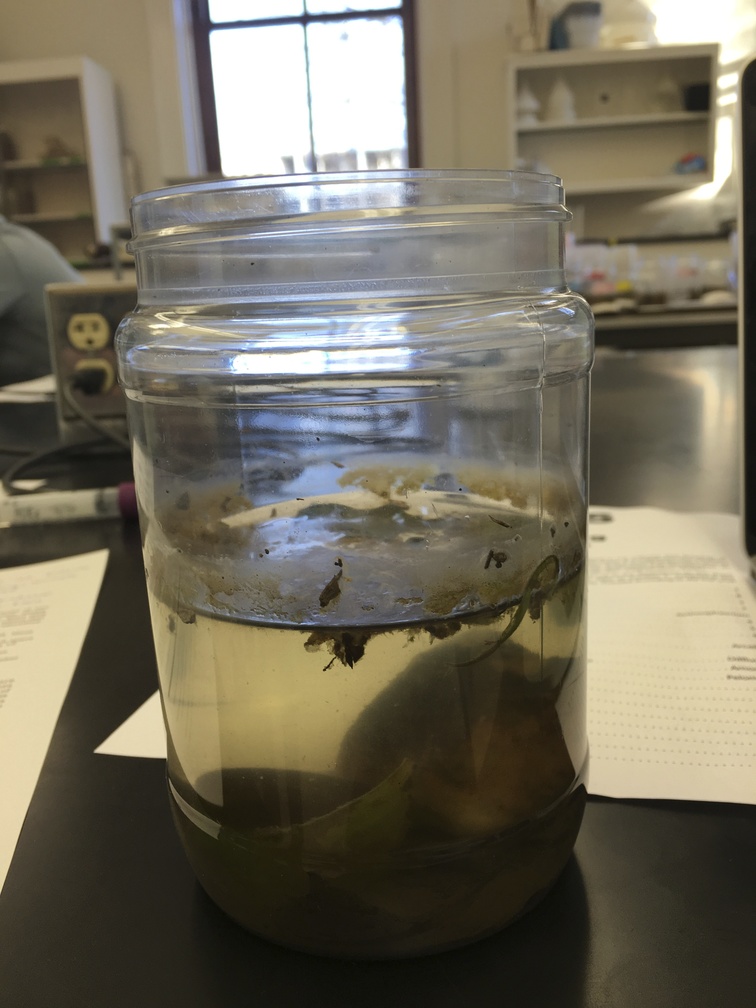 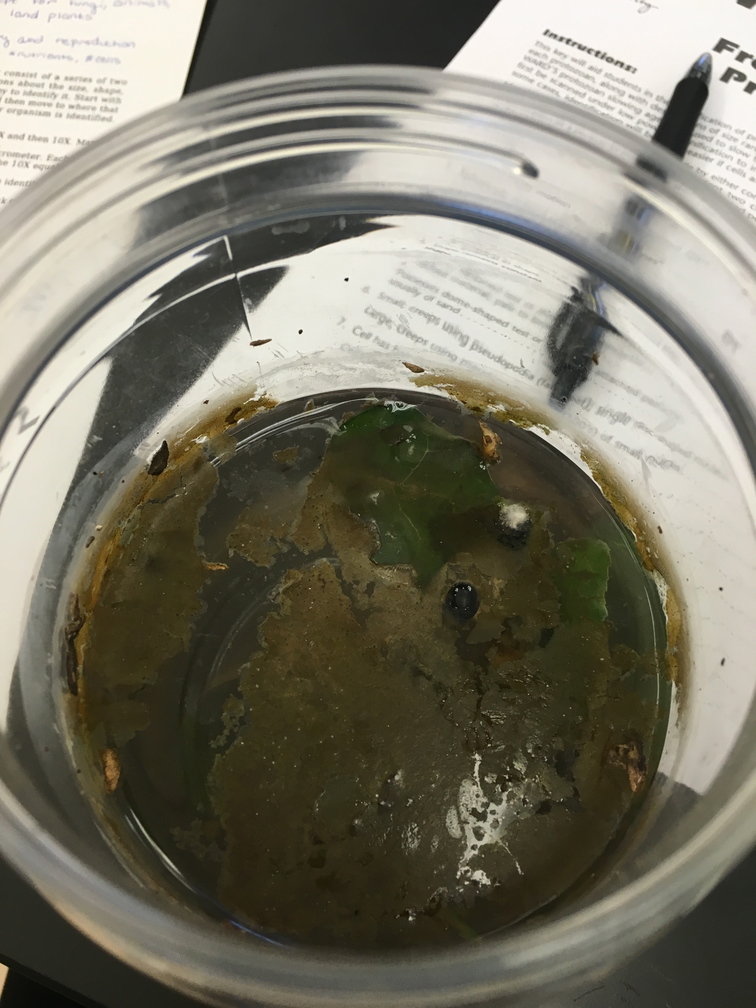 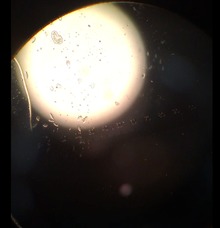 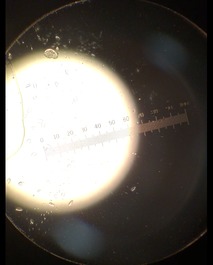 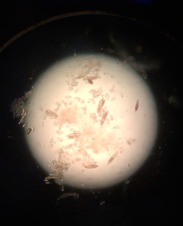 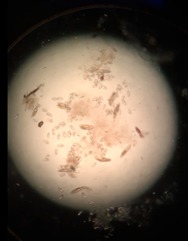 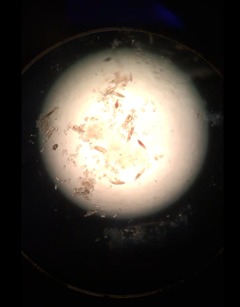 Purpose: The purpose of this lab was to quantify the number of bacteria in our hay infusions to give us an idea of the bacteria residing in our transect plot on American University's campus. Materials and Methods: We began by examining our previously plated agar plates for bacteria growth from last week. We counted the colonies as best we could comparing the nutrient agar without tetracycline to the plates with the added antibiotic. Next we chose 4 colonies to examine under the microscope and perform a gram stain on. In our lab we only had 3 plates with significant and interesting growth on them so after performing gram stains on 4 of them, we continued with only 3 colonies of bacteria. To examine the motility of the bacteria we made a wet mount by placing a small amount of bacteria on a slide and mixing it with a drop of water. To perform the gram stain, we followed the gram stain procedure and then categorized the colonies and cells. The last step of this lab was to set up the PCR amplification for the next lab which we did by taking a very small amount of two bacteria colonies and adding them to primers. Data: The hay infusion maintained its raw sewage smell and there is now fuzz hanging off from the bottom of the film covering the top of the infusion. There seem to be more particles floating in the middle section than there were before.

Conclusion The PCR amplifications were successful and we will be able to find out the type of bacteria in the next lab! We used tetracycline in this lab to see how it affected the bacteria growing on 4 of the agar plates. Tetracycline is an inexpensive antibiotic that are part of a family who's mechanism of action involves inhibiting protein synthesis by preventing the attachment of aminoacyl-tRNA to the ribosomal acceptor (A) site. Tetracycline exhibits activity against a broad spectrum of gram negative and gram positive bacteria as well as some organisms such as chlamydiae and a few protozoan parasites. Chopra, Ian. "Tetracycline Antibiotics: Mode of Action, Applications, Molecular Biology, and Epidemiology of Bacterial Resistance." NCIB. Microbiol Mol Biol Rev. 2001 Jun; 65(2): 232–260.

Introduction: The purpose of this lab was to identify and locate the plants and fungi within the transect in order to understand the ecosystem. In order to do this we visited the transect and photographed it as a whole to determine any new features since the last time we visited. After this we selected five representative samples of plant life from the transect. This included budding flowers, plants growing close to the ground, and lichen found on a tree branch and on rocks. Additionally, a bag of leaves was taken as a sample to collect from in the next lab.

Conclusion In this lab we were able to examine the vascular structures of many different plants from our transect and identify them as monocot or dicot. In particular we were able to examine the lichen under a dissecting scope. Lichen is a type of fungi that has a symbiotic relationship with its host. Fungi produce sporangium which are important because of the role they play in reproduction. Sporangium can produce spores by mitosis but most commonly are the site of meiosis. Additionally, after dissecting a bud under the microscope, all of the internal reproductive structures were visible and it was easy to distinguish the various appendages.

Purpose: The purpose of this lab was to identify the invertebrates and possible vertebrates collected from the transect samples.

Materials and Methods: A berlese funnel apparatus was set up with a 500mg leaf sample from the transect. The leaves were placed on top of mesh netting in a funnel and connected to a flask containing ethanol. The contraption was then placed under a lightbulb where it sat for a week. The invertebrates shy away from the light and end up falling into the flask where they are then preserved. Samples from the flask and transect were observed under a dissection scope.

Data Five invertebrates were identified from the transect sample: spider(arthropod), springtail(arthropod), mite(arthropod), ant(arthropod), and bark lice(arthropod). Perhaps the most interesting sample was the Springtail which took a little while to identify. Springtails are quite common especially after heavy snowfall which had occurred the week the sample was procured.

Conclusion There were a large range of sizes of organisms in the transect. The largest was a spider and the smallest was a springtail. This sample illuminated the diversity of invertebrates and insects that aren't necessarily visible with the naked eye but are intrinsic parts of the transect. All of the organisms were small arthropods (from the kingdom arthropoda) meaning that they were invertebrates with bilateral symmetry. Unfortunately, another lab group stole this group's intended sample so there is a possibility that this sample did not actually come from Transect 2, the site which this lab group is studying. This could potentially be a source of error in the results because the organisms examined might not be representative of the actual transect.

Purpose The purpose of this two week lab was to examine the effects of Focalin on the development of Zebrafish.

Methods and Materials 36 zebrafish embryos were selected and each was placed in an individual well. There was a control group, a group that received a 20mg concentration of Focalin and a group dosed with 40 mg of Focalin. The Focalin concentration was created by dissolving the contents of the capsule in water in order to dilute it.

Data Nearly all of the embryos were around 15 to 17 hours of development. The initial lab was performed on a Thursday and all that ended up hatching had done so by Monday. By the 7th day of the experiment developmental difference were observed. The zebrafish in the 40mg concentration did not react in the same mannerism as the controls. Additionally, many of them began to die by day 10. The 40mg group developed a heart arrhythmia observed by making a wet mount of the fish.