YAHOO…..YA…BA…DA…DOOOOO……..Today I made a major breakthrough in Tweezers alignment: First I was able to align the HE-NE with IR, second I invented a super easy way (Two End Apertures Thread Alignment TEATA)with web cams, to do it. It is so easy that it is almost boring. Now we are able to align telescope, periscope mirrors, steer assembly and objective with HE-NE, while IR sitting right on the top. 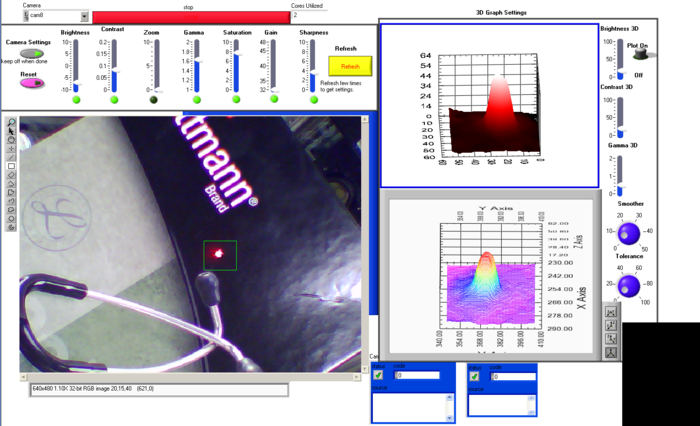 I wrote a software in LabVIEW called Laser alignment 3D. This software can be used with any USB camera for onsite indirect or direct viewing of laser beams. The 3D graph help to align and overlap the two beams (in this case He-Ne and IR).

The set-up for TEATA is as follows: 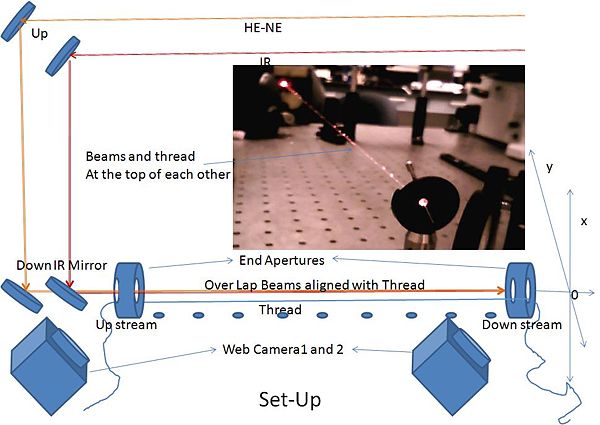 The goal of the set-up is to straighten and align the beams in x (horizontal to the set-up plain) and y (direction normal to the plain) directions, overlapping each other. According to the set-up I used two apertures, a sewing thread and two web cams. First aperture and web cam is installed next to the upstream IR-mirror with an opening size of the beam, next aperture and web cam is downstream roughly 70cms away. The thread is running right through the two apertures. Both the apertures are mounted on the vertical-expendable posts.

Pros: Easy to set-up and super fast. Beams can be seen on the computer monitor and adjusted with highest precision in no time.

Cons: Little hard to align the thread with optical table holes (working to develop easier and more accurate way to do this).He-Ne is too bright to see faint IR in the camera and on the card, so have to do one by one. High power IR will burn the thread.