Make a tool to regulate gene expression of any mt gene. Tool would have two-parts and be nuclear-encoded. 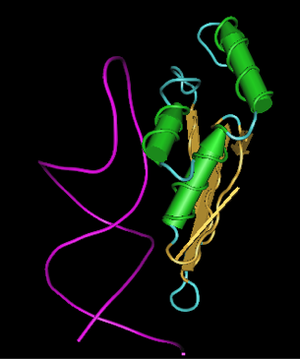 From Current Opinion in Structural Biology 2007 17:77 by James M Berger and Christoph W Müller "A particularly interesting family of ribonucleases that specifically cleave double-stranded RNA serves as the topic of the review by MacRae and Doudna. The RNase III group of RNA-processing enzymes currently attracts broad attention, because two family members, Dicer and Drosha, are responsible for processing RNA transcripts into microRNA (miRNAs) and short interfering RNAs (siRNAs). RNase III proteins are often multifunctional or multisubunit assemblies, and can be classified based on domain composition. Class I RNase III enzymes function as dimers, in which the RNase domains also act as dimerization domains, whereas class II and III family members are monomeric, forming a functional RNase from the internal fusion of two class I RNase III monomers. Comparing RNase III enzymes across a wide range of species leads the authors to conclude that RNase III enzymes use accessory domains as determinants of substrate specificity. For Dicer and Drosha, these accessory domains are the PAZ domain and the additional DGCR8 protein, respectively. Substrate specificity and catalytic domains are spatially separated and, in some instances, it appears that the RNase can precisely measure the distance between the RNA recognition and cleavage sites by using an internal scaffold element that functions as a molecular ruler. Given the number of different types of small RNAs and their importance in gene regulation and other cellular processes, there are sure to be many fundamental insights that will arise from the continued study of this essential protein family." 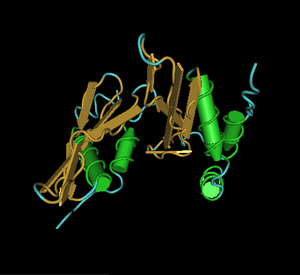 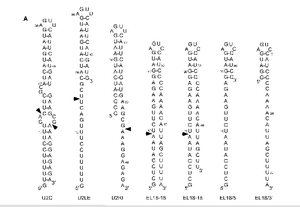 RNAs that can be cleaved by Rnt1p in vitroPLoS one 2007

In vitro requirements shown in PLoS one 2007

Applications for mt gene regulation, in the unlikely case that this system works