Initial communication about strains with Leslie Mitchell in Jef's lab

The authors supposedly sent us the four strains shown in Figure 4. I got a copy of these four strains from one of the iGEM-ers when I arrived in the lab - they were labelled 039, 128, 179, and 201. I can't figure out where these names came from and he wasn't too sure either, but I have continued to use the names. When the strains arrive in your lab I will use these labels as well.


In any case, I can give you the following information (this will make more sense once you read through the methods of the paper):


The four strains in Figure 4 should have the following genotypes:

in reality the 4 strains in our lab have the following genotypes:

So clearly something doesn't quite jive between what is in the figure and the genotypes of the strains we have in the lab. But in any case, we do know for sure that all 4 strains do indeed contain at least one copy of crtYB/I/E - they all PCR amplify using primers specific for these genes. I've also attached a figure with the colours of the four strains compared to CEN.PK. 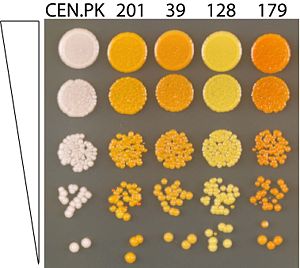 NOTE: there seems to be a mix up between 128 and 179 from the picture above and what I streaked out in the MIT lab. Strain "128" is the one that's more orange than yellow and that gives off white, yellow and red colonies and that's trp-. This strain was stored in my lab collection as NY458. 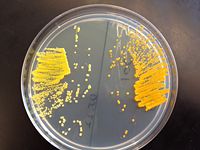 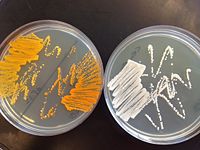 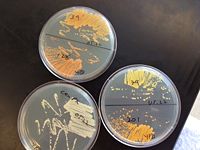