The overall objective of this group project was to engineer a library of biological logic gates which replicate the behaviour of digital AND gates in a biological context. The library has been made with the motivation to create a tool to aid the development of more complex biological systems in future research by easing the selection process of correct parts for the operating conditions and required characteristics of the systems. The AND gate that constitutes the main subject of our tests and characterizations was engineered by Wang et al. in 2011 and detailed in a paper published in Nature Communications.

Synthetic biology is the application of engineering principles in biology.

The major applications are in:

An example of a logic system in biology is a repressilator.

2 modular and orthogonal transcriptional gene switches triggered by Antibiotic simocyclinone D8 and luteolin were built. These can be combined to build AND and OR gates. SD8 is harmful to its producing cell, which has developed a transcription repression mechanism that removes the SD8 when it is produced. Luteolin is a antiallergic, anticancer, anti-inflammatory plant flavonoid. Binding of SD8 and luteolin to their respective repressors reduces affinity with DNA and releases them. Switches can be SD8 (and luteolin) inducible, or SD8 (and luteolin) repressible, but the performance of the inducible ones is much better: they are non-toxic and highly specific and reliable.

Gates have parts that can be diversified to build multiple orthogonal gates. Inputs and outputs had common signal carriers so they can be layered – output of one is input of another. They built 2 input AND gate – one input is TF another is a chaperone protein – cahperone is needed to turn on the output promoter therefore – output promoter only active when both promoters are active and found a genetic circuit within salmonella and built it – 3 parts that form core of AND gate – the activator, the chaperone and inducible promoter. Salmonella was selected due to its orthogonality and dynamic range. A saturation mutagenesis library was designed to change the −10 region and screened to identify a mutant with a decreased background and higher dynamic range. They also tested for orthogonality – looked at interaction between activators and chaperones, TF and promoter. A problem with the gate characterization is that the data are presented where the input is an inducer concentration and the output is fluorescence. To guide the connection of circuits, the data needed to be in a form in which the inputs and the outputs have the same units. This was achieved by using a mathematical model combined with additional experiments. The 2 input AND gates – permutations – created 2/4 input AND gates – alternaitve logic combinations – can produce same funciton – those design were chosen with the purpose of studying gate layering. A potential problem in layering genetic logic gates is that the resulting programs are asynchronous. Because there are delays at each layer, this can lead to transient errors in the output, known as faults

Using NOT gates - an input promoter drives the expression of a repressor protein that turns off an output promoter. Each gate is characterized by measuring its response function, in other words, how changing the input affects the output at steady state. The circuits can be connected to genetic sensors that respond to environmental information. This is used to implement checkpoint control, in which the cell waits for the right signals before continuing to the next state.

Each latch requires 2 repressors – inhibit each others expression – 11 SR latches were designed using a phase plane analysis – 43 circuits were constructed – connects these latches to different combo of sesnsors that responsds to small mol – a gated D latch is constructed – u to 3 SR latches (based on 6 repressors) are combined in a single cell – 3 bits are reversibly stored. Checkpoint control leads to variability in the time spent in each stage but synchronizes the requirements for progression across cells and buffers against fluctuations. Latches are analogous to bistable switches and have two stable states that are used to store one digital bit of information – cross coupled NOR gates. The toggle switch has been connected to a single sensor by having the output promoter drive the expression of one repressor, and this has been used to remember transient exposure to a sugar, quorum signal, or an antibiotic. Repressor-based NOR gates are connected to each other and sensors by signal matching their response functions. Latches are designed by recognizing that these empirical functions can serve as nullclines to identify gate combinations that will exhibit bistability. Bistability is a necessary criterion for building an SR latch. This is achieved by arranging two repressors to regulate each other’s expression. For latch to be extensible – must have 2 promoter inputs and 2 promoter outputs – if have the same units – can be used to connect latch to genetic sensors.

E coli sensors that respond to the consumption of feedstock (glucose), dissolved oxygen, and by product accumulation (acetate) are constructed and optimised - by integrating these sensors logic circuits implement temporal control over an 18h period. Two circuits are designed to control acetate production by matching their dynamics to when endogenous genes are expressed (pta or poxB) and respond by turning off the corresponding gene. However, an individual sensor can only implement a switch at a one defined cell state and cannot be used to drive a series of events. An alternative approach to modifying the sensors is to select a set of sensors that turn on at different times during a bioprocess and then use a genetic circuit that responds to a pattern of sensor activities to turn on at a defined point. During a bioprocess, many conditions change dynam- ically inside the reactor and inside of individual cells. Therefore, the same set of sensors can be integrated in different ways to generate different dynamic responses. The low oxygen sensor turns on first, followed by the turning off of the glucose sensor, and finally the acetate sensor turns on. Simulations of many genetic circuits implementing these sensors’ signals into different logic operations show that diverse responses are possible. From these, we select several based on layered AND and ANDN gates, construct them, and verify their temporal response. Over the course of a growth experiment, the output of the three sensor promoters is continuously changing. These promoters can be connected as inputs to a logic circuit that responds only when each sensor is at the correct level. Thus, by connecting the sensors to circuits that implement different logic operations (truth tables), the circuits will produce different responses over time. Because the circuits are based on the layered expression of regulators (a cascade), different circuits that encode the same truth table can result in different dynamics due to delays in signal propagation. To determine the range of possible dynamics, simulations were run for all possible 3-input logic circuits designed based on layered AND, ANDN, and NOR gates.Foremost is the problem of toxicity and stability. Even medium- sized synthetic circuits (≥4 regulators) can slow growth instability in the form of plasmid loss or mutations to the genome. Further, the slowing of growth can be devastating for bioproduction.

A 5-input highly specific logical AND gate to identify and destroy HeLa cancerous cells was engineered. Inputs are miRNA markers which are either expressed (2 of the 5) or not (3 of the 5) in HeLa cancer cells. The specific combination of the 2 HIGH inputs being ON and the 3 LOW inputs being OFF triggers apoptosis (cell destruction). Although there still are challenges to implement DNA delivery to cells in vivo, this is an example of how logic gates can be used for a sensing-processing-acting application. Such logic-based cancer identification mechanisms have the potential to aid greatly not only in recognising but also in curing tumours.

Efficient gene expression-regulating bioLogical gates were and are essential for the development of novel biological organisms. This experiment consisted of building synthetic gene circuits using lacI, tetR and cI repressors, to insert them in E. Coli and communicate with programmable and programmed cells. With these, in vivo signals can be controlled by external inputs (e.g. by IPTG diffusing into the cell as the input to a combination of NOT and IMPLIES gates). Mutations are required for an effective combination of 2 separate natural mechanisms, and in this case they were done by varying the RBSs of the plasmids used. The larger goal of this experiment was to build a library of standardized biological components that could be efficiently combined together.

After conducting the literature review, we identified factors that are important in the design of our circuit such as: orthogonality, modularity, leakage and clearly identifying precise ON/OFF states. Furthermore, we came to realise that the forward-engineering approach which utilises quantitative characterisation and mathematical modelling before building the circuits were quite important for our group project timeline.
Following the review, the group read the paper that forms the starting point of this project: Engineering modular and orthogonal genetic logic gates for robust digital-like synthetic biology, by Wang et al. A presentation about the paper was also made and can be found.

On top of all these papers, the whole group read the paper: Engineering modular and orthogonal genetic logic gates for robust digital-like synthetic biology

The first thing we did as a team was to conduct a literature review to identify how logic gates are constructed and how they can be used. We then broke down the main tasks around this project into four parts:

Mathematical modelling of the the genetic circuit

Task: Read various papers on the subject of interest and create a summary for them.
Team members: Entire team 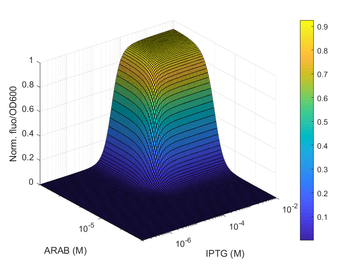 Output of engineered AND gate for different inducer concentrations

We have taken a bottom up approach to design the gates, following parts-based characterisation and mathematical modelling.

The following information about each AND gate produced has been recorded:

Procedure from New England Biolabs and Dr. B. Wang Thesis

Procedure from Dr. B. Wang Thesis

Procedure from Addgene and Dr. B. Wang Thesis

Procedure from Addgene and Dr. B. Wang Thesis 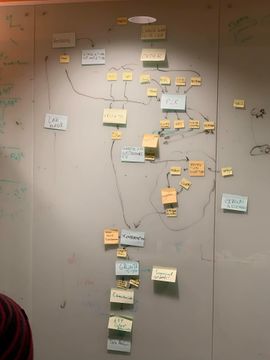 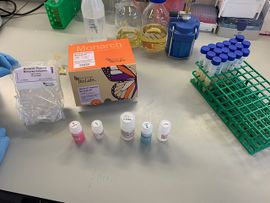 Lana went to the lab on Wednesday and after innoculation it was time for plasmid extraction - the following protocol was followed.

Yield and quality of plasmid DNA is affected by plasmid copy number, plasmid size, insert toxicity, host strain, antibiotic selection, growth media and culture conditions. For standard cloning strains of E. coli, we recommend using a single colony from a freshly streaked selective plate to inoculate a standard growth media, such as LB (Luria-Bertaini) media. Cultures are typically grown at 37°C and 200–250 RPM in vessels that allow some aeration (Erlenmeyer flasks or culture tubes on a roller drum) and harvested after 12–16 hours as the culture transitions from logarithmic growth to stationary phase. This is the time at which the plasmid DNA content is highest. While cultures in LB often saturate with a final OD600 between 3–6, growth to saturation often leads to cell lysis. As a result, plasmid yields and quality are reduced and the likelihood of co-purifying unwanted host chromosomal DNA increases. Use of rich media, such as 2X YT or TB, produces higher biomass in a shorter time period. If chosen for growth, adjustments to the culture times and amount of cells used in the prep should be made to correct for these differences, and to avoid overloading the matrix and reducing DNA yield and quality. 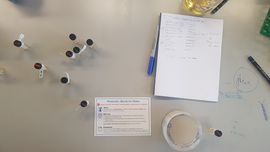 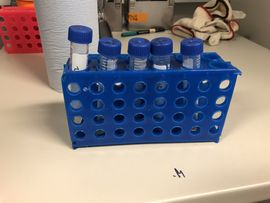 Picture of the tubes that will be incubated overnight 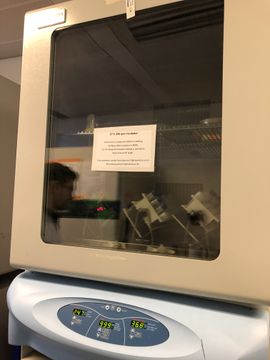 Picture of the incubator tubes were put in overnight 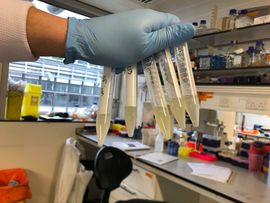 Result of the overnight cultures

We verified the bacteria that Charles and Lana had streaked in the previous session (DH5-alpha E. Coli containing the Gibson assemblies)