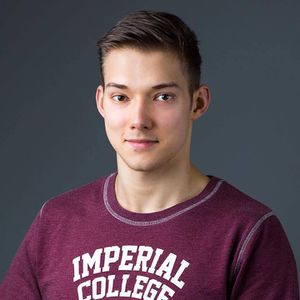 
I am a final year undergraduate student of biomedical engineering at Imperial College London. I worked in the Endy Lab at Stanford University in the summer of 2018. My summer research focused mainly on the experimental identification of the function of the essential unknown genes of the minimal genome.

I currently work on the investigation of reinforcement learning as a tool for the optimal control of the biological systems, with the main application in the clinical data-driven, patient-specific eczema treatment design under the supervision of Dr. Reiko Tanaka at Imperial College London.

(February 2016 - August 2016) Tanaka Group, Imperial College London: Mathematical and computational modeling of the optimal treatment of atopic dermatitis (eczema).
(July 2017 - October 2017) Murray Lab, California Institute of Technology: Mathematical and computational modeling of simple artificial cell and development of a general framework for rapid implementation of the interconnection of its modular subsystems.
(July 2018 - August 2018) Endy Lab, Stanford University: Experimental alteration of the cloning compatibility of the bait and prey plasmids for the protein-fragment complementation assay in the minimal organism JCVI-syn3.0.
(October 2018 - present) Tanaka Group, Imperial College London: Investigation of the reinforcement learning as the tool for the optimal control of the biological systems.

1. Essential Unknowns:
Identification of the function of essential unknown genes in the minimal genome using protein-protein interaction network.
One of the factors determining the success of the effort to build an artificial cell is our ability to characterize and understand the function of the genes essential for the viability of life. The smallest viable living organism, JCVI-syn3.0 contains 473 genes, of which 149 is of unknown function. My specific research goal is to facilitate our understanding of the function of these essential (and quasi-essential) genes for life through the experimental development of the protein-protein interaction network of the JCVI-syn3.0 and computational investigation of the properties of the unknown essential genes.

Update (December 3 2018): Final Report In the end, after a lot of work, failures, lessons learned, and sleepless nights... we got some results! The detailed report of my experimental work on the modification of the bait and prey plasmids for the protein-fragment complementation assay can be found here: Changing the cloning compatibility of the plasmid vectors for the high-throughput protein-protein interaction assay in the minimal genome.


2. PUREity of expression:
Investigation of the function of essential unknown genes of minimal genome using cell-free expression in PURE system.
The advances in the cell-free synthetic biology enabled us to quickly prototype various genetic circuits using cell free extracts, such as PURE system or TX-TL. In-vitro expression of the genome of JCVI-syn3.0 in a cell-free PURE system could give us the information about the interactions between the products of these genes and hence help us identify their functions. Alternatively, the individual expression of the genes of the minimal genome could provide us with knowledge about the reaction kinetics of the essential unknown genes and therefore assist us in determination of their function, for instance, by comparison of the reaction kinetics of unknown genes to the reaction kinetics of the other genes with known functions.


3. How do they click together?
Computational and mathematical investigation of the input/output behavior of the interconnected cell-free biomolecular subsystems.'
The complex biomolecular systems suffer from the problems arising due to mutual interactions of the species in different subsystems, such as retroactivity and resource competition. During my internship in the Murray Lab at Caltech, I have started developing BioSIMI, a MATLAB framework for the simple input/output modelling of interconnected biomolecular subsystems, particularly applicable to the TX-TL reactions. The framework still needs a lot of work - feel free to join me at GitHub!

(To be added)
Publications that I read and that allow me to do the research...
Additional relevant information...