Transect #5 is located on the northern east side of the American University campus, along side the tennis courts. This transect is a fenced in community garden that contains a variety of different vegetables like lettuce and carrots throughout the garden. Among other biotic components, ants everywhere, worms in the dirt, birds in the sky, and trees along the barrier can also be found. Other abiotic components also make up this garden, including: soil in the boxes in which the vegetables are planted, rocks and wood chips randomly throughout, a fence along the border, and lastly a hose that carries water to all the crops. 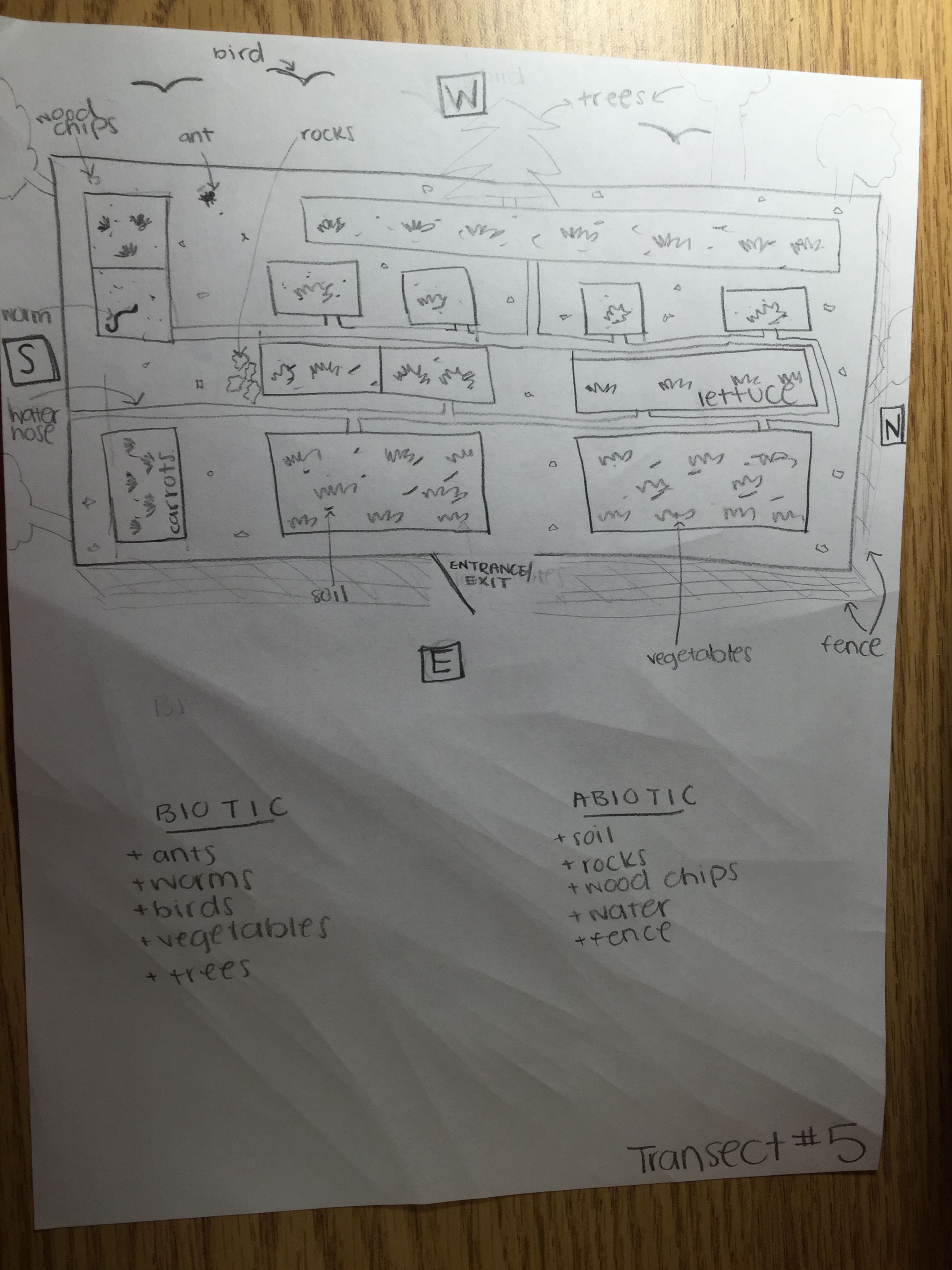 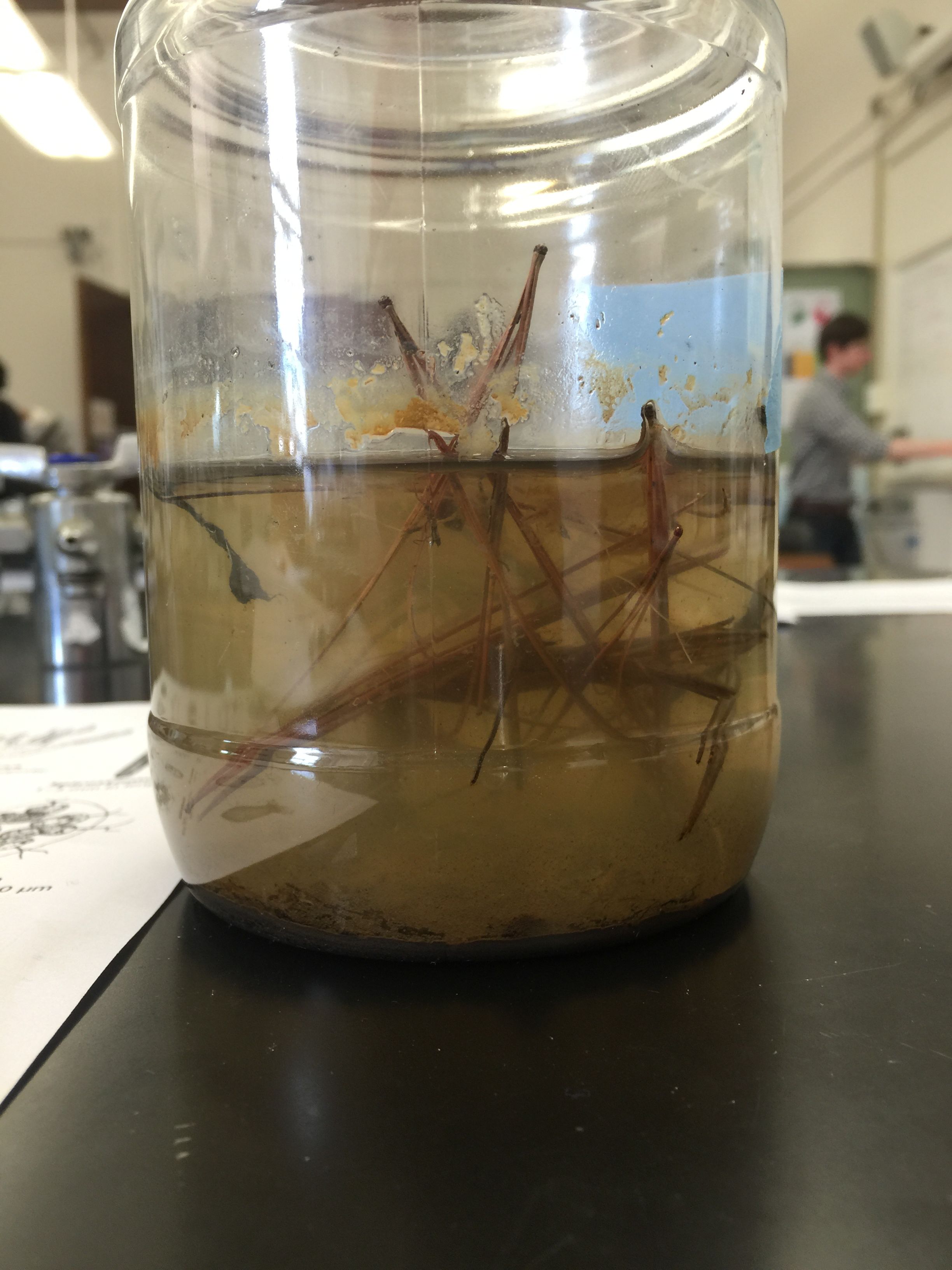 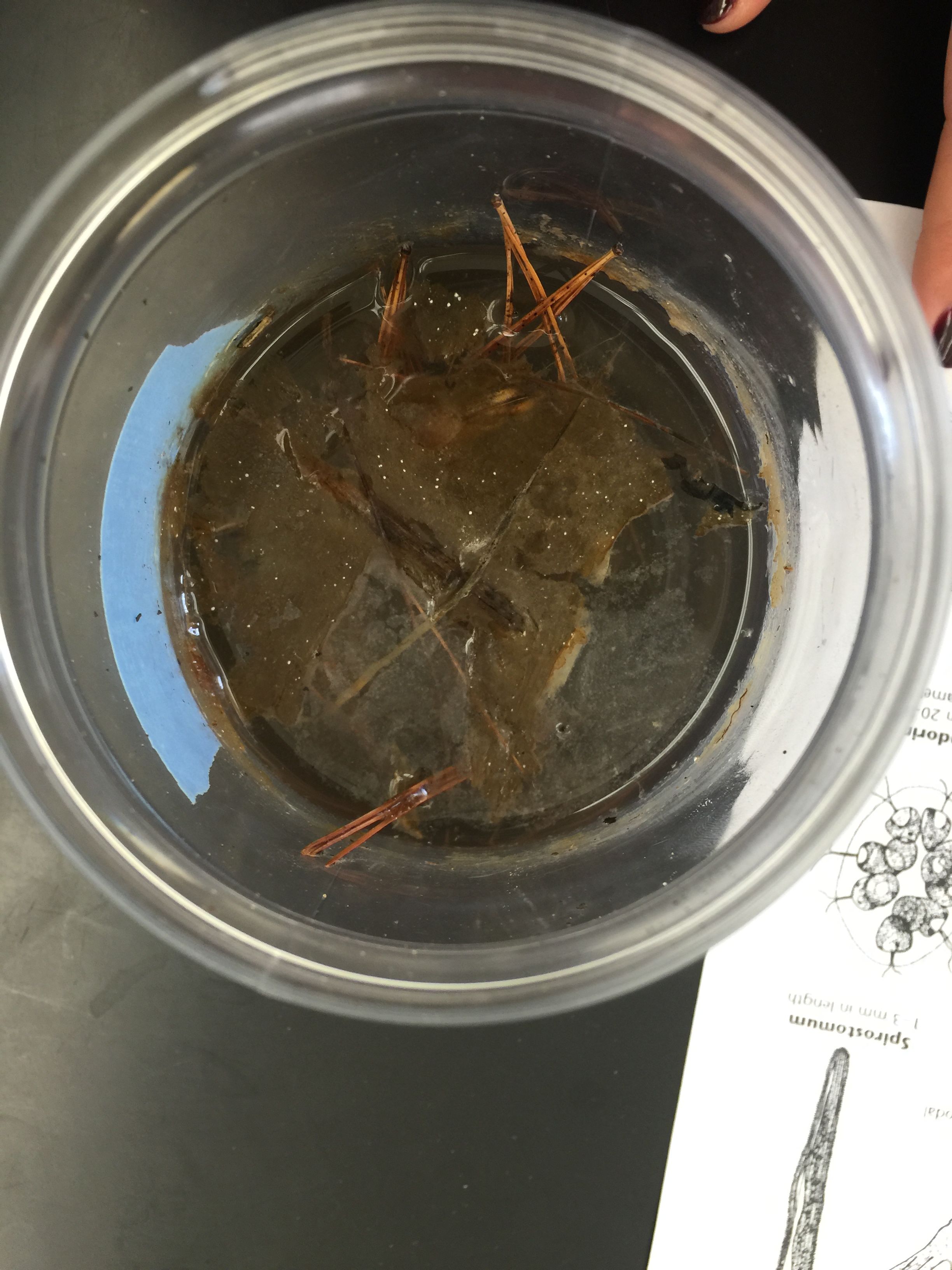 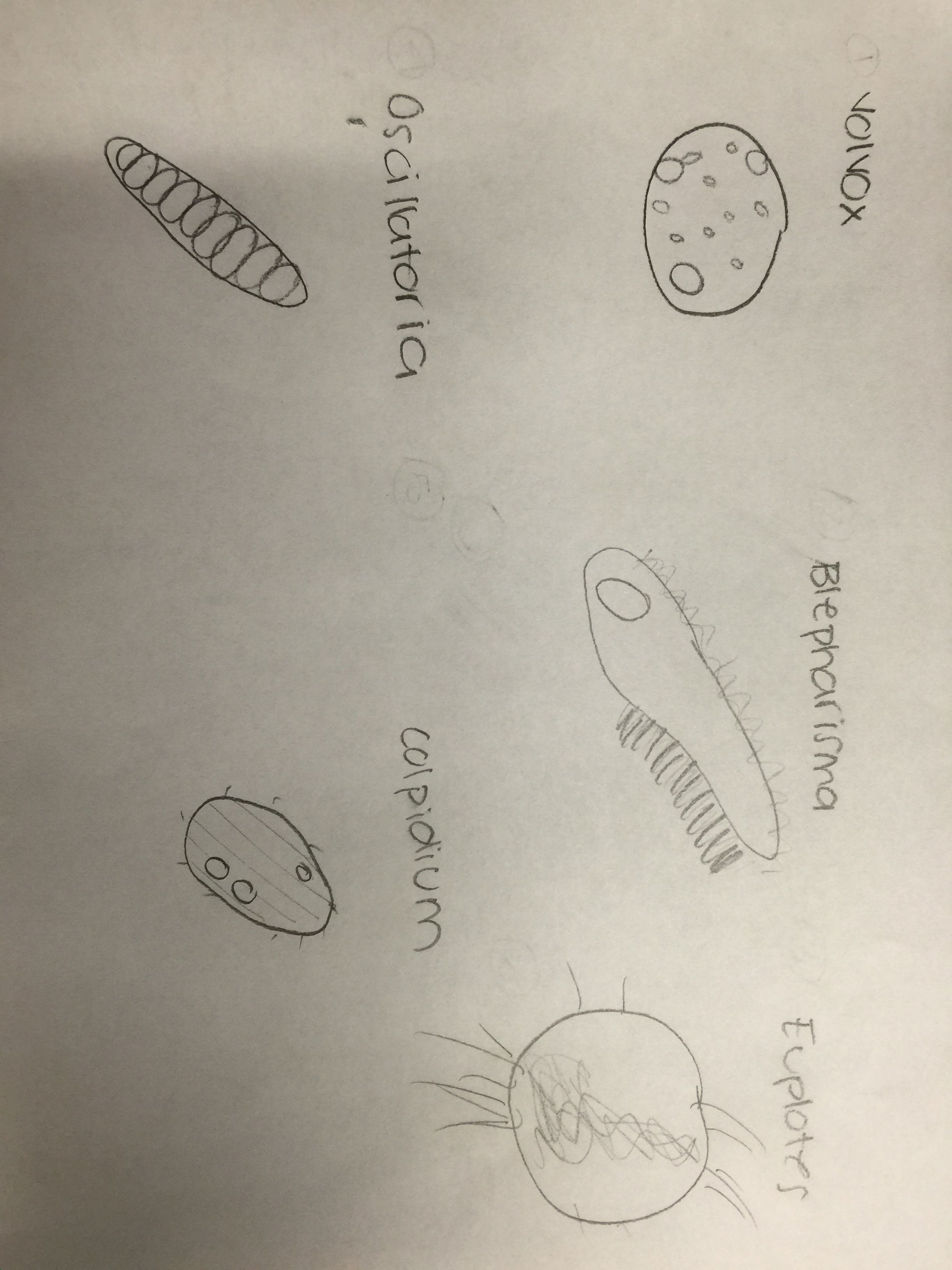 The following is a diagram of the serial dilution performed using broth and a 100 micrometer sample from the Hay Infusion. 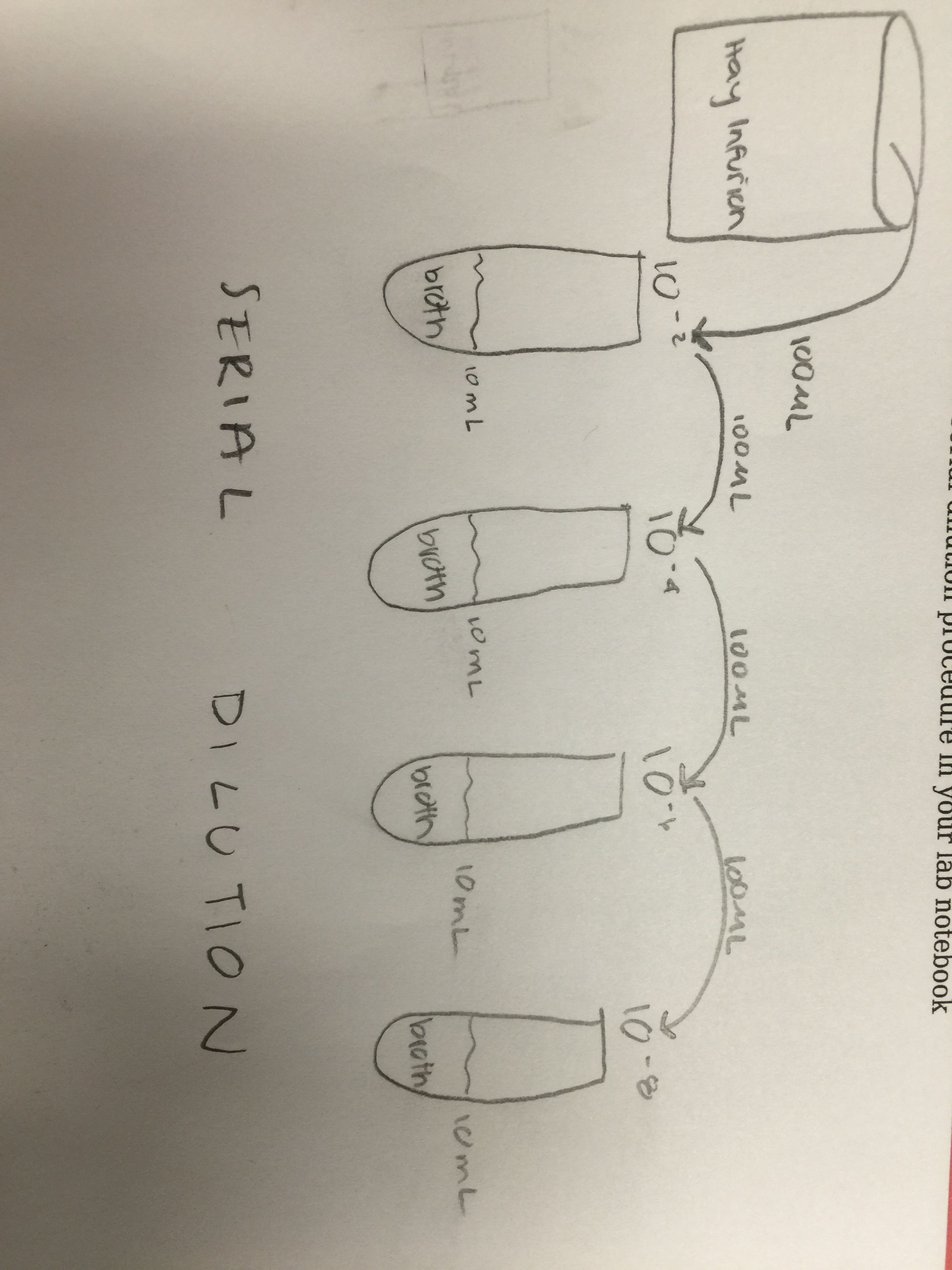 The smell of our culture this week was much stronger than the week before. The water also appeared less unclear and more dirty. To add, the film that was on the top layer of the container was also thicker and a film also lined much of the plant life. The changes observed from last week to this were probably due to the further reproduction of the microorganisms. Archaea will not have grown on the agar plates, because the environment was not severe enough. Archaea cultivate in extreme temperatures, which is why they can be found in hot springs. 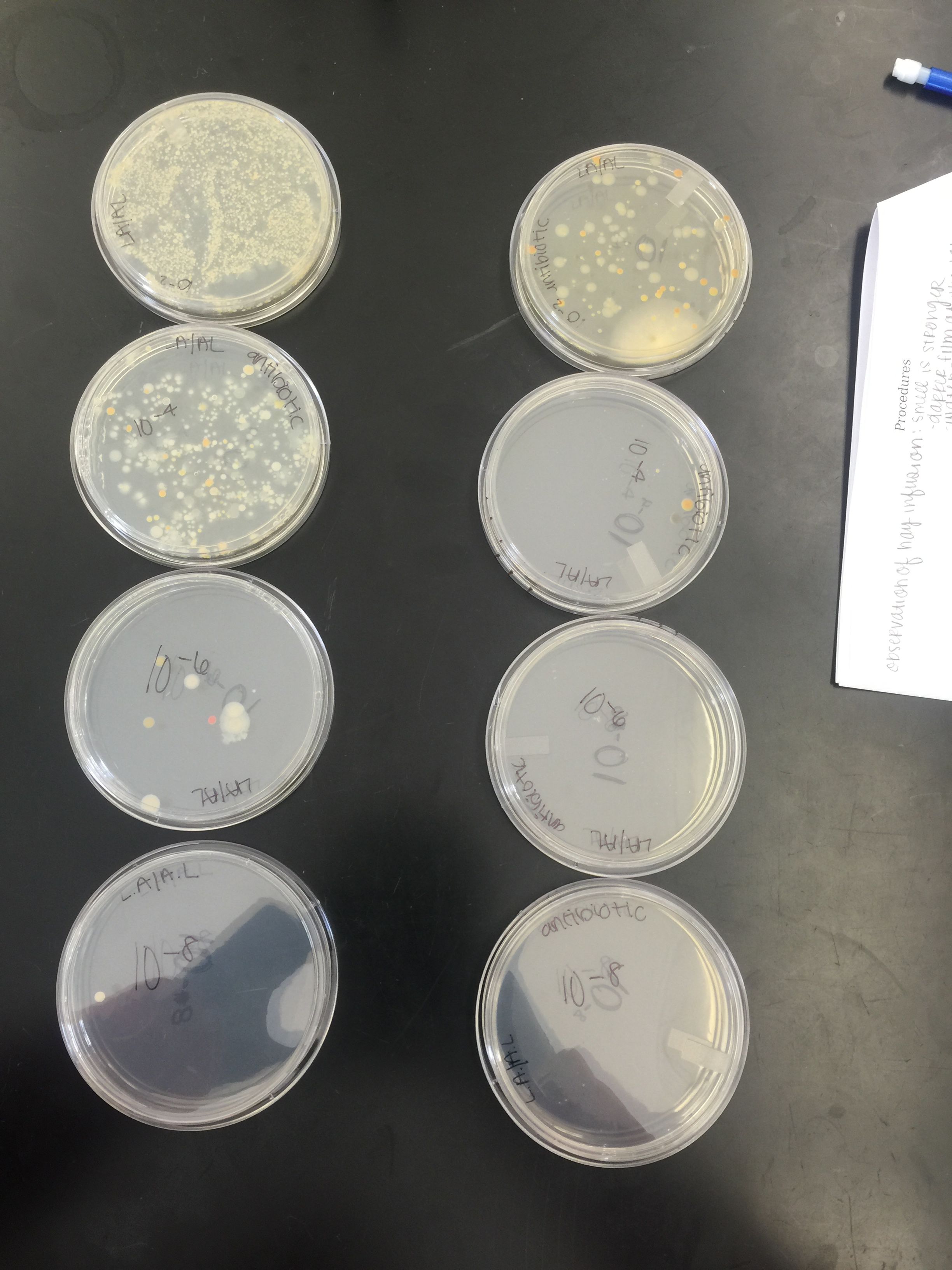 This week we observed the petri dishes (pictured above) we plated last week with diluted samples from our Hay Infusion Culture. We plated some samples with an antibiotic, tetracycline, and others without. As expected, or hoped for at least, the plates which were treated with tetracycline had fewer colonies, as opposed to the the plates without treatment. Thus, for the plates treated with antibiotics to have grown any bacteria, means that in the plate were antibiotic resistant bacteria. So the tetracycline killed off the "weakest" bacteria, and by the process of natural selection, antibiotic resistant bacteria grew in the dishes as they outlived the other and then reproduced, passing on their "fittest" genes; this still accounts for why these plates had far less colonies. The plates treated with antibiotic and diluted 10^-6 and 10^-8 grew no bacteria. These samples had minimal bacteria, meaning they also had less variability and the antibiotic had the best chance to work fully.

The following table shows how many colonies grew on each of the eight plates. 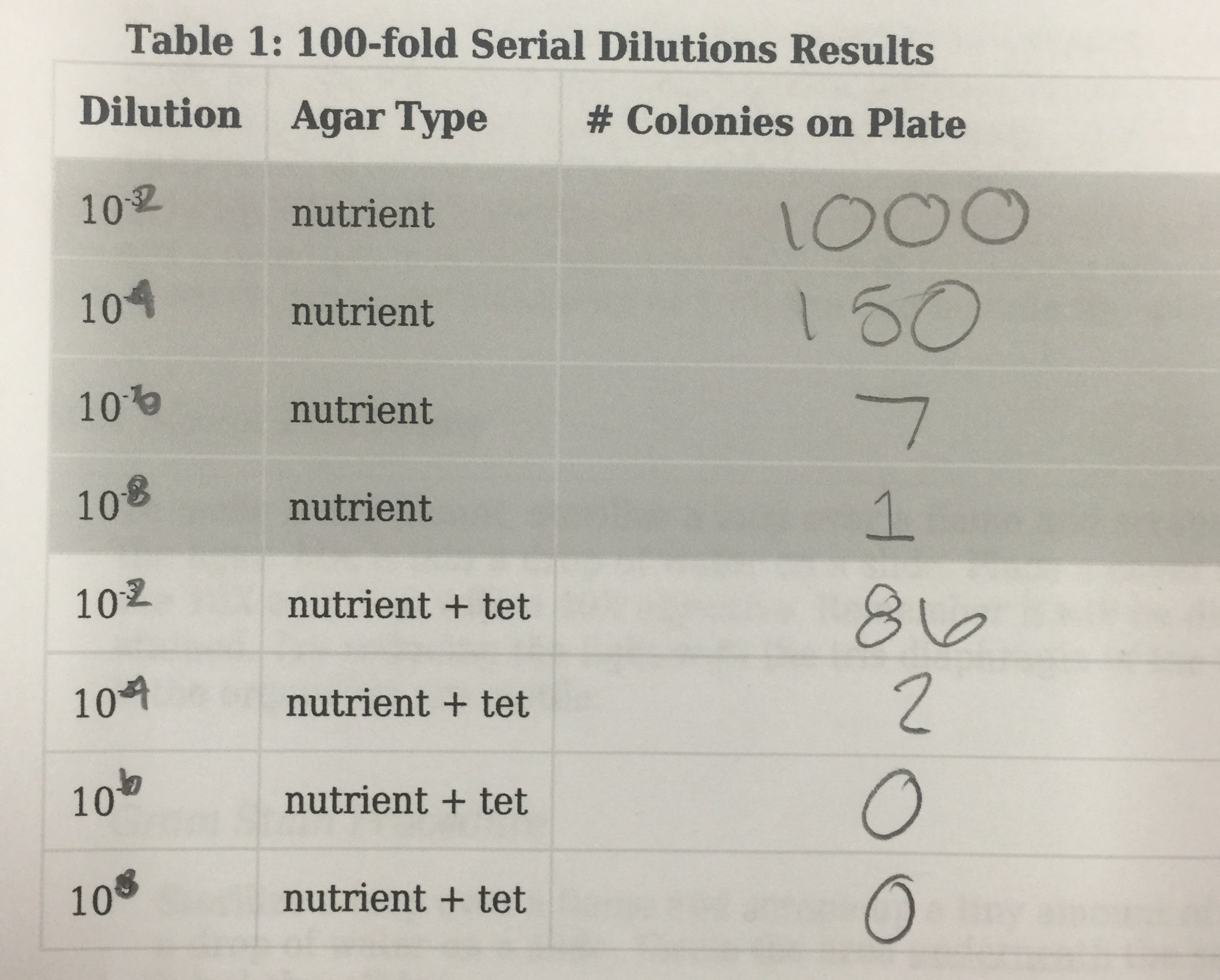 Mechanisms of Action for Tetracycline (January 28, 2016)

Tetracycline is an antibiotic that was discovered in the 1940s. It can work against organisms like chlamydiae, mycoplasmas, and rickettsiae, and protozoan parasites by limiting their protein synthesis. Tetracycline prohibits the attachment of tRNA to its acceptor site (Chopra). So without protein synthesis, amino acids cannot be processed and carry out their many functions.

The first organism examined came from the plate diluted 10^-2 and had tetracycline. On the plate, it appeared circular with an entire edge and a convex surface. It also had an orange color. Under the microscope, the bacteria appeared to be round and green with motility, like the other samples, and was gram-negative (refer to Fig.1). The second organism also came from the same plate, however it was filamentous and white. It had an umbonate surface and was dry and powdery. This bacteria also looked round and green under the microscope, and was gram-negative. The third sample examined was extracted from the plate diluted 10^-4 and did not have tetracycline. From the naked eye, the bacteria appeared to be circular and whole with a convex surface and clear color. Under the microscope, the organism appeared to be very tiny. It was round and green, and the staining revealed it was gram-positive, as it can be seen in Fig. 2. The last sample observed was taken from the plate diluted 10^-6. As noted in the plate, this bacteria appeared to be circular, whole, smooth, and was raised. Like the other bacteria, this one was also very tiny and green with motility. The staining demonstrated that this bacteria was gram-postive. 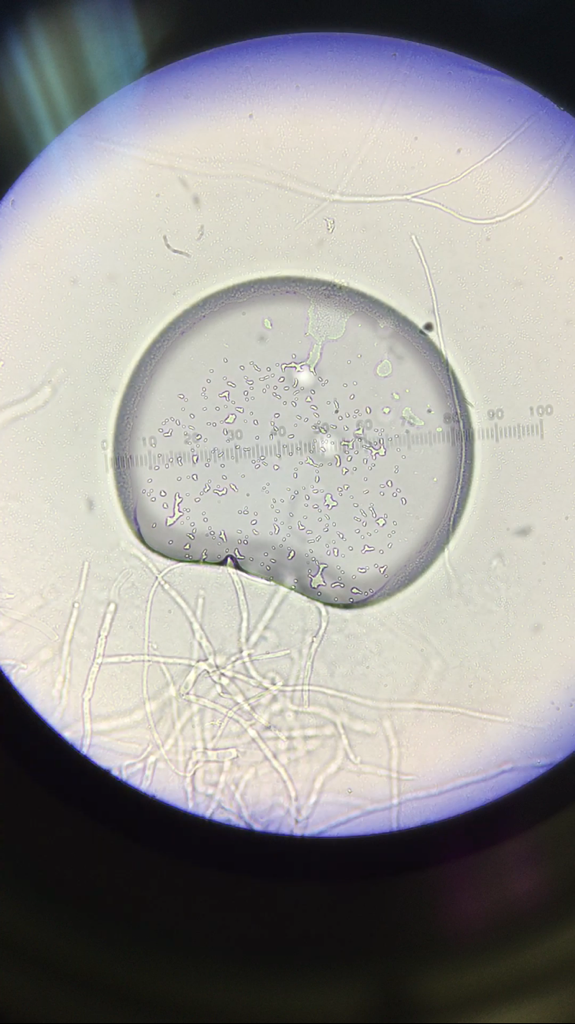 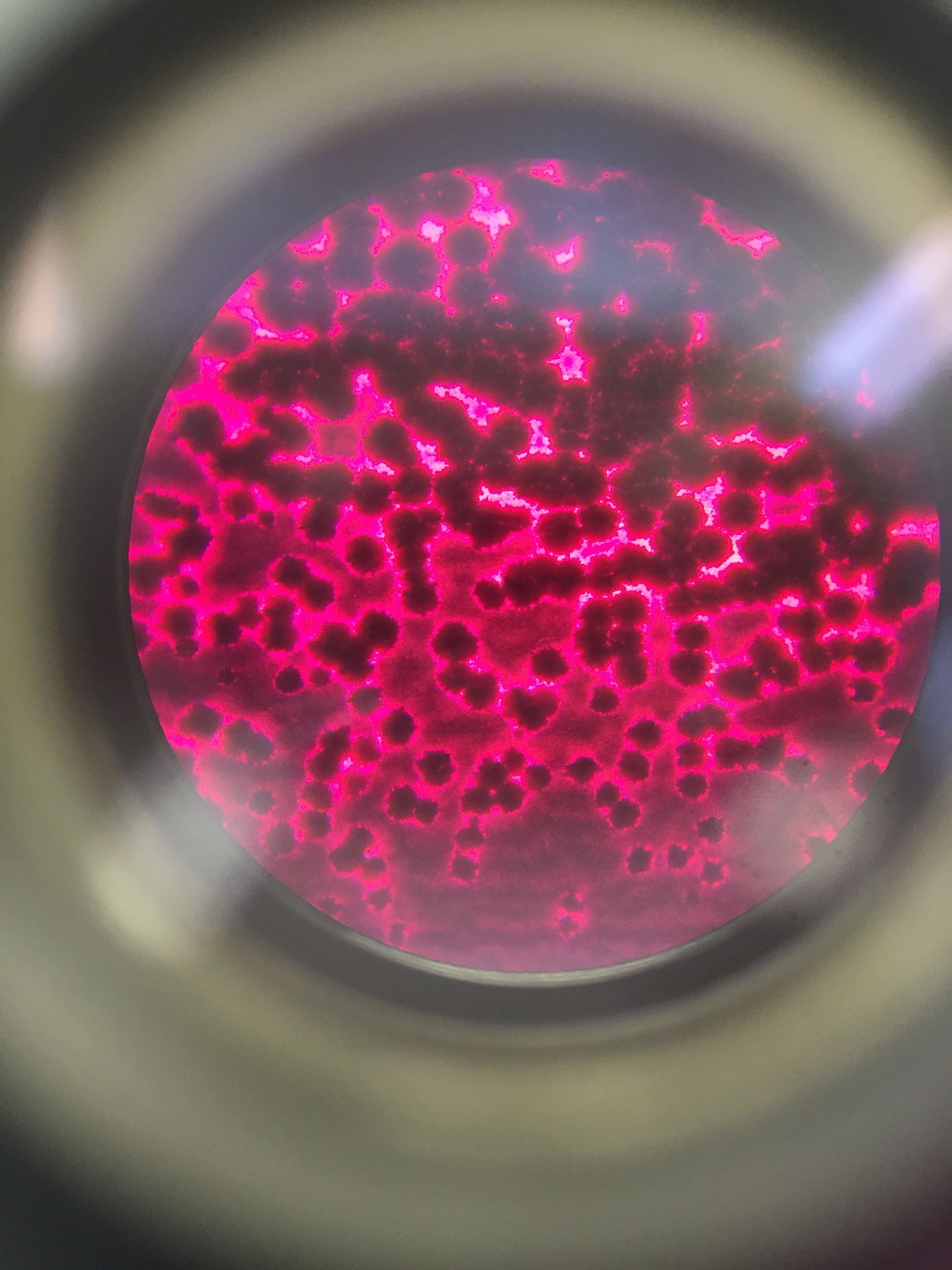 Five plant samples were extracted from Transect 5, otherwise known as the garden. Fig. 1 is a panoramic photograph of the garden on this day. The first plant sample (Fig. 2) was taken from the furthest corner near the tennis court. The whole sample, including its roots and leaves measured about 12 cm. All five leaves present were mostly green with some darker spots on them. When the leaves were examined more closely, as seen in Fig. 3, it was determined the sample was a dicot, because the veins appeared to form a net like pattern, and gymnosperm. The second sample was a single leaf, collected from one of the wooden boxes in the garden labeled "herbs". It measured about 5 cm. The leaf was green and had a fuzzy layer on it, which can be noted in Fig. 4. The leaf also had a very distinct smell. The veins also formed a net like pattern, likely making it a dicot as well. This can be observed in Fig. 5. The herb however is an angiosperm, because herbs do flower. The third sample, pictured in Fig.6, was a piece of lettuce taken from a different wooden box, labeled "lettuce." The piece of lettuce examined measured about 30 cm. Overall it was green, however it was soggy and had some brown because it had passed its prime, which explained its unpleasant smell. When the leaf was further looked at, it was determined this plant was also a dicot. The vascularity can be seen in Fig. 7. Because lettuce flower, it was also established that this plant is an angiosperm. The fourth sample was taken from one of the wooden boxes along the fence that runs along the tennis courts. This sample is pictured in Fig. 8. With the stem and all, it measured 18.5 cm. The brownish gray sample appeared to have five petals, which is why it was classified as a dicot and angiosperm. It was also very dry. The last sample examined was taken by the entrance of the garden. While similar in appearence to the first sample taken, this plant was slightly different. There were a few differences in the leaves, more specifically the edges and the color. This sample did not have the darker purple tones in it. The differences can be noted in Fig. 10. This sample was considered to be a dicot and gymnosperm. which can be noted. This sample measure about 8 cm. 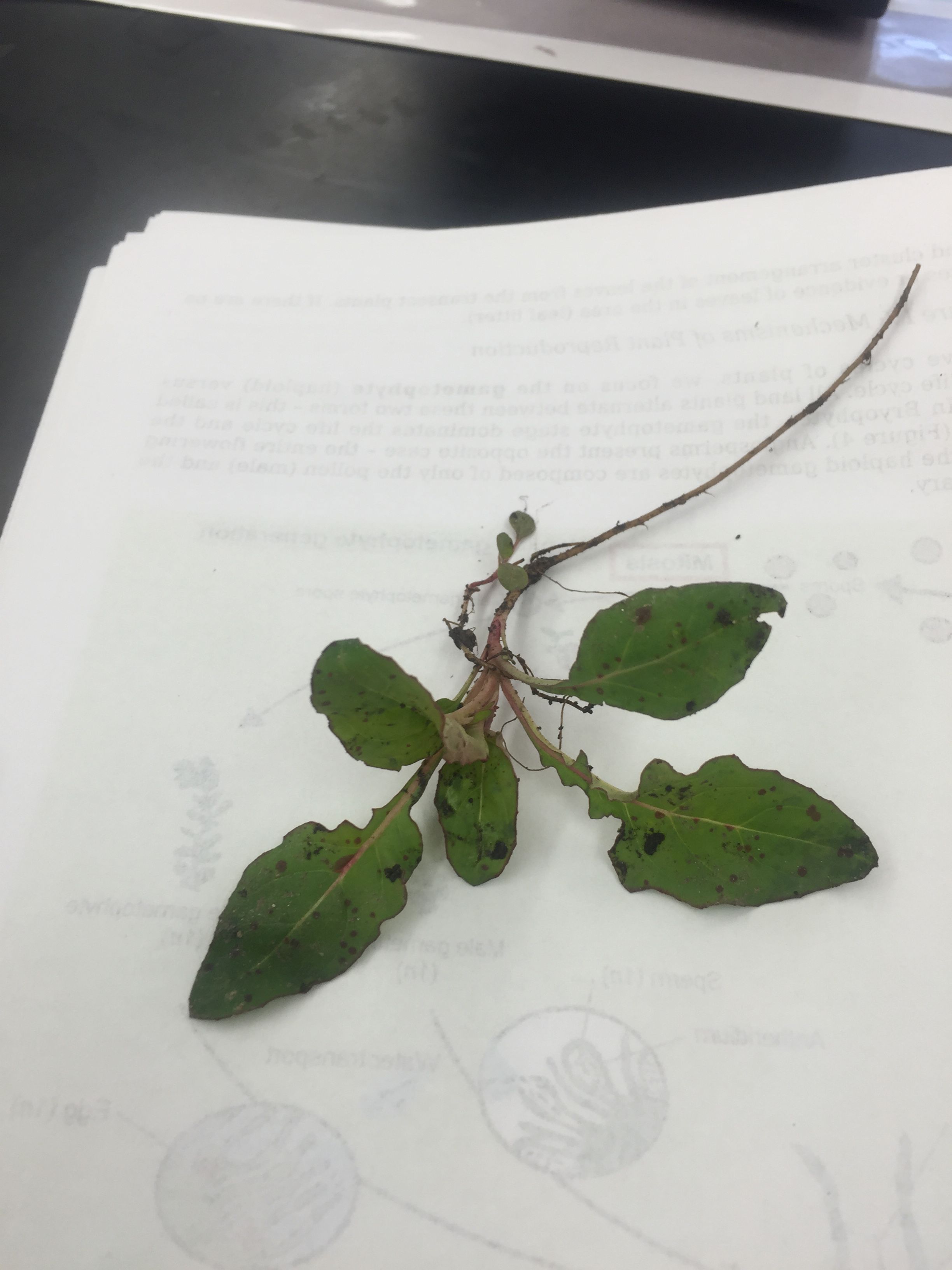 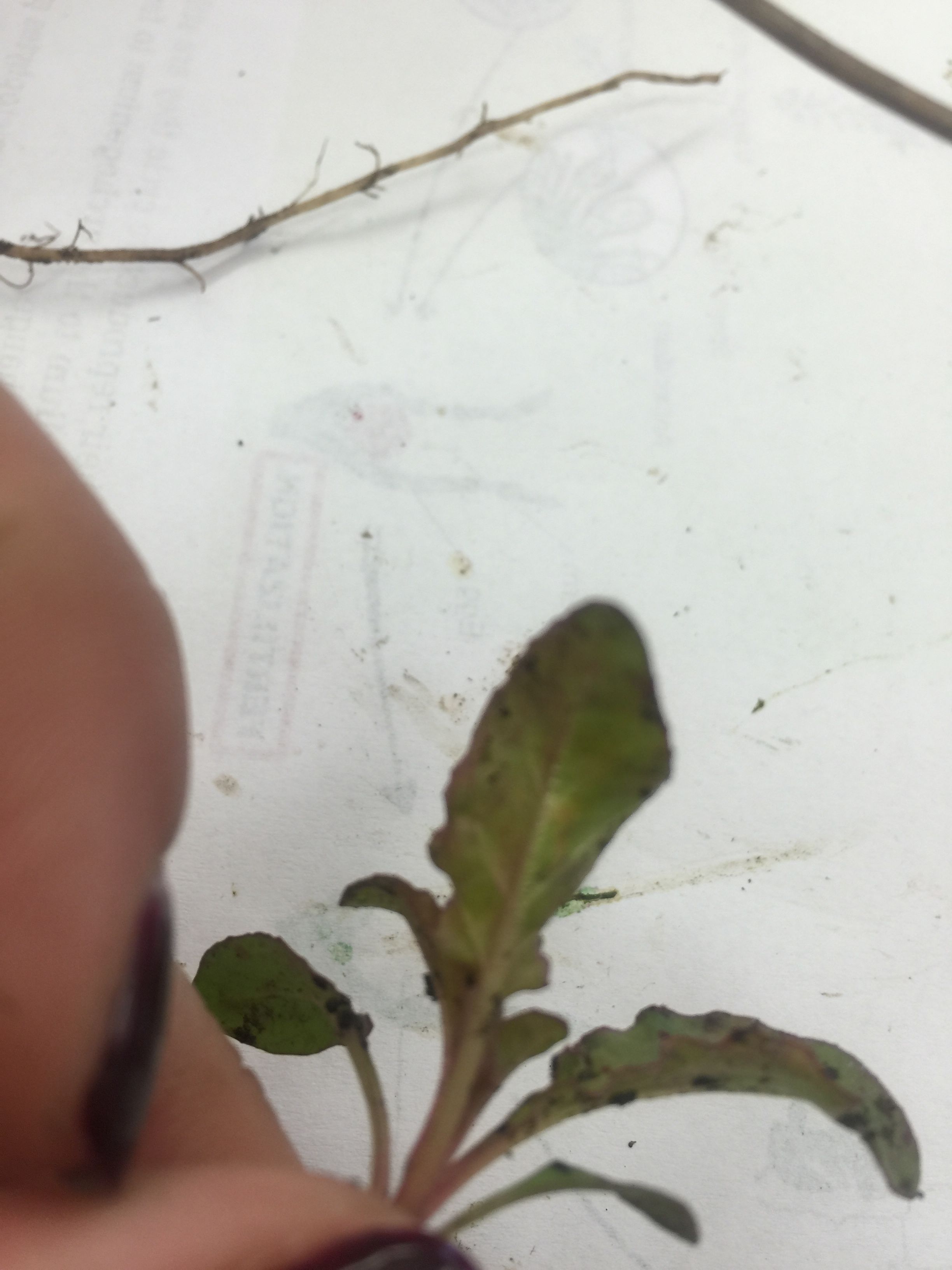 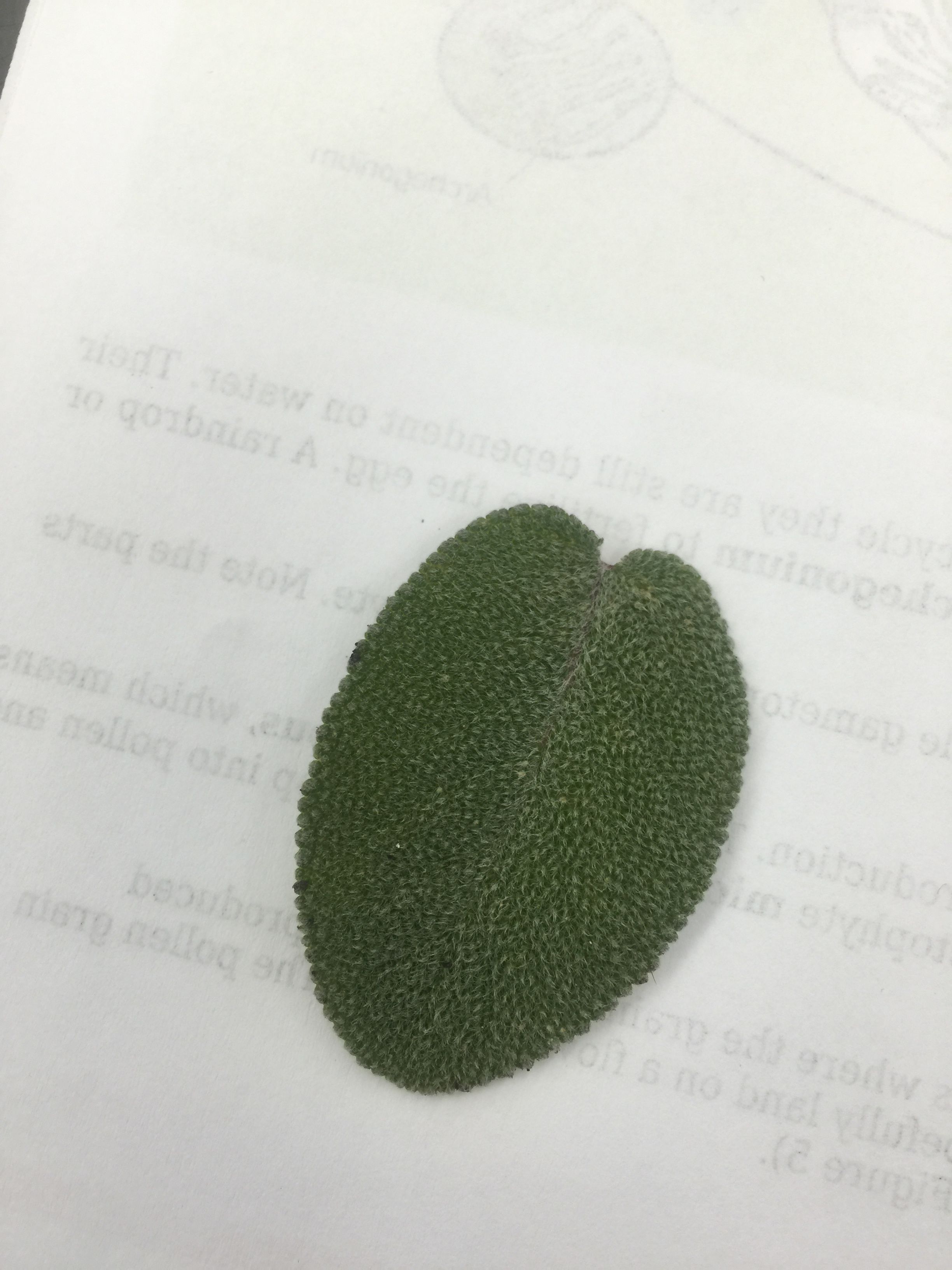 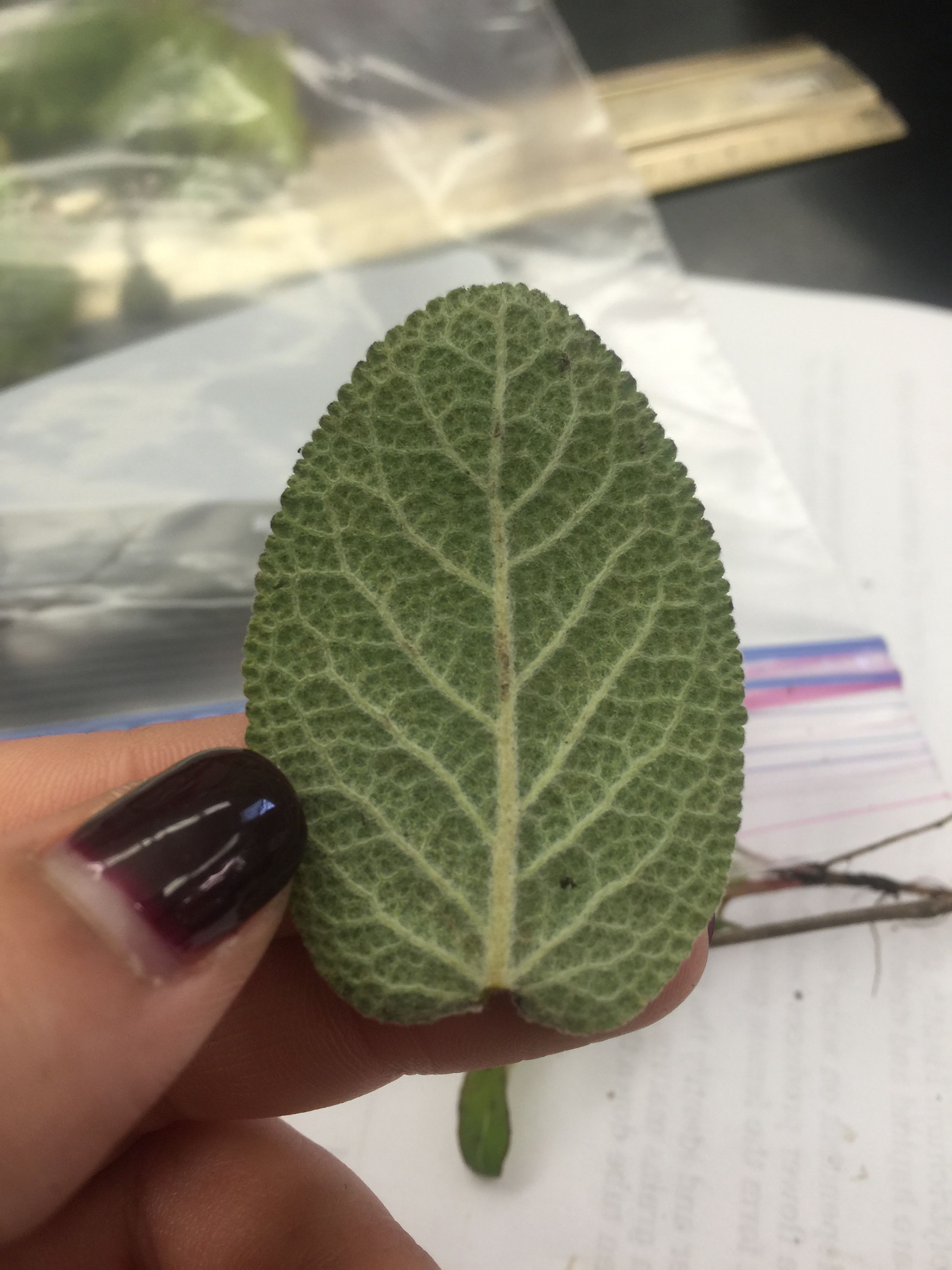 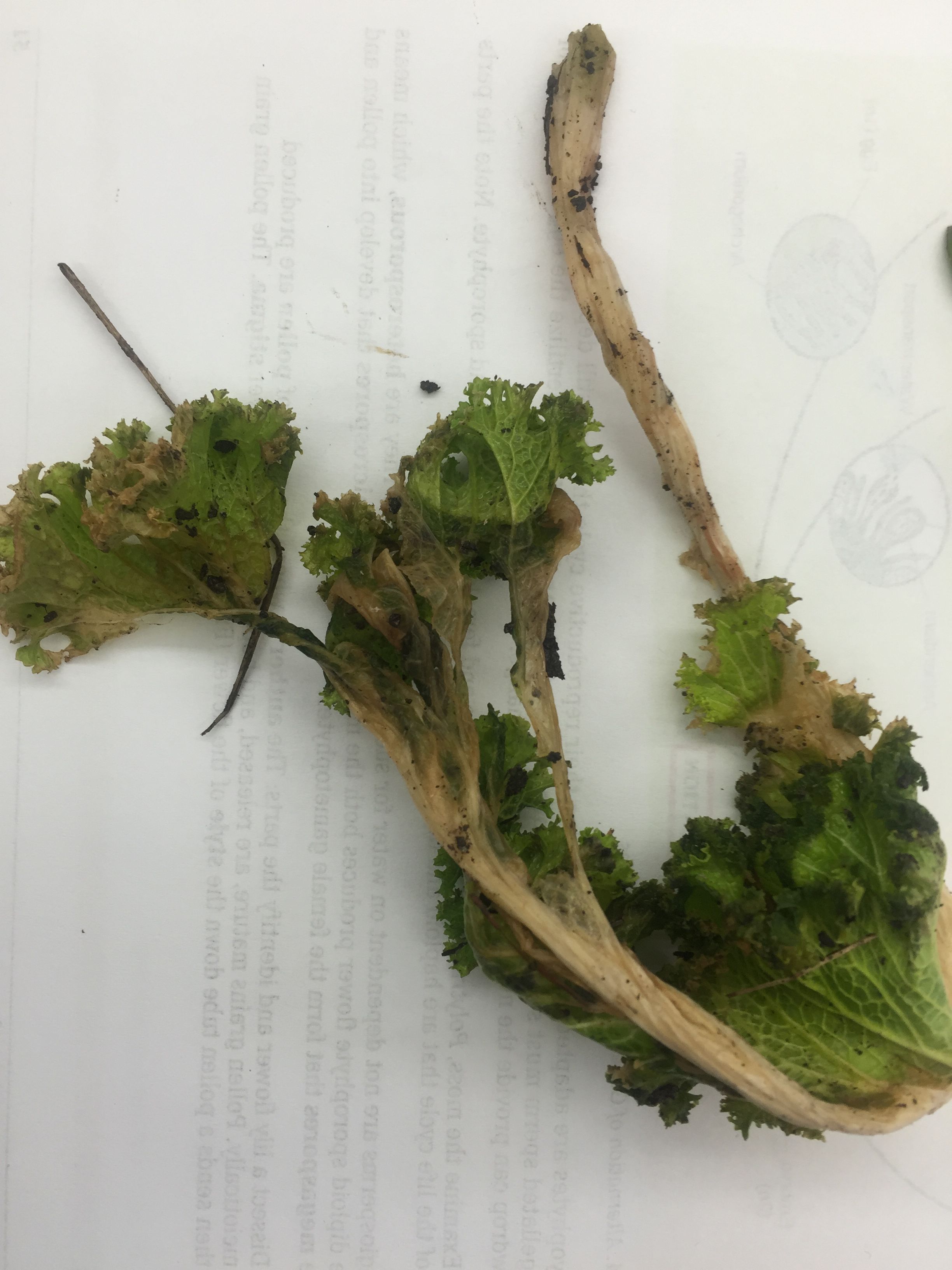 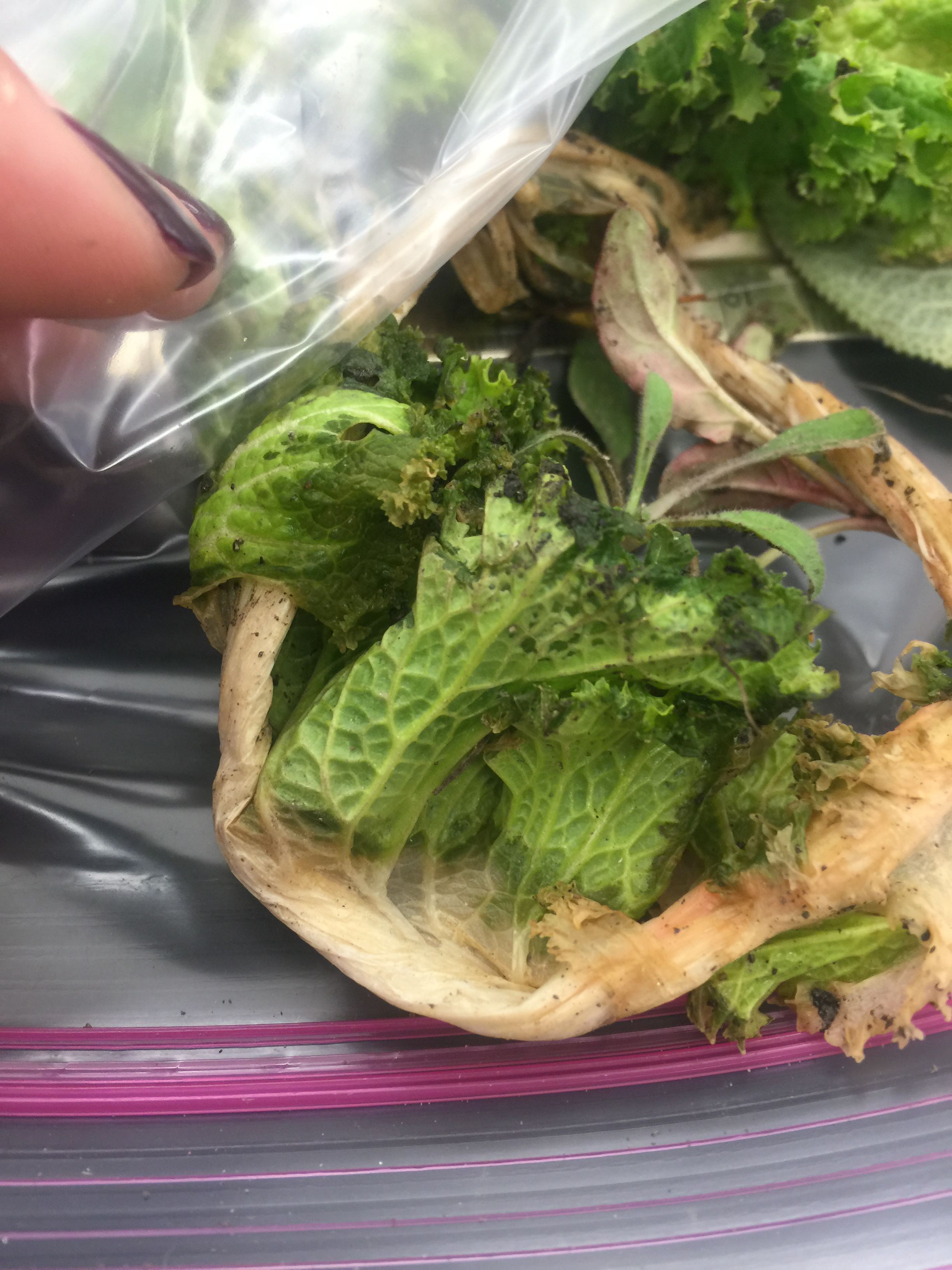 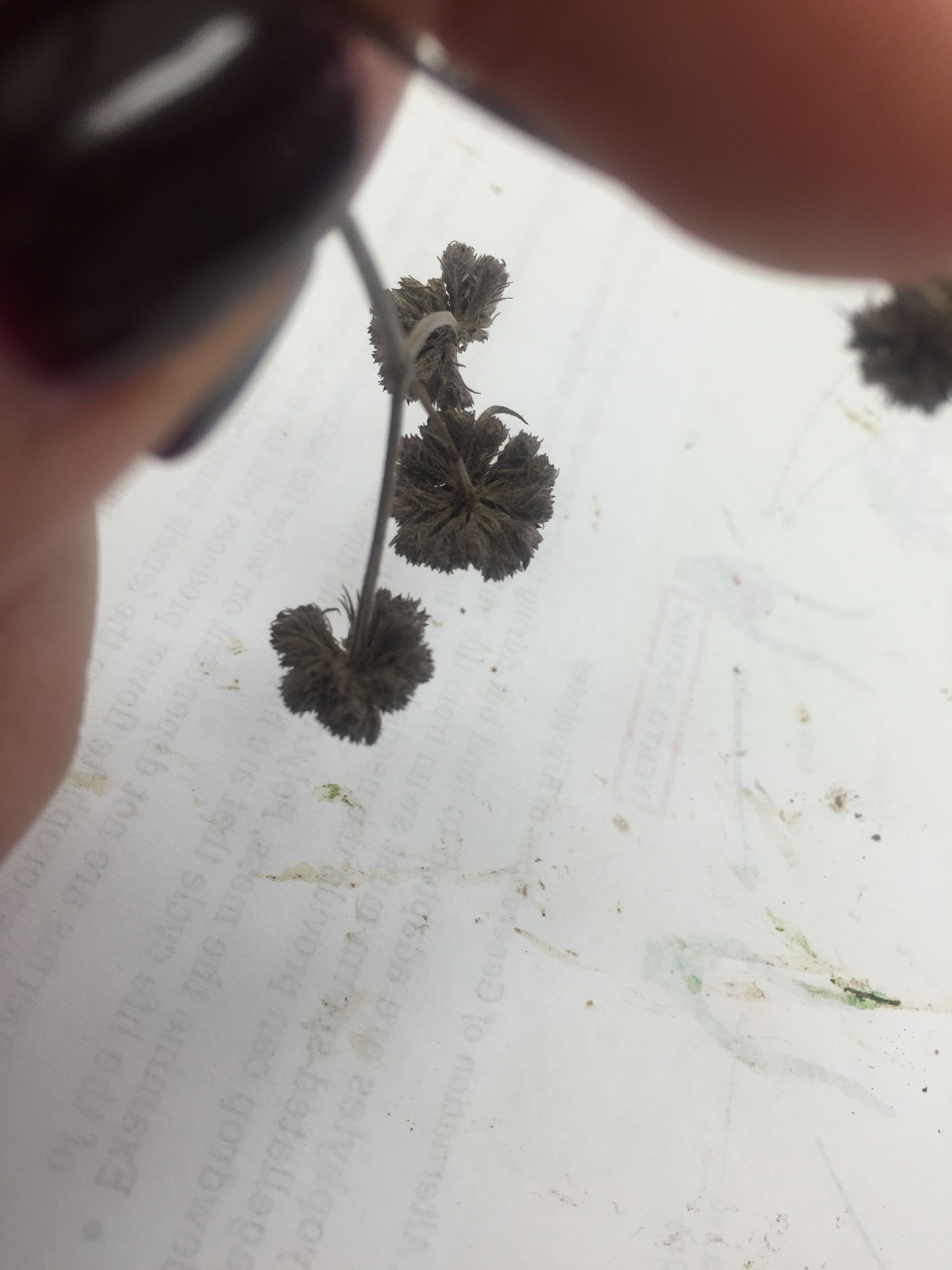 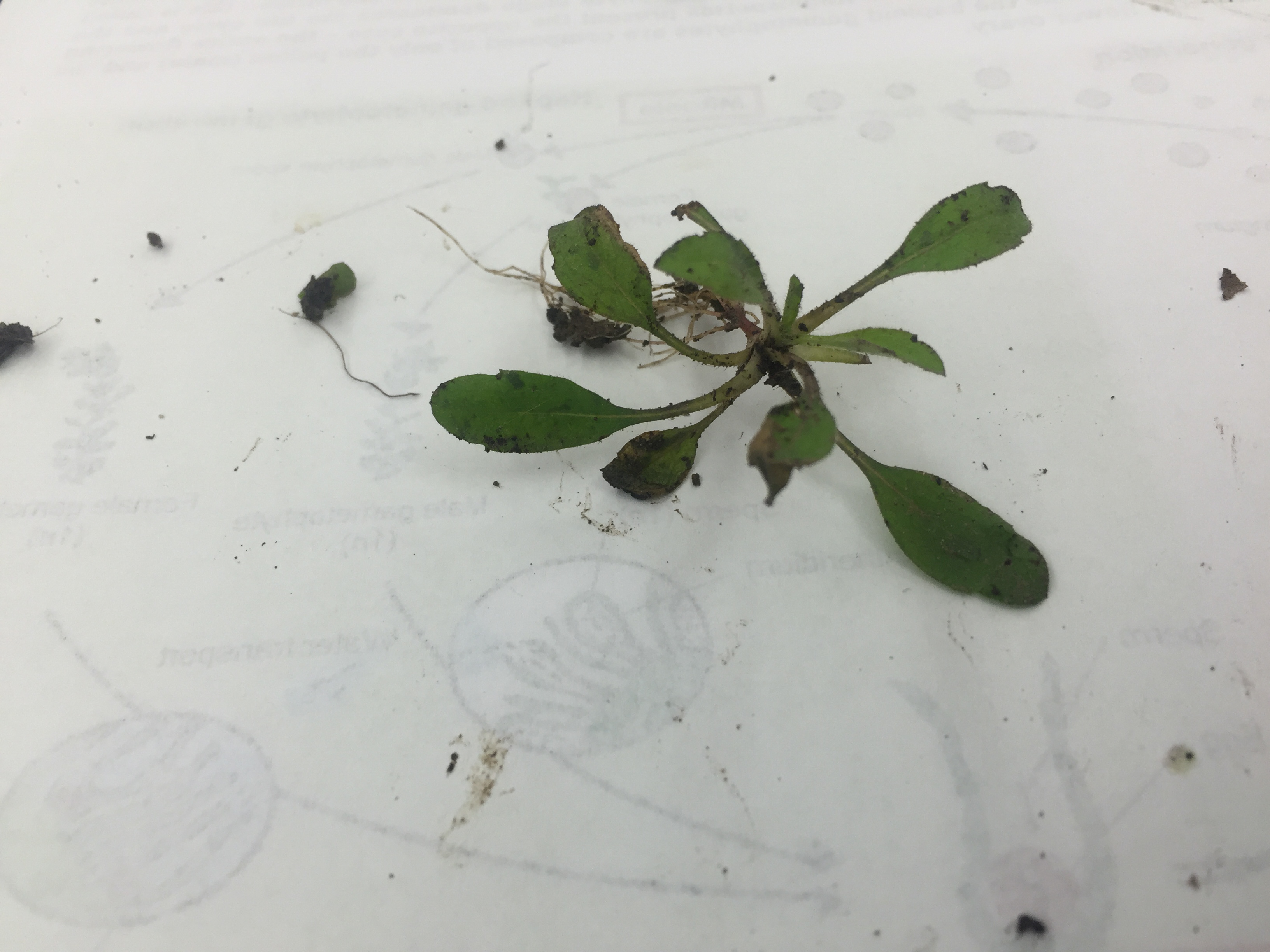 Purpose: In lab this week, the invertebrates collected over the prior week were examined and identified. Under a dissecting microscope, their size, motility, and overall appearance was observed in order to determine their class and phylum. Most of the organisms examined were expected to be Arthropods.

Materials & Methods: To complete this experiment, preparations were made the week before.

Purpose: The purpose of this experiment was to determine the effects of nicotine on Zebrafish development, in order to relate it to the effects on human development. Zebrafish were selected because they are easy to observe since they are clear and because their development resembles that of humans. Based on previous research, it was predicted the health of the treated fish would be impacted in a negative manner, affecting their movement and heart rate.

Materials & Methods: Over the course of two weeks, Zebrafish were observed in order to note the effects on development caused by exposure to nicotine. Embryos were received at about 24-48 hours old. Fourty-eight embryos were selected, only half of which were treated with nicotine. Two cell culture with 24 wells per plate were each filled with a single embryo. One of the plates was controlled and the other plate's water was treated with nicotine. Every few days the fish were observed. How many survived was counted and if needed the water was changed. Also, their movements were noted and their heart rates were taken. Once the fish were a few days old, they were fed. When the fish were a week old, three were selected from each plate to be anesthetized and then fixed and preserved in formaldehyde. The rest of the care and observations continued until the length of the experiment was completed. 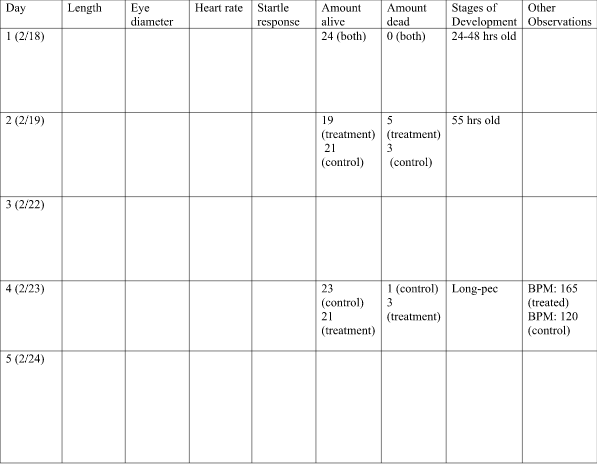 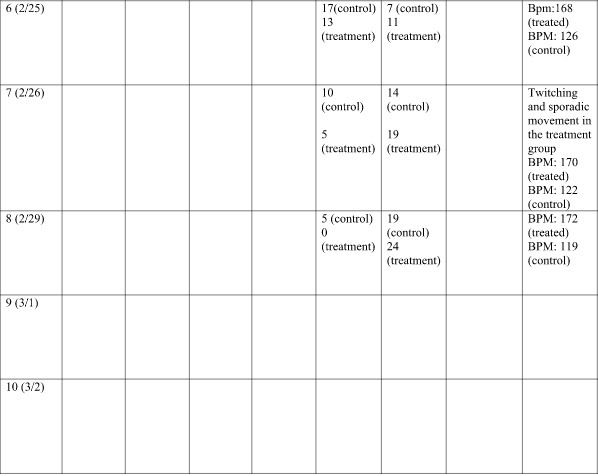 Table 1. shows the observations noted over the course of the experiment.

Conclusions Overall, the health of the non-treated Zebrafish seemed better. First of all, most of them outlived the treated fish. Their heart rates were also not as accelerated as the fish treated with nicotine, as seen in Table 1. In observation, the non-treated fish also appeared to have better reaction time. For example, when the six fish were fixed and had to be removed from their wells, it was significantly harder to remove the non-treated fish because their reaction time was faster. The differences noted in the fish was much like it was expected, favoring that nicotine is harmful in the development of Zebrafish. A flaw in this experiment was that none of the fish made it to the two week mark. A future experiment would be concerned with caring for the fish in a manner more of them can make it to the two week margin.