Here's a 19-bp perfect match melting curve. The empirical melting temperature is something like 52 C, while the consensus for several methods I modeled is around 52.5 C. I want to see if this result is repeatable, though. 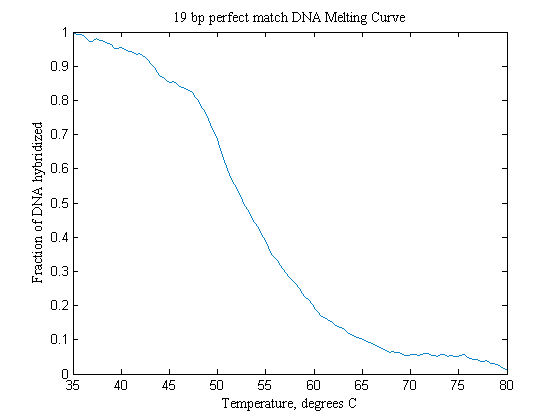 Using either NaCl or KCl (is there an advantage to one over the other? Does Na+ or K+ interact more with O-?). Original 19-bp sequence is fine ..

The module originally used 33uM as the concentration. I do not know why this was used - it seems rather high. Perhaps this was meant so that the fluorescence signal would be larger than background noise? [Yes, I'm pretty sure this is the case. -MS ]

Goal: show how the set-up can be used to investigate the significant effects of ionic particle concentrations on DNA melting parameters.

These conditions form an approximately logarithmic distribution between 0 M and 1 M. This is justified because the projected dependence of ΔS and ΔH on ionic concentration is also logarithmic. The 150 mM may be replaced by 100 mM if it is deemed more desirable.

It may be worth looking into the 50 mM concentration, because this is what PCRs are run at (50 mM KCl, specifically), and it is also what many of the models have actually been designed for.

C, T are pyrimidines (small)
A, G are purines (large)

The original 19-bp sequences that we tested were:

The mismatch is a pyrimidine-pyrimidine type. I would be curious to compare that to an SNP of purine-purine type would increase the differences, so for instance:

The original sequence has 8 G-C pairs, or 42%, which is in the middle of what seems to be the normal 20-60% range (for proks, anyway .. http://insilico.ehu.es/oligoweb/index2.php?m=all). I think this is a good representative sequence, and it may be redundant to bother with different G-C contents, since it's pretty well-established that the more G-C, the higher the melting temperature (presumably due to hydrogen bonding effects?). One thing I do wonder about is the relationship of G-C content to ionic strength sensitivity of the Tm values, since the triple H-bond format could interact differently with Na/K as compared to the 2-H-bond format. Anyway, that isn't that important, probably.

Between the 1-mismatch and many-mismatch cases, it would be nice to have a somewhat-mismatched case that could simulate the actual relationship between different alleles at homologous chromosomes' loci or a random construct trying to integrate into DNA.

I do not know if the top line is a typo or not .. it doesn't actually have 19 bp ... [These are the sequences that were shipped, and I was also surprised that this one was an 18bp, but that seems to be accurate -- we can order an actual 19bp for our experiments. -MS ]

This is not really a "total mismatch," but even if it hybridizes, (at the ends), it will probably always show up as ssDNA due to the behavior of the intercalating dye. Is it significant that the ends are where there is a pair of matching bases on either side? Why are all the matching bases A/T? Could this lead to self-annealing?

Most models for calculating the Tm values of DNA are only designed to be accurate for relatively short strands of DNA, ~15-50 bp. The Wallace formula, which has T proportional to length, obviously cannot hold up for long strands of DNA. The GC methods max out at around 80-some degrees C, which is much more realistic. However, for long strands of DNA, most people are not interested in a melting temperature, since all DNA melts at 90 degrees C. Thus, the region of interest corresponds to the region in which people design primers and other short segments of DNA.

The original lengths of 19 and 40 are okay, but it would be instructive if other lengths such as 30 or 50 were included in order to extract more H and S values and thus help with N-N validation analysis.

Here are sequences that could be used for the 20,30,40,50 series. I tried make them have similar GC content, and I checked for hairpins/loops by eye (using the computer-generated reverse complements). The Tm estimates should really be taken with a grain of salt.

This interesting paper actually lists a good number of methods (including the one we used in the module). http://bioinformatics.oxfordjournals.org/cgi/content/full/21/6/711. However, while it compares the methods thoroughly, it does not run the empirical experiments in order to see which one is actually right.

Here are a few models worth investigating:

While these models do include salt-correction terms and sequence-based terms, I have not seen any adjustments for mismatches (correction: found the Wetmur one above). Perhaps we could derive an approximate "mismatch cost" term? The first mismatch is the most costly, and after that, the subsequent temperature drop per mismatch is less until some point where there are so many mismatches that no hybridization is possible.

Here is a very basic python program for using these four methods. I have not yet included any considerations for salt and mismatches.